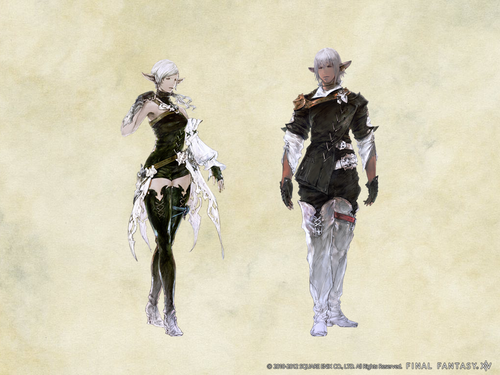 The Elezen claim to be the original inhabitants of Eorzea.

The tall and slender Elezen (エレゼン, "Erezen") were once the predominant race in Eorzea. Believing the realm to be theirs by divine right—a gift from the Twelve themselves, they continue to harbor a deep pride at being the chosen race of the gods even to this day. While this originally led to conflict with the invading Hyur tribe during the early Sixth Astral Era, they reached a mutual understanding and work towards mutual peace and prosperity to this day.[1][2]

Both clans possess hearing keener than that of the other races', with the Duskwight possessing a particularly heightened sense of hearing—even among Elezen. Their lifespan is longer than the other races' by about one- or two-tenths.[2]

On the First, members of this race are called elves and made up a significant population of Lakeland. Many of them continue to live in the region, inhabiting the Crystarium, but others are also found in the Rak'tika Greatwood and Eulmore.

According to their histories, the Elezen were the original inhabitants of Eorzea in the First Astral Era, and continue to take pride in this heritage to this day. For much of their history, they lived pastoral lives on the vast, fertile plains. It seems that, during the time of the Allagan Empire, a population of Elezen dwelled in Meracydia.[3] After the Sixth Umbral Calamity, they were again the most populous race in Eorzea, but were displaced by the great migratory waves of Hyur early into the Sixth Astral Era. Time and again, they waged bloody war with the Hyuran invaders.[2]

Some of those Elezen who left the plains of central Aldenard settled in the highlands of Coerthas in the central regions of Abalathia's Spine. There, they came into conflict with the dragons of the Dravanian Horde. Eventually, they founded the city-state of Ishgard and have continued to wage the Dragonsong War for over a millennium.[4]

The Elezen who moved to the Black Shroud after being displaced from their homes in central Aldenard came into conflict with the Hyur yet again when the invaders sought to colonize the forest as well. Ultimately, to ensure their mutual survival against the elementals of the forest, they forged the Pact of Gelmorra and created the subterranean city-state of the same name.[4] The Elezen of Ishgard would similarly come to welcome Hyur into their city-state.

Eventually, the Elezen and Hyur would leave Gelmorra to found Gridania.[4] As Elezen are very protective of their homes, a small but not insignificant portion of Gelmorra's Elezen citizenry refused to abandon their home. The descendants of these Elezen are the Duskwight, who largely continue to dwell in caverns and ancient ruins of their former city-state.[2] 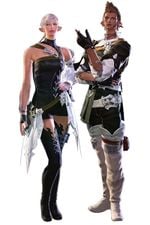 The Wildwood Elezen primarily live in cities such as Gridania. 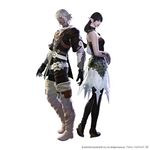 Duskwight Elezen dwell in caverns and the subterranean ruins of Gelmorra.

The most prominent of Eorzea's Elezen are the forest-dwelling Wildwood clan and the reclusive, cavern-dwelling Duskwight clan. Once, the clans were one, but split in the year 1077 of the Sixth Astral Era following the founding of Gridania. Because the Wildwood choose to live in the city and most Duskwight choose to eschew contact with outsiders, each clan tends to consider the other traitors to their race. Tensions between the two clans persist to this very day.[2]

The Wildwood Elezen of the Black Shroud also share a common ancestry with the Elezen of Ishgard, and they are considered largely indistinct from one another. The two have traditionally enjoyed close relations, with each readily coming to the other's aid in times of need.[2] The terms "Wildwood" and "Duskwight" seem defined by the relationship between the Shroud's Elezen, thus the Elezen of Ishgard would be considered different in ethnicity despite being essentially the same.

The Elezen are a proud people who value discipline and order above all, and are naturally adept at collaborative effort. They made great contributions to the founding of Ishgard and Gridania, and that they continue to stand is testament to their talent for governance. However, their preoccupation with history and tradition, tendency to relive past glories, and pretentious speech patterns can alienate them from other races.[2]

Elezen favor sharply-cut outfits that accentuate their slender physiques. Their adventurers' garb is crafted with an eye for fashion, down to the silverwork adorning it. Their heightened aesthetic sensibilities have led Elezen to make numerous contributions to fashion such as their unique tanning techniques and exquisite accessories.[2] These techniques were once heavily guarded by Elezen leatherworkers, but they have since agreed to share their wealth of knowledge.[5]

The Elezen originated the art of archery, and their longbow skills are one of two schools that form the foundation of the Archers' Guild.[6] They invented stringed instruments from the strings of their bows, which in turn led to fine arts such as song and poetry. Their long and graceful limbs lent themselves to dance, with myriad manifestations of Elezen culture spreading to the surrounding lands and peoples.[2]

While the Elezen have adopted the common tongue of the Hyur, their language isn't dead. Additionally, numerous words from their old tongue exist in the day-to-day vocabulary of other races, such as "rendezvous," "diplomat," and "espionage."[2] The forenames and surnames used by the race have changed little since the time when they first crossed into Eorzea from the north. However, over the ages, due to bad blood between the two clans, the surnames once commonly used by both have been claimed by one side or the other. While the structures and spellings of the names are extremely similar, and they follow the same phonetic rules, a Duskwight and a Wildwood Elezen will never have the same last name. The spelling and phonetic rules are extremely similar to those of real-world French.[7]