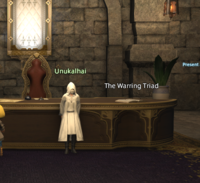 "It has ever been said that Eorzea is a land embraced by gods. For weal or for woe, I should wonder."

Inducted into the Scions of the Seventh Dawn at the recommendation of Urianger, Unukalhai's assistance has proven invaluable when dealing with entities of considerable might; this includes both primals incarnate and the Warring Triad. It is believed the masked youth has an ability not unlike the Echo which somehow shields him from the tempering gaze of the bestial deities. Though his age, origin, race, and ultimate intentions all remain mysteries, the Scions have yet to find reason to mistrust Unukalhai, and cautiously count him as one of their own.

Unukalhai is a Hyur found in The Solar.