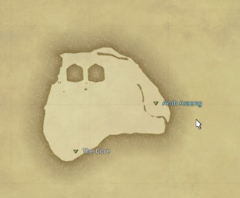 Map of The Empty

Type
Zone
Within
The First
Connects to
Amh Araeng (E)

The Empty is a region devastated by the Flood of Light on the First in Final Fantasy XIV: Shadowbringers.
It covers approximately nine-tenths of the world and is where Eden resides.

The Empty is a zone in The First.

The Empty was created by the Flood of Light that nearly consumed the entirety of The First, having only been stopped by the intercession of the Oracle of Light. Due to the nature of light aether, the aether in the region was brought to an almost complete standstill, leaving a barren wasteland nearly completely covered in nothing but featureless white terrain, not unlike The Burn found on The Source.

Detecting a powerful presence in the Empty suspected to be a Lightwarden, the Warrior of Light, Ryne, Thancred, and Urianger travel into the depths of the Empty where they find the dormant Eden. Making their way inside and subjugating the creature, they discover that Eden is capable of manipulating the surrounding aether. Theorizing that they could use Eden to return the flow of aether to the Empty and restore life to The First, they set out to pockets of the Empty that still have some aetherial activity, and use Eden to summon elemental Primals, which they then slay in order to disperse their aether across the Empty.

With each Primals defeat, life begins to slowly return to the Empty, though only in the area where Eden was first discovered. Eden is eventually revealed to be the Ascian Mitron, who was transformed into the first Sin Eater after Ardbert and his comrades defeated the Shadowkeeper. Mitron informs Gaia that she is the reincarnation of Loghrif, another member of the Convocation of Fourteen who fought alongside him against Ardbert; using the ambient aether released by Ryne and the Warrior of Light, Mitron merges with Gaia and attempts to create a "perfect moment" in which he and Loghrif can live together forever, but is defeated.

Following Mitron's defeat, the pocket of the Empty around Eden is transformed into a lush and verdant paradise, while Eden itself is enveloped in the branches of a colossal tree. Ryne and Gaia predict the effect will eventually spread to the rest of the Empty in time.

The Empty covers the whole region around Norvrandt. The player can freely explore only a small area that is accessible via a NPC in the south of Amh Araeng, as well as Eden's Core. Through the Eden raids, the player can also travel to the few parts of the Empty that still have strong aetherial activity.

A remix of "Blue Fields" from Final Fantasy VIII plays in the Camp area outside Eden. "Everywhere and Nowhere" plays inside Eden's Core. "Where I Belong" plays once the raid series has been completed.