In an effort to unravel the mystery of Dalamud, the esteemed Hildibrand—agent of enquiry, inspector extraordinaire—was thrust to the heavens, never to be seen again. Carrying on the great detective's legacy, Nashu Mhakaracca works tirelessly to unravel the many mysteries which beleaguer Eorzea. With taverns throughout Ul’dah abuzz with talk of unusual zombie activity, her powers of deduction will soon be tested.

If ever there was a crime to be solved, Hildibrand would surely be there to crack the case. Perhaps the greatest case of his time was Dalamud, and the prophecy foretelling its descent. Believing himself a hero of destiny, Hildibrand did bravely propel himself into the moon's path, but, alas, was never heard from again.

Hildibrand Helidor Maximillian Manderville is a Hyur found in Radz-at-Han. Agent of enquiry, inspector extraordinaire, he is a detective and part of the side story quest chain first released in Patch 2.1. Helped by his lovely and faithful assistant Nashu Mhakaracca, this suave individual brings his exquisite problem solving talents to Eorzea. Players can begin the Hildibrand storyline after completing

The Ultimate Weapon by taking the quest 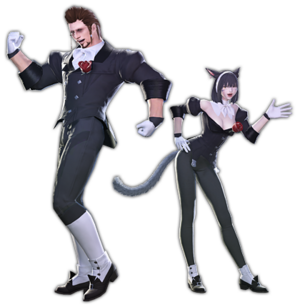