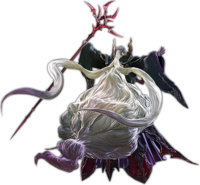 Ramuh is a boss found in The Striking Tree (Hard). He is the lord of the Sylph Beastmen Tribe. Ramuh is known as the Lord of Levin. He commands the power of lightning and thunder.

Ramuh is also a server in the Japanese Meteor Data Center.

Lightning given sage form, venerated by the sylphs. Though depicted in legend as a wise and benevolent elder who harbors ancient secrets, Ramuh is a merciless arbiter of those who would defile the sacred depths of the forest, striking down interlopers with fulminating bolts of lightning.

Whilst Ramuh is revered as the creator of the race of Sylphs, the appearance of his physical manifestation suggests that he is a god of man. Some scholars even go so far as to claim that he and Rhalgr are the same, pointing to the Destroyer's command over lightning as evidence of their theory.

While many races believe theirs to be the first sentient beings on the star, the creation myth of the Sylphs holds that the world of man was already long in existence before they appeared. The legends describe man as greedy, thoughtless creatures who brought destruction to the forest through steel and fire. Unable to escape the flames and axes, the trees reached out to the gods for succor. Ramuh, a god of man and born of lightning, using his levinstorms and levinorbs to bring life to the budding trees. Infused with the power of his lightning, the Sylphs were born as guardians of the forest, they came to dwell under the Black Shroud and its wide canopy, defending their land with the ancient wisdom of the Lord of Levin himself.

After dealing with the Garlean Empire and quelling the unrest in Ul'dah, the Scions of the Seventh Dawn turned their attention to the Black Shroud, where it is believed that the Sylphs had summoned Ramuh. Because the Primal had often not shown aggression towards the people, Kan-E-Senna hoped that the Scions would be able to convince the deity to forego hostilities. The Warrior of Light sought an audience with the Lord of Levin, and was eventually granted one after proving themselves to the Sylphs.

Ramuh condemned all peoples, not just the Garleans. He recognized the good deeds of the Gridanians and the other Eorzeans, but did believe that these did not excuse the deeds of the Garleans. Initially dismissive of the pleas of the Scions and the Warrior of Light for peace, he was however fascinated by the fact that the Warrior held the crystal that he himself entrusted to the Sylphs long ago. He forestalled his judgment as long as the Warrior engaged him in combat. And so it was that the Warrior of Light battled Ramuh to prove the truth of their justice, and Ramuh bequeathed the right to defend the forest and declared them a Champion of Justice.