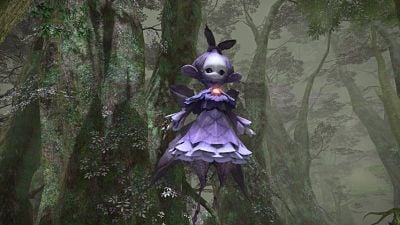 A diminutive people who dwell deep within the Black Shroud, sylphs resemble delicate dolls wrapped in vibrant leaves. By and large, these woodland folk hold favorable relations with other races, and have become an almost common sight since a trade in crystals was established. The Garlean invasion of the Black Shroud, however, has quickly soured the sylphs' view of outsiders.

Resembling delicate dolls wrapped in vibrant leaves, sylphs rarely use their twig-like legs for locomotion, preferring instead to float and flit from place to place. The method of flight is unique to the race: holding their bodies aloft through arcane will, the feather-shaped leaves on their back provide propulsion in a manner similar to an airship's aether-coated wings.

Sylphs derive all their nourishment from the process of photosynthesis, and do not require other sources of food. Water is the only substance they ingest directly, though certain of the race also favor a beverage made by squeezing the sap from milkroot. Essentially the equivalent of strong liquor, sylphs who imbibe the sap quickly show the effects of inebriation.

The elder sylph fills the role of mediator, but wields no authority to enforce laws as might a king or chieftain. As a result, attempts at race-wide diplomacy are largely meaningless, with Gridanians reciting a frustrating history of needing to treat with fickle individuals when bringing grievances to bear.

During pollinating seasons, certain sylphs can produce bulb-like seeds from the flowers that bloom atop their heads. Known as "podlings", these bulbs are immature sylphs who must be taken deep within the Black Shroud and incubated in the fruits of the Seedbed. The fleshy vegetation provides the podlings with all the warmth and nourishment they require, and when a bulb has sufficiently ripened, a new sylph will sprout from its casing. Young sylphs are raised by the race as a whole-the usual bond between parent and offspring almost entirely replaced by a deep sense of family within the overall community.

With how little importance sylph culture attaches to child-parent relationships, it stands to reason that the concept of family lineage so ingrained in other races is all but nonexistent. Accordingly, the woodland folk make no use of surnames, each individual identified exclusively by a single given name.

Sylphic gender, or lack thereof, can also be confusing for outsiders to comprehend. Those sylphs who possess both stamen and pistil are capable of producing bulbs, and are classified as everblooms. Generally considered "male" by other races, their names are characterized by the "xio" suffix. Sylphs whose names end in "xia" are known as lateblooms, a classification which stems from the trait of flowering at irregular times during the pollinating season. The "females" of the race, the lateblooms' inability to produce podlings is balanced by an innate talent for the arcane arts, their undiluted reserves of aether giving them the potential to become powerful spellcasters.

Many sylphs are skilled in the languages of other races, their interactions with both men and beastmen driven by an irrepressible curiosity. It was these qualities that long ago led the woodland folk to join hands with ambitious merchants, and aid in the establishment of a thriving trade in crystals.

Sylphs are adept at weaving fibers from a variety of sources, be it plant, ochu vine, or cocoon. They also excel at dyeing their creations, and are known for producing threads and fabrics of extraordinarily vivid hue.