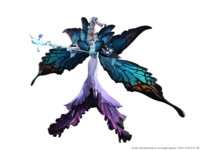 Titania is a boss found in The Dancing Plague.

Titania is the king of the Pixies Beastmen Tribe, and the Lightwarden of Il Mheg.

Before becoming Titania, Titania was a kind-hearted pixie who befriended Tyr Beq, and helped create the dreamland Lyhe Mheg.

United the Pixies, Amaro, and possibly the Nu Mou of Il Mheg against the invading Sin Eaters. The manner in which Titania united them reminded the pixies of the King of Voeburt, and they begain calling Titania king. The Amaro, out of respect for Titania also begain using the term king. Led the Il Mheg alliance in battle against the first Lightwarden near The Church at Dammroen Field. Their battle left the northern face of the mountians scarred. Titania defeated the lightwarden, but was corrupted by the light and becoming the new lightwarden ending the alliance and, eventually, being sealed away inside Lyhe Ghiah. Was defeated by The Warrior of Darkness and succeeded by Feo Ul.