This time, the faux commander wishes to hear a tale of heart-stopping terror and victory against impossible odds, for which your climactic encounter with Titan seems the perfect candidate. You cast your mind's eye back to that fateful day, when you stood on the very precipice of certain doom...

The Navel (Unreal) is a level 80 trial introduced in patch 5.4 with Shadowbringers.

To be eligible for the Fantastic Mr. Faux quest, players must first complete the Shadowbringers main scenario and Keeping Up with the Aliapohs, then speak to the Painfully Ishgardian Man in Idyllshire (X:7.0, Y:5.9).

The Navel (Unreal) is a retelling of the classic encounter between the Warrior of Light and Titan, an earth-based primal brought into existence by local kobolds through the power of worship. The battle bears many similarities and differences to the original version, though the arena and cinematics are still identical. Below is a list of mechanics and phases you will endure throughout the encounter.

Just like previous battles against Titan, the circular arena has no edges, meaning players can be knocked (or walk over) the edge at any time. Also, it is best to keep Titan at the northern edge of the arena, facing him away from the rest of the raid so that teammates are not cleaved by his vicious Mountain Buster (AoE cleave). Whilst doing so, the rest of the raid (excluding the off-tank) should remain behind Titan at all times to bait specific mechanics, such as the constant Landslide's.

Once the fight commences, Titan will continuously loop through four basic abilities in the same order until his health has been sufficiently decreased, starting with:

At this point, Titan will loop back to Landslide and repeat the process until his health is sufficiently decreased. Once he has reached about 80% health, Titan will cast Geocrush, temporarily leaping out of view. After a delay, he will land back into the arena with such force that the outer rings will begin to collapse, shrinking the arena to a smaller size and dealing proximity damage based on how close players are to the arena centre. As a result, all players should move as close to the edge as possible whilst avoiding the section that is about to collapse.

Once Titan has completed the first Geocrush, he will then enter a second mechanical loop until sufficiently damaged, starting with:

Regardless of the Half-Bomb pattern, Titan will reset the mechanical loop and unleash the first Landslide shortly after the bombs have dropped, then go back to Gaol + Upheaval, etc, repeating the loop until he has been sufficiently damaged. When enough damage is inflicted, he will once again leap away via Geocrush, eventually shrinking the arena even smaller and forcing the raid to stand near the edges to reduce proximity damage.

Just like previous versions of the encounter, Titan's Heart will eventually be exposed, presenting the raid with a DPS check, forcing them to destroy the heart before Titan can enrage. Assuming the raid is successful, Titan will temporarily leap away, then return to the arena and unleash Earthen Fury - a vicious raid-buster that will require fierce mitigation and healing to survive.

After Titan's heart has been destroyed, two adds will be summoned into the arena that should be picked up by the off-tank and taken to the east or west side of the arena. Much like Titan himself, both adds should be faced away from the raid, as they will aim their very own Landslide attack towards their primary target.

To make matters worse, Rock Buster will become Mountain Buster once again, meaning tank-swaps will be required due to Vulnerability stacks. Titan will also utilize the five-pronged Landslide whilst another pattern of Half-Bombs fill the arena in a double-pattern - one earlier than the other. As a result, players should bait and dodge the Landslide as a group (just like before), then position themselves within the second pattern of bombs until the first has exploded, then use the newly created safe-zones to avoid the second pattern of explosions, all while burning the adds down as soon as possible. Bear in mind that once the adds have been slain, they will each leave behind a persistent puddle that should be avoided for the rest of the encounter, so make sure that they are slain at around the same time, otherwise, the off-tank may be forced to move away from the first puddle and leave a second one further away, leaving even less space for the raid to work with later.

For reference, here's a mini timeline of events:

From here, the raid will need to contend with Tumult (multi-stomp AoE), Upheaval (stomp-knockback), and a double-set of Weight (AoE circles beneath players). Unlike previous versions of Weight, a second wave will immediately be cast after the first has detonated, so make sure the raid is stacked together to bait the first AoE circles, then dodge them in the same direction to bait the second wave.

Having survived the ordeal, Titan will unload another Landslide before the phase begins to loop once more, respawning the previous adds and initiating another wave of Half-Bombs.

The final loop will continue until Titan enrages. Time is of the essence! 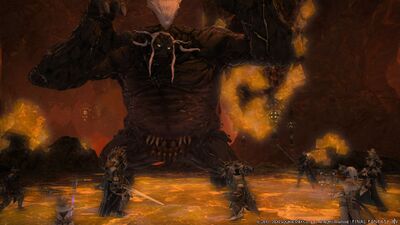