The faux commander demands of you a tale to tear at the heart and grip the soul, and for this there is certainly no better inspiration than your fateful confrontation with Shiva. Turn your mind to that most tragic of primals, and find what dreams of ice may come...

The Akh Afah Amphitheatre (Unreal) is a level 80 trial introduced in patch 5.3 with Shadowbringers.

To be eligible for the Fantastic Mr. Faux quest, players must first complete the Shadowbringers main scenario and Keeping Up with the Aliapohs, then speak to the Painfully Ishgardian Man in Idyllshire (X:7.0, Y:5.9).

Akh Afah Amphitheatre (Unreal) is a retelling of the classic encounter between the Warrior of Light and Lady Iceheart, who became a vessel for Shiva during the Heavensward main scenario questline. The battle bears many differences to the original version, though the arena and opening cinematic are entirely identical. Below is a list of mechanics and phases you will endure throughout the encounter.

One of the more notable factors of the encounter is Shiva's weapon-based attacks which she employs throughout the battle in a semi-random fashion; Frost Blade, Frost Bow, or Frost Staff. Players will need to react in certain ways depending on which weapon Shiva acquires - each one being indicated by different animations and involving different mechanical rotations.

The first phase will persist for as long as Shiva retains higher than 80% health. During this time, Shiva will incorporate only two of her three weapon-based attack patterns: Frost Blade or Frost Staff. Bear in mind that Shiva will begin the encounter by randomly selecting one of the two weapons, each of which is followed by set mechanics, followed by going Unarmed (which also involves two set abilities) before switching to the other weapon. This process will repeat until Shiva has dropped below 80% health.

Shiva will eventually summon four adds within the arena that will need to be gathered by a tank and burned down by the raid. The adds themselves do not utilize any special abilities nor hit for too much damage, so they can be safely collected by a single tank and pulled close to Shiva so that the raid can cleave them all together. Whilst dealing with the adds, Shiva will swap to her Frost Blade form, so if you're using the typical two-tank format, make sure the tank with Slash Resistance Down handles the adds, while the other handles Shiva herself without the risk of extra damage from the weapon-based debuff.

Bear in mind that because Shiva is brandishing her Frost Blade, the raid must still contend with Glacier Bash and Icebrand (just like earlier), so everyone must remain mindful of when to avoid her stun-capable cone-AoE (Glacier Bash) or stack together to share damage (Icebrand) whilst burning down the four adds.

After 60 seconds have passed, or if Shiva reaches a specific health threshold, she will begin to deep-freeze the entire raid via Diamond Dust much like she does in earlier versions of the battle. The raid must ensure that all adds have been destroyed beforehand, as failure to do so will result in a full raid wipe. Assuming the raid has successfully destroyed all four adds, the raid is treated to her popular face-stomp transition, stepping on a random raid-member to break the entire raid out of deep-freeze and inflict raid-wide damage in the process, initiating the third and final phase of the encounter.

Having reached this point in the battle, the outer ring of the arena will now become a hazard - freezing anyone who touches it into a block of ice that will inflict damage-over-time until the victim perishes, unless members of the raid break them out of their icy prison via sufficient damage.

Depending on previous damage done, Shiva will be floating around 75-70% health at this time, and the raid will now be in a race against her passively stacking Dreams Of Ice damage buff. From here on, everyone will need to contend with another semi-random turn of events based on which weapons Shiva utilizes, which will now also include her Frost Bow.

Now that you know what to expect, the fight will continue until Shiva has been defeated, or the raid wipes, keeping in mind the soft-enrage of her ever-stacking Dreams Of Ice buff throughout the entire ordeal. 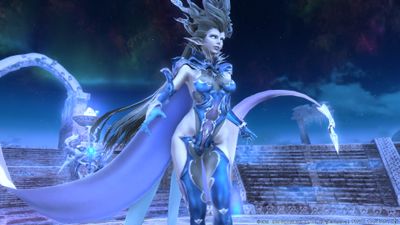