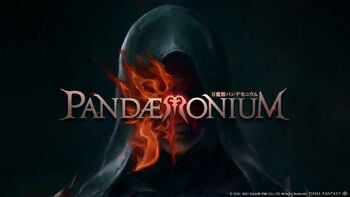 Asphodelos is the first section of Pandaemonium, released on December 21, 2021. It requires a minimum item level of 565.

Unlock: Completion of the level 90 quest chain starting with

The Crystal from Beyond by talking to Nemjiji in Old Sharlayan (X:9.6 Y:11.9). Players first must complete Main Scenario Quest

Asphodelos (Savage) is a tougher version of Asphodelos, released January 4, 2022.

Abyssos will be the second section, to be released during late August 2022.

Abyssos (Savage) will be released one week after the regular version of Abyssos.

Far beneath the ground upon which mortals tread, steeped in darkness deep as starless night, ancient power lies dormant. Too hungry, too brutal, too monstrous─what cannot be controlled must be contained, here, in Pandæmonium. Dare you make the descent?

Pandemonium is also a server in the Japanese Mana Data Center.