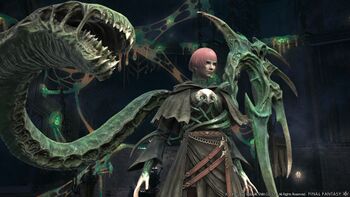 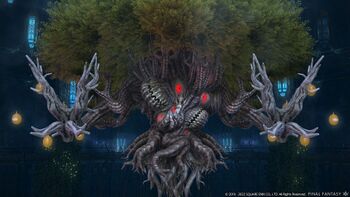 Abyssos (Savage) is 2nd section of Pandaemonium (Savage), the main 8-player raid in Endwalker. Released on August 30, 2022, Abyssos (Savage) requires players with item level of 600 or higher to enter. Once unlocked, the raid can be queued from the Raid Finder.

To access Abyssos (Savage), players must speak with Nemjiji in Labyrinthos (X:8.4 Y:27.4) with a level 90 Disciple of War/Magic after completing the quest,

Upon completing Pandæmonium: Abyssos (Savage) duties, a treasure coffer will appear containing an Abyssos Coffer. Using this item transforms it into gear corresponding to the user's current job. In addition, the coffers that appear upon completing Abyssos: The Eighth Circle (Savage) yield weapons.

In addition to gear, players will receive an Abyssos Mythos from each area, which can be exchanged for gear of your choosing.

By speaking with Mylenie in Labyrinthos (X:8.3 Y:27.6) or Djole in Radz-at-Han (X:10.3 Y:9.6), players can exchange Abyssos Mythos from Pandæmonium: Abyssos (Savage) for corresponding gear.