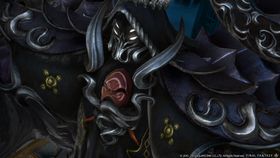 Hearken unto a requiem for a hero fallen. A man who lived a thousand thousand of our lives clinging desperately to faint hope, never shirking his sworn duty to his long-lost brethren. A man who stood proud and did avow his true name on the threshold of the battle that would see him fall to his rival─the light to quench his shadow. Borrowing liberally from the funereal rites of the Night's Blessed, the minstreling wanderer weaves an elegy in that hero's honor─the tragic-yet-triumphant tale of a man and a battle that ne'er shall be forgotten.

The Minstrel's Ballad: Hades's Elegy is a level 80 trial introduced in patch 5.1 with Shadowbringers.

Players must have completed

Shadowbringers (Quest) and the quest

Minstrel from Another Mother, then the trial will be available from the Minstreling Wanderer in the Crystarium.

Just like normal mode, your encounter with Emet-Selch (Hades) takes place within a circular arena overlooking the ruins of Amaurot, deep within the Tempest. Thanks to a small outer railing during the opening phase, players will be incapable of falling over the edge. However, the railing will eventually be destroyed as the fight progresses, meaning players can plummet to their doom if they stray too far.

Below is a list of all Hades' abilities and phases.

If Arcane Utterance spawns Red Orbs, they will eventually explode in an AoE fashion once Hades casts Arcane Control. However, one orb will be noticeably missing within the arena, indicating where players should stand to avoid the explosions. For reference, players can check the circular patterns on the floor, as the circles on the floor indicate the radius of the orb explosions.

If Arcane Utterance spawns Blue Mirrors, they will eventually shoot straight-line AoE's in the direction they are facing once Hades has cast Arcane Control. However, one mirror will be noticeably missing, and a mirror in the centre of the platform will be pointing towards the gap, meaning the gap is not safe. To avoid, players will need to stand behind the mirror opposite the empty space.

Once Broken Faith has concluded, the previously unused Arcane Utterance effect will take place. For example, if the first Arcane Utterance involved Red Orbs, players will now be dealing with Blue Mirrors. Once the alternate Arcane Utterance has concluded, Hades will execute another Shadow Spread (doubled cone-attacks), Bad Faith (double wall-attacks), Ravenous Assault (double tank-buster) before entering an enraged state, imposing a DPS check via Ancient Dark IV. If Hades hasn't been sufficiently damaged before the cast goes off, the party is vocally deemed 'unworthy' and suffer an unavoidable wipe.

Assuming the group manages to push Hades to 10% health or lower, they will transition to a new phase, and can even skip various mechanics if the overall DPS is high enough.

As the arena submerges into total darkness, shades of various ascians that you have defeated in the past will be summoned to the arena, each one utilizing different mechanics.

A shade of Nabriales will appear in the middle of the platform and begin to long-cast Quake III. If successfully cast, the raid will suffer unavoidable damage depending on how much HP the shade had left. The group will need to reduce the shades health to at least 50% or lower to survive.

To complicate matters, pairs of Comets will slowly begin to descend into the arena simultaneously, indicated by circles on the ground. Much like all other comet mechanics, at least one player will need to be occupying a circle before the comet reaches the platform. If any comet reaches the platform unsoaked, the raid will be wiped. Unfortunately, a hefty number of comets will continuously drop in pairs for a large portion of the Nabriales add phase, rotating around the arena with each drop. As a rule of thumb, both tanks should work on soaking the comets (with cooldowns) so that the rest of the raid can maintain uptime on Nabriales.

Furthermore, four Shadow Of The Ancients will eventually enter the arena - each one tethering itself to a damage dealer. After a delay, the shadowy ancients will aim a blast at their respective (tethered) victim that inflicts high damage and debuffs. As a result, all tethered players should try to avoid aiming their tether towards other members of the raid - especially those who are soaking comets, as doing so will likely result in their death(s).

After the ancients have blasted their tethered victims, both healers will acquire a stack-up marker via Ancient Water III, and each tank will be marked by an AoE circle via Ancient Darkness. The raid will need to be split in half so that each healer has sufficient people to absorb the damage, whereas tanks will need to ensure that they do not overlap the stacking groups with their AoE circles.

Once Ancient Water III + Ancient Darkness has resolved, the shade of Nabriales will finalize its Quake III cast, dealing damage based on how much health it had remaining.

Shades of Igeyorhm and Lahabrea will enter the arena as tankable adds and immediately pepper the raid with Fire Sphere and Blizzard Sphere, inflicting all members of the group with either a Fire Brand (increased damage from fire mechanics) or Freezing Brand (increased damage from ice mechanics). At this point, each shade should be kept apart while being destroyed, and players with Fire Brand should only attack (or tank) Igeyorhm (ice-aspected) whilst those with Freezing Brand should only attack (or tank) Lahabrea (fire-aspected).

Each shade will frequently utilize a mini-tankbuster which is not overly dangerous by itself, but if a fire-branded tank takes on Lahabrea (who is fire-based), the results will be nasty. Furthermore, the raid should make an effort to kill both adds as close to simultaneously as possible.

Soon after, four Shadow of the Ancients will appear within the arena - one in the north, south, east, and west. All four ancients will tether themselves to random players - two of the tethers being ice-based and two being fire-based. After a delay, the ancients will bombard the tethered victim with AoE damage of the tethered element. Seeing as players take increased damage from mechanics of the same element to their brand, the raid will need to swap or intercept tethers so that they do not have a tether of the same element, as failure to do so will likely be fatal. Furthermore, anyone designated to taking tethers should make sure that they are not standing close to other players, as the AoE damage from the ancient shades may overlap.

For best results, each tank and healer should intercept tethers (opposite to their respective elemental brand) so that the damage dealers can maintain uptime on Igeyorhm and Lahabrea, away from the designated tether holders.

Once the tethers have resolved, Igeyorhm and Lahabrea will cast another Fire Sphere and Blizzard Sphere, causing all ice and fire brands to be reversed. As a result, a tank swap will likely be required. Once both shades have been defeated, Igeyorhm and Lahabrea will merge into Ascian prime, much like they did in the The Aetherochemical Research Facility back in Heavensward.

After merging into the dreaded Ascian Prime, it will immediately cast Universal Manipulation, reducing the HP of all participants to single digits. Soon after, all players (based on role) will acquire a collection of overlapping debuffs. Meanwhile, the Ascian Prime will be long-casting Blight, which will take place once all debuffs have been resolved.

All Tanks and Healers will be afflicted with:

All Damage Dealers will be afflicted with:

One method of dealing with the onslaught of debuffs is to have healers immediately start healing to cure off all Doom debuffs as soon as Universal Manipulation has been cast. During that, each tank and healer should stand close to the centre of the arena at cardinal positions around Ascian Prime (north, south, east, and west of its hitbox), which ensures that their eventual Ancient Circle donut AoE's are in manageable positions, providing a safe spot right in the centre so that no other tank or healer will be clipped.

Meanwhile, each damage dealer should pair-up with a tank or healer - standing behind them with their back to the outside so that they will receive fatal damage from Ancient Circle, removing their Beyond Death debuff. As a result of taking damage, damage dealers will also be knocked back to the arena edges via Off-Balance (assuming they have their back turned to the outer edges), safely away from all other party members. Once achieved, all damage dealers will then need to turn away from the tanks and healers in the centre to avoid the petrifying gaze of Cursed Shriek. Just remember that Off-Balance will knock you backwards in the opposite direction you are facing, so be sure you are facing the right direction for the knockback before turning away from the gaze attack afterwards.

After the knockback, damage dealers should remain in position until their Forked Lightning detonates.

With enough overall DPS, some of the above mechanics will be skipped.

Assuming the raid successfully slay the shade, Hades will return to the arena and the final phase of the encounter begins.

Throughout the rest of the encounter, Hades will no longer be moveable, remaining rooted to the north of the arena with a much larger non-directional hit-box. Whilst in this form, the target with the highest enmity (typically the tank) will be constantly peppered by ranged auto-attacks in-between all other mechanics. Furthermore, the arena itself will no longer have an outer railing, meaning players can accidentally walk (or be knocked over) the edge. Thankfully, any player who falls to their death can be resurrected after a moderate delay.

To deal with the overlapping mechanics, each healer should move to the smaller safe-lines near Hades (one per safe-zone) whilst the tanks and unmarked damage-dealers split up to help soak the stack markers. Meanwhile, the two damage-dealers marked with AoE circles should use the larger safe-slices to move as far away from Hades as possible. Once their puddles begin to drop, they will have plenty of room to drop each of their three puddles (one after another). Once all mechanics have resolved, the AoE puddles will persist for quite some time, so be wary.

-- If Shadowstream is cast - Hades will emit a non-telegraphed column straight through the middle of the arena, indicated by a large ball of dark energy swirling in front of Hades' face. If you notice the animation, simply move to the east or west side of the platform to avoid the upcoming blast (whilst also avoiding the growing Dark Seal orbs).

-- If Polydegmon's Purgation is cast - Hades will emit an inverted version of Shadowstream (see above). Instead of a column AoE through the centre, Hades will instead blast the left and right side of the arena, leaving only the centre as a safe spot. In either case, all players will also need to avoid colliding with the growing Dark Seal orbs.

After reaching this point, Hades will begin to loop the above mechanics until his health has been dropped to 30% or lower. Once that has been achieved, players will have to deal with an Active Time Maneuver, much like they did in normal mode.

With the whole raid taking continuous damage over time, Hades will unleash another set of travelling AoE's via Dark Current, followed by another Gigantomachy (raid-wide blast), and one final Quadrastrike (multi-hitting raid-swipe) before entering an enraged state, long-casting a super-powered Gigantomachy that will wipe the raid if Hades isn't defeated beforehand.

Do Not Sell My Personal Information
Retrieved from "https://ffxiv.consolegameswiki.com/mediawiki/index.php?title=The_Minstrel%27s_Ballad:_Hades%27s_Elegy&oldid=314711"
Categories: