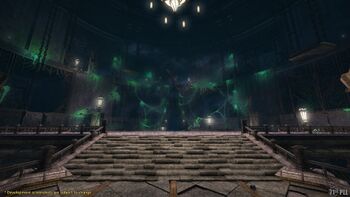 Abyssos is the second section of Pandaemonium, the main 8-player raid in Endwalker. Released on August 23, 2022, Abyssos requires players with item level of 585 or higher to enter. Once unlocked, the raid can be queued from the Duty Finder.

Completion of the level 90 quest chain starting with

An Unwelcome Visitor by talking to Claudien in Labyrinthos (X:8.6 Y:27.5). Players first must complete Chronicles of a New Era quest

Who Wards the Warders?.

To unlock each floor after the first, continue the quest line and complete the consecutive floor. Each floor is listed separately.

Treasure coffers that appear upon completing Abyssos will not yield gear, but instead yield tokens that can be traded for gear of your choosing.

You can only receive one token per individual Abyssos raid each week. In the event you are awarded a token from the loot list, you relinquish your right to vie for all remaining tokens regardless of whether you selected Need or Greed.

Also note that there is no weekly restriction on entering Abyssos.

Reward eligibility will be reset every Tuesday at 1:00 a.m. (PDT).

Upon completing Abyssos: The Eighth Circle, players can also earn an Unsung Blade of Abyssos once per week. This reward can be exchanged with Mylenie in Labyrinthos (X:8.3 Y:27.6) or Djole in Radz-at-Han (X:10.3 Y:9.6) for Ultralight Tomestones, which can in turn be exchanged for weapons.

After a battle hard-fought, order has been restored to Asphodelos. However, the inner circles of Pandæmonium remain in the grip of a mysterious force, and the remaining warders are nowhere to be found. You and your allies steel yourselves to press forward, but what awaits in those unknown depths may shake even the most steadfast resolve.