Jobs are an extension of their base classes, and require a Soul Crystal to activate. A job is a strict upgrade, and there is no reason to remain playing a base class once the job is available.

Each job acquires additional role-specific actions based on the job's role in group content (Tank, DPS, or Healer). A job's role is very important, because most duties have role requirements:

Originally, a secondary class was required to unlock each job. With the release of Stormblood, this is no longer required. Each class can advance to its corresponding job at level 30 regardless of the levels of your other classes. Advancing from a class to a job requires you to finish your level 30 class quests as well as the main story quest Sylph-management.

Jobs added with expansions do not have a base class and receive their Soul Crystal as soon as they are unlocked. They also start out at higher base levels.

Jobs are not mutually exclusive. Given enough time, you can level all classes and jobs on a single character.

This list includes all jobs with their base (level 1-30) classes.

1. Although Rogue/Ninja has no specific prerequisites, it is not available as a starting class, so you must first follow the same steps as acquiring any other class: unlock class-changing (level 10) and gain access to Limsa Lominsa (level 15, unless you started there).

3. To unlock Heavensward jobs, you must progress the main story to the end of A Realm Reborn and unlock the city of Ishgard.

Blue Mage was released during Stormblood, it was made available to all players regardless of whether they owned expansions, hence its position in this table. 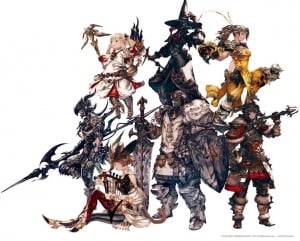 Jobs have specialized abilities aimed to perform specific roles in a group setting. Jobs are at the same level as their corresponding classes and can be thought of as specialized modes of the base classes. There are ten jobs in A Realm Reborn (2.0): Warrior, Paladin, Monk, Ninja (2.4), Dragoon, Bard, White Mage, Black Mage, Summoner and Scholar. Heavensward (3.0) added three new jobs: Dark Knight, Astrologian and Machinist. Stormblood (4.0) further added two more jobs: Samurai and Red Mage. Shadowbringers (5.0), like Stormblood, added two new jobs: Gunbreaker and Dancer. Unlocking a job awards its Soul Crystal, which is required to change from the player's current class to a more specialized job. Each job has its own crystal which can be equipped via the Armoury Chest.

Jobs have some unique features:

Paladins are front-line specialists, sporting a veritable arsenal of defensive and supportive tools to protect both themselves and their allies. Paladin's also utilize MP to heal their comrades and to deal burst damage. Paladins possess a unique ranged spellcasting period in their rotation, and a strong cooldown that makes them completely immune to all damage for a period.

Warriors are mighty front-liners wielding terrifying two-handed axes which are used to perform huge burst damage after filling their Beast Gauge. Unlike their tanking counterparts, Warriors forgo some mitigation abilities in exchange for a massive health-pool and strong self-healing abilities, as well as a strong cooldown that, rather than preventing damage, simply prevents them from dying for the duration.

Dark Knights strive to occupy the proverbial middle-ground between Warrior and Paladin, providing the player with a balanced offering of mitigation and damage-dealing tools, complemented by their skill with two-handed greatswords. They use MP as a secondary resource for executing powerful magical attacks. Dark Knights possess powerful self-shielding abilities, and have a cooldown that lets them continue attacking even after having been "killed", potentially returning to life without interruption if healed sufficiently during the short period after their ostensible death.

Gunbreakers blend solid damage, mitigation, and utility into a straightforward playstyle. They possess consistent combos that generate Cartridges, which can be used to increase their damage further or to aim special abilities (such as shields or regen) at party-members. The possess a cooldown they, while it reduces them to only 1 HP, makes them immune to nearly all attacks and abilities for a duration thereafter.

White Mage is a straightforward healing class that forgoes utility to provide immense healing output and regeneration effects to their allies. In times of need, they can also blast their enemies with devastating elemental attacks, including a powerful AoE stun.

Scholars, accompanied by their faithful healing pets, pepper allies with powerful barriers whilst debilitating enemies with their devastating damage-over-time (DoT) effects. At great need, they can call more powerful versions of their pet to the battlefield to augment their allies' defenses.

Astrologians are masters of fate that provide healing and regeneration to their allies. They have a unique Card system that allows them to provide damage buffs to fellow party members through use of their Star Globe, and a large number of cooldowns to provide all manner of utility or damage as the fight demands.

The Sage is a job that provides healing, damage, and sometimes both at once. Using their Nouliths, they can enhance their skills to provide their party with potent barriers.

Dragoons are famous for launching themselves across battlefields and decimating their foes using lance-based weapons, often bombarding enemies with vicious leaping attacks and positional combos. They draw upon the Blood of the Dragon to augment their abilities, occasionally being even further empowered for short periods by Life of the Dragon.

Reapers fight using both the scythe they wield and the void avatar they command. They must first harvest their victims to build up the Soul gauge, which is used to feed their avatar to deliver powerful attacks. The avatar builds up the Shroud gauge, which turns you Enshrouded, empowering your own attacks even further. Reapers can combine their spirit with the avatar for an even more powerful, temporary boost in power.

Monks are very agile combatants that deal impressive sustained single-target damage, darting across the battlefield to annihilate foes with lightning speed using their fist-based weapons and martial techniques. Unique amongst the melee, nearly every single one of the Monk single target abilities gains additional damage or functionality by attacking from a certain angle relative to the target. They also have a Chakra system that allows them to build to powerful attacks as combat progresses.

The Samurai uses a two-handed katana to deal out tremendous single-target damage. Their attacks are slow, methodical, and deliberate, yet extremely potent, able to carve even the most stalwart opponent into mere ribbons. Samurai seek to generate Sen, symbols of their mastery of the blade, which they can then leverage to unleash one of several powerful finishers.

Ninjas are agile and elusive fighters that utilize ninjutsu and dual-daggers, slicing unsuspecting foes from the shadows in the blink of an eye. By using the right combination of mudras, they can also blast enemies with a variety of elemental attacks. Their ace-in-the-hole, Trick Attack, also increases the damage a target takes from all sources.

Bards are bow-wielding ranged damage dealers sporting mobility, utility, and a proc-based combat style that debilitates enemies through damage-over-time effects wrought by their skillful bow shots. Through the power of song, they can also provide party-wide buffs and inspire their allies to greater feats of damage, whilst their own attacks cycle through 3 different distinct periods based on the song they are currently playing.

Machinists are gun-toting tinkerers that specialize in blasting foes in rapid succession, building up their Heat gauge, which is used to fuel their abilities further. They can also deploy an automaton to assist the player in combat temporarily.

The Dancer is a highly-mobile job providing damage, utility, and support capabilities to those around them while slicing their enemies with throws of their vicious bladed chakrams. Dancers can also choose a party member as their Dance Partner, further empowering that party member by echoing the effects of several of the Dancer's abilities on that player. Their combat style relies heavily on random procs, with several layers of procs feeding into further (potential) procs. They possess a unique ability to rapidly dash around the battlefield.

Black Mages resemble the classical elemental mage, trading defense and mobility for unmatched spells damage, both against single targets and in area damage. Their unique mechanics revolve around balancing Astral Fire and Umbral Ice, consuming their MP with powerful but costly spells during Astral Fire, and then rapidly regenerating it during Umbral Ice, all the while weaving in deadly lightning magicks.

Summoners conjure one of three battle-pets into the fray to delivery a variety of attacks based on what they have summoned, cycling between fire, earth, and wind aspects throughout the fight. As a result, Summoners are surprisingly versatile and mobile for a Magic job. By attuning the elements, Summoners are ultimately able to manifest powerful echoes of the primals Bahamut and Phoenix to devastate their foes. Summoner, like Red Mage, is also one of the few DPS jobs that can resurrect fallen allies in combat.

The Red Mage is a versatile class capable of using both magic and weapon skills effectively. The class focuses on building and balancing white and black mana by casting magic, then expending them on their melee rapier skills to deal a finishing blow. In addition to dealing damage, Red Mages can draw upon strong healing magic and even raise fallen party members, as well as augmenting the damage of their allies for a short period of time. The combat style of Red Mages revolves around a unique pattern of casting a quick spell followed by a powerful spell made instant-cast due to their Dualcast trait.

Blue Mages learn skills by copying the abilities of their defeated enemies. They have access to a wide variety of spells, which make them more and more versatile and powerful as they learn. However, their status as a Limited Job restricts their access to content.