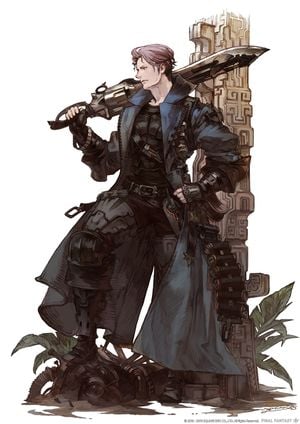 The Hrothgar of northern Ilsabard have passed the art of the gunblade from one generation to the next. The weapon itself combines a sword with a firing mechanism, emitting a range of magical effects by utilizing aetherically imbued cartridges. Originally employed by Queen Gunnhildr's personal guard, they were once known as "Gunnhildr's Blades" and differ greatly from the similarly named weapons used in the Garlean Empire.

Gunbreaker is a Tank job released in Shadowbringers (5.0) expansion.

The Gunbreaker's advancement is through Gods' Quiver Bow in Gridania (x11.5,y11.9). This job starts at level 60.

Gunbreaker is a job introduced in Shadowbringers, featuring the gunblade-wielding tank. It has a few requirements in order to be unlocked:

The gunbreaker is a disciple of war and wears armor "of Fending". They use gunblades as weapons. The following crafting classes can create items that are useful to the gunbreaker:

Upon learning the action Royal Guard, a symbol will appear on the screen indicating when it is in effect. Royal Guard increases enmity gained from using other actions.

Upon learning the trait Cartridge Charge, the symbol which indicates the use of Royal Guard will change to also display the Powder Gauge. 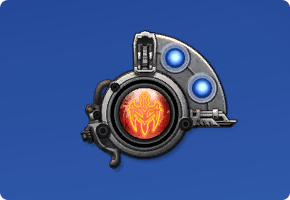 Cartridges are added to the Powder Gauge upon executing Rough Divide or the Solid Barrel combo. They can then be used to execute Burst Strike, Fated Circle, and the Wicked Talon combo. 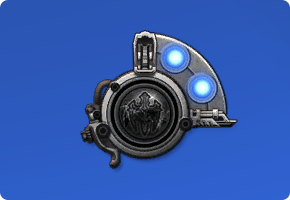 Do Not Sell My Personal Information
Retrieved from "https://ffxiv.consolegameswiki.com/mediawiki/index.php?title=Gunbreaker&oldid=342744"
Categories: