From Final Fantasy XIV A Realm Reborn Wiki
Jump to navigation Jump to search
Key elements of this article are incomplete. You can help the Final Fantasy XIV Wiki by expanding it.
Reason: Needs updating to Endwalker status

Job Gauge refers either to an user interface element that is used to track Job's specific resources or to resource itself. This includes, but is not limited, to:

Simple Job Gauges are simplified version of the original UI element. They contain same information as the original, but they do not have unnecessary graphical components, like background images or overwhelming animations. Simplified Job Gauges of different Jobs often look very similar if they work on similar basis. For example, simplified version of White Mage's lilies and blood lilies is nearly identical to Sage's Addersgall and Addersting, while their original version are easily distinguishable because of their very distinct graphical design. 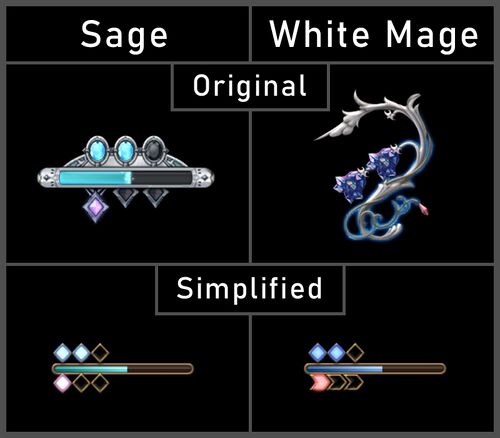 You can switch between the normal and simple versions of the Job Gauge display through the individual HUD layout options. 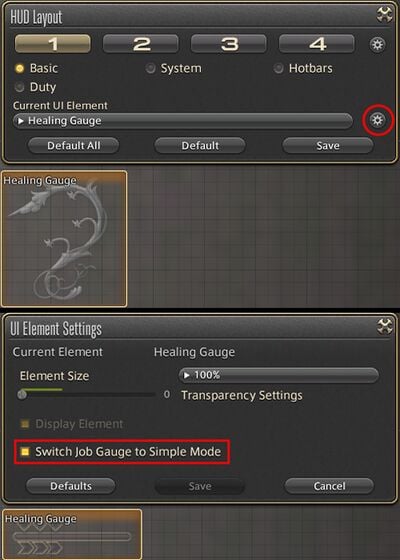 You can also switch between the two versions using the following text command:

If there are more Job Gauges available, assign a number to switch the specific Job Gauge display: 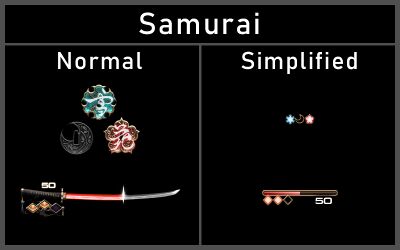 For Samurai, Job Gauge 1 is the Kenki gauge, and 2 is the Sen gauge.

If Job has multiple UI elements, you can mix and match them however you want. You can use simplified Kenki gauge while simultaneously use normal Sen gauge or any other combination.

Settings for both styles of Job Gauges are saved on the HUD layouts 1 through 4 individually, so you can switch between all sorts of modes as you like.

All Tanks have gauges that change their design to reflect whether they have their respective tank stance active.