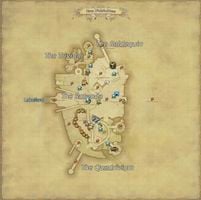 A bustling city that developed around the Crystal Tower in the years following its sudden appearance in Lakeland. It serves as a safe haven for people of all races and creeds as they join hands in the struggle against the merciless sin eaters.

The Crystarium is the Major City introduced in Shadowbringers (5.0), FFXIV's third expansion.