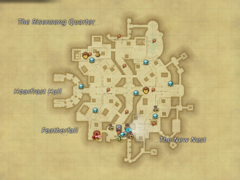 Map of The Firmament

The Firmament is a location in Final Fantasy XIV, located in Coerthas. The area was a residential ward of Ishgard that had been destroyed by the Dravanian Horde in the final days of the Dragonsong War.

The Firmament is a zone in Coerthas.

The Firmament is a section of Ishgard and the target of the Ishgardian Restoration. It is an instanced area that features a summoning bell, skybuilders' board, traders, and a shop. You cannot enter The Firmament on a server other than your home one.

As with Revenant's Toll, Idyllshire, and The Doman Enclave before it, The Firmament underwent changes throughout the patch 5.x series, beginning in patch 5.11. These updates tracked the progress in the phases of the Ishgardian Restoration. The Firmament was completed with the release of patch 5.5, and the new Residential District Empyreum is the result. See the Images section for construction progress.

Though Ishgard was not built in a day, her people are not wont to deny helping hands that might hasten their efforts. Be it the gathering of raw materials or the fashioning of supplies, one and all are welcome to help lay the cornerstone of a new Ishgard.

The reconstruction of the Firmament demands a large amount of materials specific to the project. Disciples of the Land are tasked with gathering these materials, which are used by Disciples of the Hand to craft the necessary supplies.

Upon unlocking Ishgardian Restoration, Disciples of the Hand or the Land of level 20 or above may speak with Potkin in the Firmament (X:12.2 Y14.6) to have project-specific crafting recipes and gathering points added to their logs.

The united efforts of Eorzea's volunteer gatherer's and crafters eventually lead to the rebuilding of the Mendicant's Court, allowing the Skybuilders to focus their reconstruction efforts on other areas of Ishgard. Players looking to offer their skills can speak with Augebert in the Firmament to proceed with the restoration storyline, opening up new crafting and construction options, including more Concerted Works, which can be monitored via the Skybuilder's Board (X:11.4, Y:14.1).

From here on, players will require completely different materials compared to those used during the previous phase, though you can still hand in older materials for a slightly decreased reward if desired.

By handing in special materials or crafted items during the new restoration project, players will also earn a Skybuilders' Ranking. To check your ranking, pay a visit to Ludovraint (X:10.6, Y:14.6) at the Firmament. 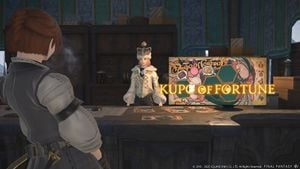 Disciples of the Hand (crafters) can now partake in the new mini-game Kupo of Fortune - a scratch card which is usable after earning five vouchers. Said vouchers are acquired by handing in specific items to Potkin (X:12.2, Y:14.6) in the Firmament.

Once the five vouchers have been acquired, and the scratch card has been brought to Lizbeth (X:12.2, Y:14.6) in the Firmament, players can select one of three panels from the right side of the scratch card for a chance of receiving one of the listed rewards (1st, 2nd, 3rd, 4th and 5th). Alternatively, players can select the single left panel for a chance at receiving a reward listed in 2nd, 3rd or 4th place. In short, the left panel will never provide the player with the 1st or 5th prize. Only a single panel can be selected per scratch card, so choose wisely!

Speaking to Potkin will also unlock project-specific recipes and add them to your crafting log. 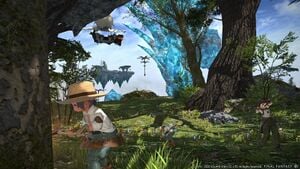 The Diadem has undergone a mechanical makeover specifically aimed at Disciples of the Land (gatherers). Players looking to acquire materials used in Ishgardian Restoration recipes can now head to the Diadem at their leisure and utilize any Disciple of the Land (Miner, Botanist or Fisher), provided they are level 10 or above. Creatures encountered at the Diadem will now remain in a passive state, giving gatherer's the freedom to traverse the Diadem and gather resources at their leisure without the threat of being attacked. However, thanks to the new Aetheromatic Auger (which is essentially a limit-break for gatherers), players can utilize a specialized rocket-launcher to obliterate a creature in return for a hefty sum of materials. The Aetheromatic Auger gauge is filled by successfully gathering items as a Miner or Botanist. 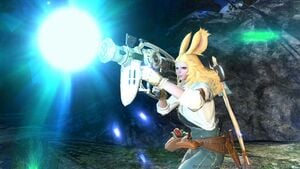 Despite the Diadem being centric to Ishgard Restoration material gathering, it will still provide Disciples of the Land with level-adjusted experience and a chance of rare and valuable materials, making it a great option regardless of the gatherer's level. It is also worth noting that some materials can only be gathered during specific weather conditions within the Diadem (

Umbral Duststorm). Also, materials are somewhat randomized, meaning that you will not get the same resources by using the same gathering node repeatedly or by remaining in a particular area.

Once your foray into the Diadem is complete, players can bring the gathered materials to Flotpassant (X:10.8, Y:14.0) in the Firmament for inspection. After doing so, players are rewarded with

Skybuilders' Scrips, and the materials can then be used for Ishgard Restoration crafting recipes, or even be sold via the Market Board.

With Francel de Haillenarte leading the charge, the reconstruction of the Firmament surges to ever-loftier heights. As many and more take up residence in the New Nest, the young lord would realize his latest vision─a bustling new commercial district befitting Ishgard's new age of free trade and enlightenment. Artisans one and all, take up your tools and answer the call!

To coincide with the updates to the Ishgardian Restoration, new supplies can now be crafted and submitted. In accordance with this update, the following additions and adjustments have been made to the submission of supplies from the previous chapter:

With the residences of the New Nest providing homes for countless Ishgardians and the markets of Featherfall ever flourishing, the Firmament is evolving day by day into the living, breathing heart of the post-war Holy See. So it is that Lord Francel de Haillenarte turns his eyes to the fourth phase of the restoration effort, which will see the construction of a cultural district where nobleman and commoner, man and dragon alike might further enrich their lives through aesthetic pursuits.

To coincide with the updates to the Ishgardian Restoration, new materials can now be crafted and submitted. In accordance with this update, the following additions and adjustments have been made to the submission of materials from the previous chapter:

As the final phase, the items and recipes from Phase 4 are permanent. While the reconstruction and rankings are finished, players can still submit materials for

Skybuilders' Scrips. Experience is capped to

To celebrate the completion of the Ishgardian Restoration, Fêtes were released in patch 5.5.