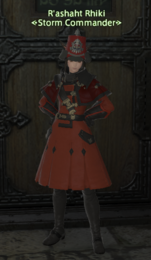 Born in Limsa Lominsa, Commander Rhiki left her parent's home before her twentieth nameday to seek her fortune as an adventurer. Though small of stature, R'ashaht is possessed of an agility and inborn strength, and she quickly became a Marauder known for her tendencies toward extreme savagery in battle. She was one of the first to swear fealty to the Maelstrom after it was established, and her accomplishments as an adventurer won her the command of the Foreign Levy at the tender age of twenty-two. R'ashaht took to the field of Carteneau as well, where she won honor by slaying an Imperial plius prior in single combat. R'ashat savors meat even more than her fish-loving Seeker of the Sun brethren, and has reputedly eaten the flesh of countless different beasts from oliphant to snurble in her twenty-seven years.