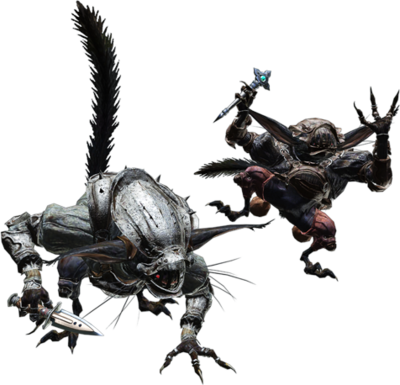 These subterranean beastmen dwell in northern Vylbrand, where they perforate the rocky bowels of O'Ghomoro with an ever-expanding warren of shafts and tunnels. After long years of conflict, the kobolds forged a peace treaty with the nearby city-state of Limsa Lominsa, but recent disagreements over the acquisition of mineral resources have sparked a resurgence of hostilities. On The First, they are known as the Mord.

Short and squat with their heads encased in metal helms, kobolds are commonly described as "armored moles". Despite this comparison, onlookers are often taken aback when the predominantly bipedal creatures skitter along the ground on all fours, their long, sharp clase affording them secure purchase on all manner of surfaces. As a race that spends the majority of its time underground, kobold eyesight is predictably poor-a disadvantage that is offset by incredibly keen hearing as well as the presence of tactile hair that allows the beastmen to sense subtle changes in air pressure.

Kobolds favor the earthy taste of grubs and larvae, as well as other invertebrates that burrow through the ground. White earthworms are considered a particular delicacy, and these treasured discoveries commonly find their way into the bowls of the higher-ranked digs. Raw and wriggling is the preferred method of consumption, though some choose to grind together ingredients and roll the resulting mixture into bite-sized balls.

Acting as the mouthpiece for the Great Father Titan, the patriarch of the 1st Order Dig is the guiding voice for the entire race of kobolds. The 1st Order itself contains not a single pickman, its ranks filled instead by a multitude of priests responsible for governing the various facets of the ruling theocracy.

Kobold society is structured around the existence of ranked groups known as "digs". The 1st Order Dig stands at the pinnacle of a rigid hierarchy, with each successive rung on the social ladder wielding authority over the lesser-ranked digs beneath it. All digs have an associated role: the highest rungs consist of bureaucrats and priests, responsible for the governance of state and faith; the middle rungs consist of metallurgists and alchemists, as well as mining operation surveyors; the bottom rungs are occupied by manual laborers, such as pickmen and industrial workers, with the overall trend appearing to show that the lower a dig's rank, the less cerebral its task is likely to be. Kobold young are raised as a group by a foster dig. When they come of age, they are then assigned to live and work with whichever dig in the hierarchy best suits their individual capabilities. Depending on the quality of their work, kobolds might also move up or down the social ladder, potentially belonging to multiple digs over the course of their lifetimes.

The names of kobolds consist of extremely short, single-syllable sounds, with the clan name preceding the first name. "Zu Ga", for example, would refer to "Ga" of the "Zu clan. The simplicity of this system results in many individuals sharing the same moniker-a matter compounded by the race's tendency to birth large litters of young. Whilst this would lead to confusion in most societies, the issue of identical names is rendered largely unimportant by the moleman's fixation upon rank and occupation. For instance, rather than simply stating a birth name, a kobold might be introduced as "3rd Order Patriarch Zu Ga", the additional titles distinctly identifying him as the highest ranking male priest of the 3rd Order Dig.

Kobolds venerate metal ores as a gift of Great Father Titan, and the race has made significant advances in metallurgy in an attempt to divine the will of their earthen deity. The creation of cobalt steel is one such discovery made by the kobolds in the name of this spiritual pursuit.

Research into the alchemical arts is conducted to support and enhance the kobolds' mastery of metallurgy. As a part of this practice, the beastmen's experiments to imbue ore and metal with the spark of life have led to the development of Coblyn and Bomb cultivation, as well as advances in golem manufacturing.