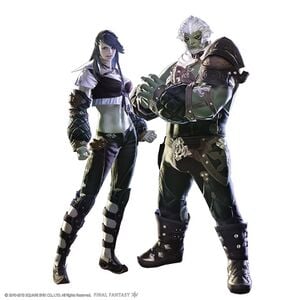 The Sea Wolves were once feared as brutal pirates of the north seas.

The Sea Wolves (ゼーヴォルフ族, "Zē Vorufu Zoku," meaning "Sea Wolf Group") were once feared as brutal pirates of the north seas. Now, however, they are one of the principal races of Limsa Lominsa, most often seen employed as sailors or seamen. In keeping with the old ways, the Sea Wolves bear names taken from the ancient Roegadyn language.[1]

Like all Roegadyn, the Sea Wolf clan hails from the bleak isles of the Northern Empty. Long ago, no vessel or coastal village was safe from their maritime brand of brutality. The mere mention of the clan was enough to strike fear into the hearts of any who drew their livelihood from the sea. While they still maintain a strong presence in their ancestral home on and around Aerslaent ("First Land" in the old tongue), subsisting as fishermen and women, a not-insignificant number left the homeland seven centuries ago, eventually settling in Vylbrand.[2][3]

There, they established the maritime city-state of Limsa Lominsa, which prospered and took its place as one of Eorzea's six great city-states.[2] It was not until the large-scale deployment of Limsa Lominsa's armada that the Sea Wovles' appetite for piracy diminished. Now it is not uncommon to see them employed as sailors or naval mercenaries on all manner of vessels.[3]

Giants among Eorzea's races, Roegadyn males average some eighty-four to ninety ilms, while even females reach an imposing seventy-five to eighty-seven ilms. Their bodies—arms, legs, even the neck—are thick with muscle and sinew, and minstrels often liken their limbs to mighty tree trunks.[2]

Roegadyn hair is thick and hard, with some individuals showing a natural wave. They take pride in their locks, and have developed a tradition of unique braids and weaves.[2]

They are typically open-minded, and blessed with a healthy sense of humor and booming laughter, which can be heard echoing around the alehouses of most ports.[4] They are also known for their remarkable gait and girth, and quick tempers.[5]

True to their seafaring roots, many Sea Wovles have made their mark as pirates, sailors, and fishermen.[2]

Unsurprisingly, Sea Wolves favor fish and other fruits of the sea, prepared with simple and unpretentious seasonings. They make ample use of salt, which has the added benefit of serving as a preservative on long ocean voyages, and are known for a wide variety of cured foods.[2]

Sea Wolves are noted connoisseurs of ale and wine, which they prefer to the more easily perishable water, and many have made a name for themselves as brewers of potent potables.[2]

The majority of the realm's Roegadyn belong to the Sea Wolf clan, in contrast to the relatively small number of Hellsguard.[6] They're most prominently found in Limsa Lominsa, where they account for approximately forty percent of its total population.[7]

North of Eorzea, in the Northern Empty, they're still found in great numbers in and around their native homeland of Aerslaent, but are also found on Old Sharlayan and its surrounding islands.[2] They were also found in the Sharlayan colony in the Dravanian hinterlands prior to the scholars' exodus.[8]

A population of Sea Wolf-like Roegadyn also dwell in Ilsabard, such as Biggs of the Garlond Ironworks.[9]

Though Sea Wolf names can be mystifying at a glance to the layman observer, they follow clear patterns rooted in the old Roegadyn tongue.[2]

Given names are compounds of two words, the first an adjective or a verb, and the second a noun. In the case of females, the second word is almost invariably chosen from among the traditional set of Swys (Sister), Thota (Daughter), Wyda (Willow), Geim (Jewel), Wyb (Woman), Rael (Doe), Lona (Gatherer), and Bryda (Bride).[2]