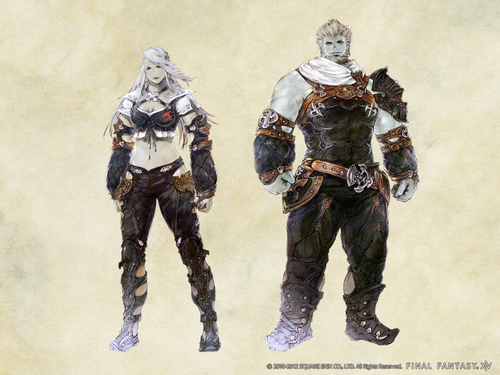 The Roegadyn are the largest of Eorzea's races.

Massive and heavily muscled, the Roegadyn (ルガディン, "Rugadin") are known for their brawny builds and piercing eyes and are the largest and most rugged of Eorzea's races.[1] They are descended from a maritime people that roamed northern seas, though many of their ancestors came to dwell in Eorzea.[2] Though often considered a barbaric and fiercely competitive race, they are also known for their honor, compassion, and loyalty. The histories are filled with tales of Roegadyn warriors and their courageous deeds.[3]

Roegadyn are said to be possessed of near-endless stamina, which may account for the impressive resilience shown by Roegadyn such as Gosetsu Daito.[4]

This race is known as the Galdjent on the First and, prior to the Flood of Light, made up a large part of the population of the Kingdom of Voeburt. Presently, they are found mostly in Lakeland, though some also live in Eulmore.

A maritime folk hailing from the bleak isles of the Northern Empty, the name "Roegadyn" means "people of the rain."[3] According to their mythologies, all life first began on the island of Nagyn, meaning "Origin" in their tongue. It is said to be the center of all life and civilization, and is considered sacred to them.[5]

Their ancestral homeland is Aerslaent, meaning "First Land," from which they established their reputation as brutal pirates. They're also known to have dwelled in Meracydia during the time of the Allagan Empire. At some point in time, a group of Roegadyn crossed over from Aerslaent and established a civilization in the mountains of Abalathia's Spine, where their Hellsguard descendants reside to this day. A different group of Sea Wolf Roegadyn came to Eorzea fleeing the rule of a despotic tyrant, and came ashore the isle of Vylbrand in 875 of the Sixth Astral Era. The city of Limsa Lominsa rose to prosperity from the crew of this lone vessel, the Galadion.[3][6]

While the Sea Wolves of Limsa Lominsa have a long and storied history as pirates, with many to hold the position of Admiral hailing from the clan (including current holder, Merlwyb Bloefhiswyn), the Hellsguard established themselves as mercenaries in Ul'dah and Ala Mhigo. They were once known for their unique brand of warrior, who wielded bestial fury on the battlefield. On Ilsabard, in 935 of the Sixth Astral Era, a separate group of Roegadyn mountain clans were employed by the republic of Garlemald to fend off invasions by Hyuran nomads. They ultimately withdrew from the capital a century later after the Garleans refused to compensate them for their service.[6] 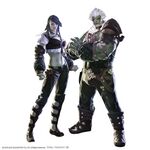 The Sea Wolves typically dwell in Limsa Lominsa as fishermen, sailors, and pirates. 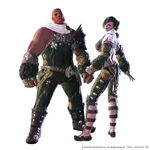 The Hellsguard dwell in the mountains of Abalathia's Spine, but are commonly seen as mercenaries in Ul'dah.

The Roegadyn of Eorzea are roughly grouped into two clans: the Sea Wolves who descend from the seafaring people of the north, and the mountain-dwelling Hellsguard. Of the two clans, the Sea Wolves are the more populous. Those belonging to neither clan can be found elsewhere in the Three Great Continents. In Ilsabard, a group of Roegadyn are known to dwell in the mountains. These Ilsabardian Roegadyn may physically resemble either Sea Wolves or Hellsguard. Many of them currently serve as part of the Garlean Empire, where they can be seen wreaking havoc on the battlefield for the imperial army, having been assimilated under the Garlean yoke.[3] Still another clan of Roegadyn resembling the Hellsguard is a common sight in the Far East, where they make up a significant population of both Doma and Hingashi.[7] During the time of the Allagan Empire, they also dwelled in Meracydia.[8]

Whether on the angry seas of the Northern Empty or the peaks of Abalathia's Spine, the Roegadyn have historically lived in rugged, inhospitable climes. Their culture values strength and willpower, both among their own kind and outsiders. This isn't limited to physical strength—even a Lalafell can earn a Roegadyn's respect through a display of magical might or strength of will. Those who lack these qualities will find it difficult to hold a Roegadyn's attention without an exchange of coin. Accordingly, the Roegadyn are often seen vying with one another in feats of strength.[3]

The old Roegadyn tongue lives on in Aerslaent and the Abalathian hinterlands, such as the Farreach. The Roegadyn of Limsa Lominsa and those Hellsguard who dwell in Ala Mhigo or ply their trade as sellswords and adventurers in Ul'dah have learned the common tongue of the Hyur due to their frequent contact with the other races.[3]

Many Roegadyn words have been forgotten after generations of disuse, with only popular terms being passed down through names. Every so often, however, a word is rediscovered in an ancient tome and added to the list for further generations to use.[9]