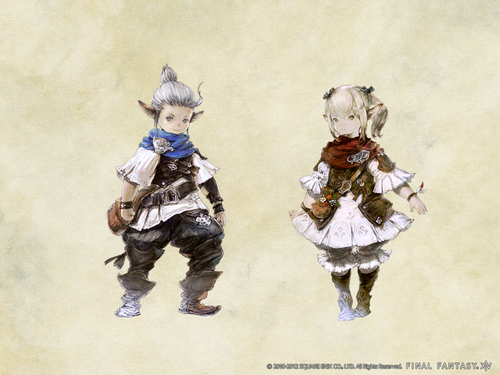 The Lalafell are the smallest of Eorzea's races.

Short, stocky, and rotund, the Lalafell (ララフェル, "Raraferu") are the smallest of Eorzea's races. They maintain a youthful, childlike appearance, even in old age, making their true age difficult for other races to ascertain.[1] Originally an agricultural people of the southern isles, they came to Eorzea following mercantile trade. They're welcoming of outsiders, and share prosperous relations with the other races.[2]

The nimble Lalafell make up for their lack of physical strength with swift reflexes and sharpness of mind.[1] They are one of the most well-established races in the realm and are found in great numbers in nearly every city.[3]

On the First, members of this race are called dwarves and inhabit the mountains of Kholusia. There are two known clans of dwarves, the Tholls who live in Tomra and the Goggs who live in Komra.

The Lalafell descend from an agrarian people native to the fertile islands of the south seas. Gradually, they migrated to Eorzea over the years in pursuit of trade.[1] They traveled across the boundless waters in catamaran-like ships unique to their civilization.[4]

Lalafellin history contains numerous examples of their aptitude for magic. As the art was created in their homelands, the Lalafell were likely key to the development of arcanima, a magic which uses arcane geometries to weave aether into specific magical effect. [5]

In the Fifth Astral Era, the Lalafell were instrumental in the foundation of the city-states of Nym on Vylbrand and Mhach in the lowlands of Yafaem.[1] The scholars of the Royal Nymian Marines were notable for their use of brilliant strategic maneuvering to heal and support their marauder comrades.[6] It was also a Lalafellin sorceress of Mhach named Shatotto who invented the art of black magic.

After the War of the Magi ended with the Sixth Umbral Calamity, the surviving Lalafell of Nym returned to their homelands in the southern seas, while the Lalafell of Mhach returned home to find a salt-drenched moor where once was their fertile valley.[1]

The Lalafellin sons and daughters of Mhach concealed themselves in the remote outlands during the early Sixth Astral Era, then ventured into Thanalan, eventually undergoing minor physiological changes and becoming the Dunesfolk. They founded the city-state of Belah'dia, which ultimately split into Sil'dih and Ul'dah, the latter of which prospers still today. Plainsfolk arrived in Eorzea as maritime traders from the south sea islands who came to Limsa Lominsa for profit. They settled on Vylbrand, and predominantly live as farmers to this day.[1]

Both the first and second Ul Dynasty are of Lalafellin lineage, and the majority of Ul'dahns are Dunesfolk.[7] While the Plainsfolk are comparatively small in number, they have made notable contributions to Limsa Lominsa, bringing the art of arcanima to the city-state.[4] The Lalafellin arcanist Ikuku Iku convinced Admiral Mealvaan to open Mealvaan's Gate in 1062 of the Sixth Astral Era, an organization of customs officials that also serves as the Arcanists' Guild in the modern day.[8]

In modern times, Lalafell rank among the wealthiest individuals in Eorzea, such as Lolorito Nanarito and Teledji Adeledji of the Syndicate. Their enterprising nature has led some—such as Highwind Skyways founder Tatanora—to introduce and develop technologies to heretofore unseen heights with such innovations as chocobo carriages lifted by ceruleum vapor-filled balloons, or popularizing commercial airship flight.[9] 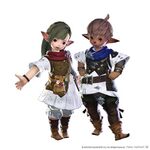 The Plainsfolk are commonly found on the island of Vylbrand. 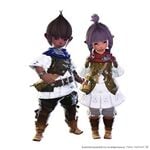 The Dunesfolk primarily dwell in the deserts of Thanalan.

Lalafell are primarily composed of two clans: the grassland-dwelling Plainsfolk and desert-dwelling Dunesfolk, with both tracing their roots to the south sea isles. Though slight differences in physical appearance have emerged over the many generations spent living apart—such as the thin membranes over the eyes of the Dunesfolk—the two clans have no resentment toward one another. In fact, inter-clan marriages are commonplace, with many Lalafell such as Teledji Adeledji possessing both Plainsfolk and Dunesfolk blood. Differences do appear in their names and customs, however.[1]

Though they place great importance on familial bonds, the Lalafell are not exclusionary. They maintain cordial relations with the other races, and have achieved much success as traders and merchants as a result. Their business-minded nature can lead them to be perceived as greedy and calculating, but few can truly dislike the Lalafell due to their inherently bright and jovial nature. Examples of Lalafell being persecuted by other races are extremely rare.[1]

The scarf is a common fixture of traditional Lalafellin garb, serving the practical function of allowing them to stand out above their modest stature by waving it as a signal flag on the high seas or vast deserts. They favor loose-fitting garments that conceal their naturally rotund builds.[1]

Lalafellin herbalism has been a large influence in the study of alchemy in Ul'dah.[10]

As a race of traders, the Lalafell quickly adopted the common tongue of the Hyur. The old Lalafellin tongue is still spoken today in the islands of the southern seas. Their language is ruled by rhyme, rhythm, and repetition, with additional alliteration liberally littering their lexicon. The old Lalafellin tongue is notably different from those of other races, containing only five distinct vowels: a, e, i, o, and u.[1] This appears to be something the language shares with ancient Hingan and Doman.

The names of Lalafell are made up of a given name and "courtesy name" bestowed upon reaching adulthood. The latter is not a family name, but unique to the individual. Their names originate in songs and poems in the old tongue.[1]