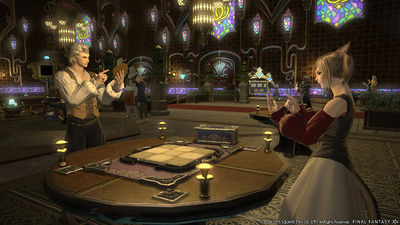 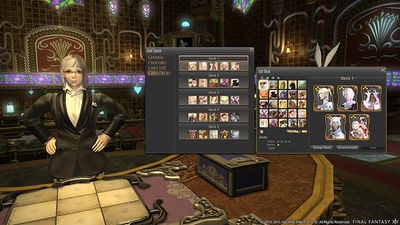 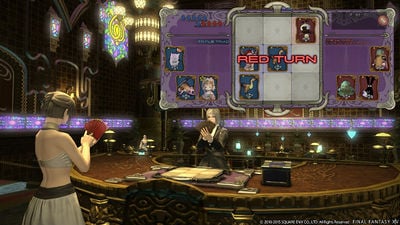 The Battlehall is an instanced area where players within the same data center can challenge each other to Triple Triad matches. It is accessible from any location via the Duty Finder.

After the initial launch of Triple Triad in patch 2.51, eighty cards were available. About half of those cards are obtainable by defeating Triple Triad NPCs. The other half are purchasable with Manderville Gold Saucer Points, rewarded from Triple Triad Tournaments, obtained randomly from card packs, and looted from dungeons, trials and other duties.

After obtaining a new card, you can permanently add it to your card list. If you gain a card that is already in your card list, you can sell the spare card for

MGP by talking to the Triple Triad NPC in the Gold Saucer (X:4, Y:7). Note that you cannot trade cards with other players or sell them for gil.

You can have as many rare or lower cards per deck as you like, but you may only have up to two epic or legendary cards, with only one legendary allowed per deck. (Be aware that NPC's Don't follow this particular rule, just the players.)

You can create five pre-made decks, with each deck containing five cards in total. You can build decks by going to the Gold Saucer Menu and selecting the Card Decks sub-menu.

Certain cards have an icon on the upper right corner that represents a specific faction – "Primal", "Beastmen", "Scion", or "Garlean". These faction cards come into play during specific rules.

Players can discover multiple NPCs throughout Eorzea that can be challenged to Triple Triad matches. To challenge an NPC to a match, you must first pay a small

MGP fee. If you are victorious, you are rewarded with

MGP and also have a chance to win cards from them, though bear in mind that different NPCs reward different cards and that you cannot acquire a card from a 'draw' or 'loss', only victories.

NPCs which the player has not beaten before, will have a Triple Triad marker

above the NPC's head with an exclamation mark.

NPCs which the player has beaten, but still have cards available that are not in the player's deck, will have a Triple Triad marker above the NPC's head with a star.

Players can also challenge other players to Triple Triad and even select the special rules that will be used for the match. When playing in this manner, no

MGP fee is incurred, though you still receive a small amount of

MGP regardless of whether you win or lose the match.

The first five matches of the day earn you additional

Players can only challenge other players in specific areas, such as:

Triple Triad is played on a three-by-three grid, totaling nine spaces, with each player utilizing a deck of 5 cards. Every card has a number on each side to represent the strength of that side. Once the match begins, a player is chosen at random to go first, then each player uses their turn to place a card on an empty space on the board.

During standard rules, if you place a card next to an opponent's card, and if the number facing the opponent's card is higher than their number, you take over the opponent's card. After all nine spaces on the board have been filled, the winner is the player who controls the most cards. Note that the unplaced 10th card is also counted.

Various rules alter the way the game is played.

For example, NPCs are affected by 'regional rules' which reset at 7 AM PST /10 AM EST every day, though there are certain NPCs that are immune to this. Regional rules are also applied when playing against other players. Also, each NPC has its own 'match rules'. When challenging another player, you can set your own match rules yourself. It's possible to have two match rules and two regional rules affect a PvP match at once.

While this rule is in play, all five cards in each deck are made visible to both players.

While this rule is in play, three random cards in each deck are made visible to both players.

A rule that alters how cards are captured. If the numbers of two or more cards are the same as the numbers on the adjacent sides of the card you place, you gain control of every matching card. For example, if your card has "3" on all sides and you place it between two cards that have a "3" facing your card, you capture both of those cards. Note that only one of the two or more matching cards needs to belong to your opponent for the 'Same' mechanic to take effect.

When "Sudden Death" is in effect, any match that ends in a draw will be restarted from turn one rather than end the match. Your deck for this new match will consist of the cards you had control over at the end of the previous game. Sudden Death will continue until one player wins or until five more consecutive draws take place, at which point the game will end in a tie.

A rule that alters how cards are captured. If the numbers of two or more cards have the same total when added to the numbers on the adjacent sides of the card you place, you gain control of every matching card. For example, if the card you place has "3" on top and "2" on the left, and your opponent's cards to the top and left have "4" and "5" respectively, you capture those two cards. This is because 3 + 4 = 5 + 2. Similar to the 'Same' rule, 'Plus' will take effect whenever the placed card touches two other cards, regardless of who controls them. They do not have to be two opposing cards. 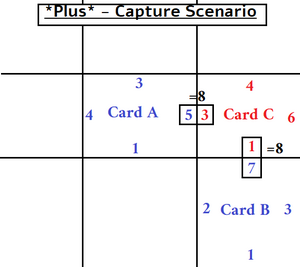 In this scenario, Card C, placed last, would lead to the capture of cards A and B.

While this rule is in play, your chosen deck will be replaced with five cards selected at random from your entire card list.

While this rule is in play, you are required to play each card in the order that it appears in your deck.

While this rule is in play, the only card you can play each turn is randomly selected from your deck.

While this rule is in play, the conditions for capturing cards are inverted, making smaller numbers more powerful than larger numbers. For example, a "1" will capture a "6".

During 'Ascension', if you place a faction card on the board – such as a "Primal" or "Scion" card – all cards of that faction will gain +1, including those held in your deck and your opponent's deck. Any card that increases to "11" or higher is treated as an "A" rank.

During 'Descension', if you place a faction card on the board – such as a "Garlean" or "Beastman" card – all cards of that faction decrease by 1, including those held in your deck and your opponent's deck. Any number that is decreased to "0" or less as a result of this rule will be treated as a "1".

While this rule is in play, one card from your deck is switched with one of your opponent's cards before the match begins. The cards to be swapped are chosen at random and are returned to their original owners at the end of the game.

When the "Roulette" rule is in effect, the advanced rules for the match will be chosen at random.

A Combo is only available during 'Same' and 'Plus' rules. If you capture cards as a result of Same or Plus mechanics, and if those captured cards lie adjacent to "weaker" cards (i.e. cards with smaller numbers on the neighboring sides), those cards will fall under your control as well. 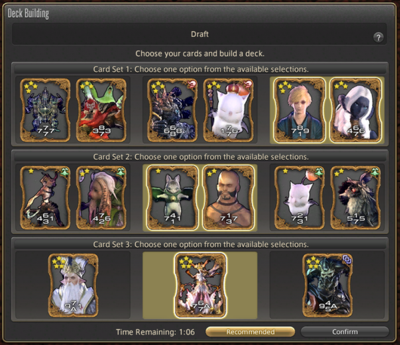 Draft is an advanced rule released in Patch 5.4 of Shadowbringers. When the Draft rule is in effect, participants will not have access to their individual decks and must instead play using cards provided by the Gold Saucer.

Three sets of randomly generated cards will be displayed before the match begins. Participants must choose one option from each set to build their deck, which will then be locked in for the duration of the competition. The Recommended button may be pressed instead to automatically choose the strongest cards available.

MGP rewards and some of the rarest cards in the game. However, Triple Triad tournaments only occur at specific dates and times.

Open tournaments and Invitational tournaments are released in Patch 5.4 of Shadowbringers. Allowing up to eight players and requiring no

MGP for admission, these tournaments consist of three matches, making for a quick and easy way to enjoy Triple Triad with friends (or bitter rivals).

After completing the quest

Sizing up your opponent 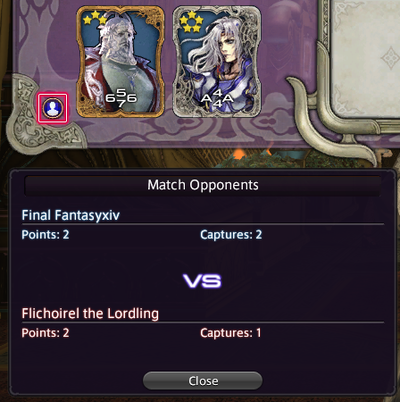 In the event a player logs out during a match, cards will be played automatically on their turn at the end of the 5 second grace period.

These tournaments are periodically held events employing the new "Draft" ruleset. Players will use a single deck and participate in three matches.

Speak with the Open tournament official in the Gold Saucer to register for the next available competition. The tournament will begin when 8 participants have been assembled or once the requisite amount of time has elapsed since the registration period began. If there are fewer than 8 participants available, NPCs will sit in for any missing players. Please note that you cannot be joined in a party when registering to compete.

MGP, Triple Triad Cards, and other prizes will be awarded at the end of a tournament, with final rankings and win rate determining the reward amount.

These tournaments follow the same basic structure as Open tournaments, with the main difference being that there are no rewards on offer. Participants may also register at any time as either a solo player or as a party. When registering as a party, the party leader can freely choose a tournament rule set.

Players can register to enter the Triple Triad Invitational Parlor and participate in these tournaments at any time via the Duty Finder. In the case that a player registers solo, or a party has less than 8 members, the missing numbers will be made up by Triple Triad regulars or Gold Saucer employees.

There are no rewards on offer for this tournament format.

Tournament participants can only play a set number of matches per tournament, with every match played counting toward their final scores. This score will increase for every match won, with more points being awarded for defeating higher-ranked opponents. Each tournament has a fixed set of special rules that tournament matches must follow. This does not apply to regional rules.

Players can view the standings for ongoing tournaments at any time by either speaking with the Tournament Recordkeeper at the Card Square in the Manderville Gold Saucer (X:4, Y:7) or examining the nearby Tournament Ranking Board. Scores will be locked the moment the tournament ends, and these numbers will determine the final rankings.

When two or more players share the same score at the end of a tournament, rank is then determined by the greatest number of wins. If wins are also equal, then the rank will be decided by the least number of matches played. Should match numbers also be equal, then the higher rank will go to the participant who first recorded a result on the tournament ranking board.