This affable former mercenary runs the Drowning Wench, a beer hall found in Limsa Lominsa. Foul-mouthed yet good-natured, Baderon's soft spot for helping out fledgling heroes has earned him the trust and respect of the adventuring community.

Baderon is a Hyur found in Limsa Lominsa Upper Decks. 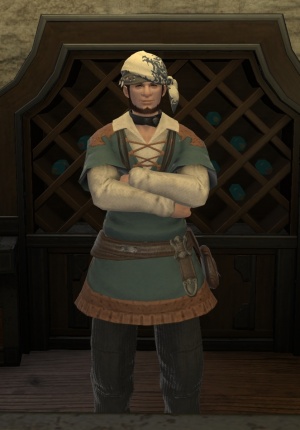 The proprietor of The Drowning Wench in Limsa Lominsa, Baderon is the only son of Lodewicus. However, the founder of the Adventurers' Guild seemingly cast a long shadow, and Baderon grew rebellious, leaving home when he was but a lad. He became a mercenary, and threw himself into pitched battle time and again. At some point, something must have changed, for the Midlander man quit the sellsword life to open a tavern, and there established a space for the Adventurers' Guild. Now a man of forty eight winters, he acts as something of a teacher, helping the younger generation find its feet. Baderon's nickname, "Tenfingers", is a mark of respect for his skill as a mercenary, for only a few of those who walk that path will leave it with all their digits whole.