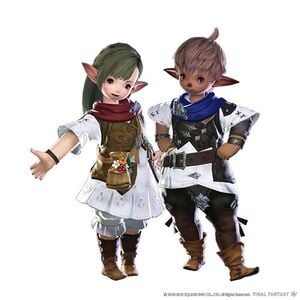 The Plainsfolk dwell in grassy plains.

From the flat landscapes of the south sea isles are where the grassland-dwelling Plainsfolk (プレーンフォーク族, "Purēnfōku Zoku," meaning "Plainfolk Group") Lalafell take their name.[1] They trace their history to the maritime traders who settled in Limsa Lominsa to deal in pillaged and plundered wares. In the years to follow, they were joined by their families, who would become pioneers of the greater La Noscea region.[1][2]

Though many live the life of farmers, it is not uncommon to see Plainsfolk residing in Limsa Lominsa.[3] Today, the Plainsfolk represent a significant part of the Lominsan people, and are known for their relaxed, comfortable lifestyle and carefree demeanor.[2] They are a clever and opportunistic people, and crafty with their words. The generally accepted view of Plainsfolk is that they are a vibrant lot, with a penchant for excessive conversation.[1]

Like all Lalafell, the Plainsfolk trace their ancestry to the south sea isles. On their island homelands, the Plainsfolk lived as farmers, residing in thatched-roof houses connected by subterranean tunnels modeled after ant colonies. Their gardening and horticultural skills knew no peer, and it was in this capacity that they shone as pioneers of new and unbroken lands. Making the most of their light, compact bodies, they traveled remarkable distances in simple-yet-sturdy canoes, developing their own unique seafaring and navigational methods, which they employ to great success as fishermen and maritime traders even today.[2]

Near the 500th year of the Fifth Astral Era, scores of Lalafellin sailors arrived on Vylbrand's shores in longboats woven of reeds. The mercantilists built a meager trade settlement upon the Bay of Nym on the southern part of the isle with hopes of establishing trade with the native kobold tribes. In time, this lonely outpost grew into the maritime city of Nym.[4]

Nym's population was not as robust as the other twelve city-states of its day, but they made up for it in commerce and made full use of their skills in seafaring. They formed the Nymian Royal Marines, a small but fearsome naval force placed in charge of the city's defenses. When the War of the Magi consumed Eorzea, the Royal Marines maintained Nymian independence by repelling wave after wave of voidsent sent by the Mhachi across the Rhotano Sea.[4]

However, when a group of Nymian sailors returned to their homeland with an amphora gifted to them by a tribe of Lalafells from a desert island they'd run aground on their last voyage, a plague began to take hold of the city-state. The amphora was part of a Mhachi plan to unleash Bitoso—a pestilence-carrying voidsent summoned to decimate the Nymian population. Those who contracted the Green Death transformed into tonberries, and were quarantined in the Wanderer's Palace. Ultimately, the Nymian government submerged the temple and its inhabitants.[4]

The War of the Magi ended as the realm realized that a Calamity was upon them. The Nymians, despite still reeling from the plague, ordered the construction of an expansive floating net of protective wards dubbed Operation Maelstrom. While this ambitious project commenced, few remaining Nymians untouched by the Green Death fled to the mountainous regions of outer La Noscea. While the Nymian Grand Company was able to turn back the largest of swells, subsequent waves pulverized their coastal city-state, leaving no homes to which the survivors might return.[4]

In the wake of the Sixth Umbral Calamity, the Nymian Lalafells employed their seafaring talents and returned home to the south sea isles.[2] As mantis sightings in Eorzea coincide with the time period in which Lalafellin settlers from the south arrived in Vylbrand, it has been concluded that the giant insectivorous vilekin (also found in abundance in the Lalafells' homelands) were unintentionally brought over by the Plainsfolk—eggsacs most likely attached to the reeds from which the clan wove its sea ships.[5]

Their descendants would later be drawn back to Vylbrand around the year 980 of the Sixth Astral Era, attracted by rumors of cheap wares after a market for plundered goods emerged in Limsa Lominsa.[6][7] As time passed, these traders were joined by their families—drawn to the similarity of La Noscea's grassy fields to those in their homeland—and pioneered settling the greater La Noscea region.[1][2]

In 1062, Admiral Mealvaan appointed a Plainsfolk arcanist from the south sea isles, Ikuku Iku, as an advisor in matters of governance. Ikuku was instrumental in establishing Mealvaan's Gate to inspect and tax maritime traffic.[6] Today, Mealvaan's Gate serves as the location of the Arcanists' Guild, where Ikuku's brethren continue to serve as assessors by tradition.[8]

Plainsfolk today are predominantly farmers, but some turned to shipping and fishery when skirmishes with the kobolds stalled further exploration of the island.[2] The Plainsfolk residing in Limsa Lominsa today commonly hold positions in the navy, or work in the fisheries.[3]

Averaging thirty-five ilms in height, the Lalafell are by far the smallest race in Eorzea with naturally rotund builds. What they lack in physical strength, they more than make up for in swiftness of reflexes and sharpness of mind. Underestimating a Lalafell has been a costly mistake for more than a few men. Hair of grassy and earthen colors is common among Plainsfolk, with dubious theories claiming that these hues evolved to camouflage them from the sight of the fearsome avian predators such as vultures and giant rocs that roam the skies above the south sea isles.[2]

Lalafell maintain a youthful countenance, even in advancing years, and their true age is often difficult to discern.[2] The long, pointy ears of the Plainsfolk are large and developed, extremely sensitive, and said to be able to detect the faintest scampering of the prairie's various fauna. It's thought that this trait was once necessary to locate food, as well as detect enemies in the wide grasslands. It is also believed that Plainsfolk males have a weakness for festivals and celebrations.[9][10]

The Plainsfolk have traditionally lived an agrarian lifestyle, both on Vylbrand and in the southern seas with peerless agriculture and horticulture. It has also been well-documented that arcanima—the school from which arcanists draw their craft—originated in the south sea isles and was brought to Vylbrand by Lalafellin immigrants to the realm.[11] Other races know the Plainsfolk for their relaxed, comfortable lifestyle. Some perceive them as greedy and calculating, though this is less common compared to their Dunesfolk cousins.[2]

Their traditional style of housing can be observed in Costa del Sol, which was developed using their culture's thatched-roof houses.[12] Historically, they've used catamaran-like ships made of woven reeds to travel from island to island, though this method is no longer used by the Plainsfolk of Vylbrand.[11] That said, the unique seafaring and navigational methods developed by their ancestors are still employed to great success by fishermen and maritime traders. As befitting their status as a race of traders, the Lalafell were among the first to adopt the common tongue of the Hyur. Nevertheless, it is said that the old Lalafellin tongue is still spoken today on their island homes to the south.[2]

As the Plainsfolk's ancestors were the architects of Nym, their culture is also tied to the scholars of the Nymian Royal Marines. This specialized support role utilized the arcanima of their native culture to take command of the battlefield and maximize the nation's marauders' effectiveness in combat. To answer the demands of this new position, they learned to bind and control faeries using their soul crystals. Initially intended to serve as heralds, the aetheric beings proved capable of much more and became familiars to assist in the realization of stratagems and split restorative duties. This allowed the mages to focus more fully on strategy and tactics, a practice which earned them the title of "scholar."[13]

Unlike many of the realm's other races, the two clans of Lalafell harbor no particular resentment for one another. Inter-clan marriages are commonplace, with many Lalafell today possessing both Plainsfolk and Dunesfolk blood—such as Mirage Trust chairman Teledji Adeledji.[2][14]

Lalafell are one of the most well-established races in the realm of Eorzea, and can be found in great numbers in nearly every city. The Plainsfolk clan is most plentiful on Vylbrand and account for approximately twenty percent of the total population of Limsa Lominsa.[7] Outside of the realm, they still maintain a large population on their ancestral homelands in the south sea isles.[2] Plainsfolk-like Lalafell such as Wedge are also known to inhabit Ilsabard.

Lalafellin names are made up of a given name and a "courtesy name" bestowed upon reaching adulthood. The latter is not a family name, but rather unique to the individual. Lalafellin names trace their origins to the old tongue, and are ruled by rhyme, rhythm, and repetition. Male Plainsfolk names, such as "Alka Zolka," feature an AB-CB rhyming scheme, while female names, such as "Mimomo Mimo," are ABB-AB.[2]

These phonemes are usually limited to one or two syllables each. As these rules are different from those of the Dunesfolk, one can discern a Lalafell's clan and gender by simply looking at a name. There are rare cases when the B phoneme will seemingly have one syllable such as Zozonan or Nanalai. The "n" and "i" here are, in fact, the remnants of sounds that were once paired with a Lalafellin vowel that, over time, has disappeared from speech, and therefore become silent in names.[15]

As a whole, Lalafellin names are notably different in both spelling and pronunciation from those of other races, owing in part to the old Lalafellin tongue—used by the clans before they arrived in Eorzea—containing only five distinct vowels: a ("ah" as in "arm"), e ("eh" as in "bet"), i ("ee" as in "beet"), o ("oh" as in "home"), and u ("ooh" as in "dude").[2][15] Perhaps coincidentally, the language shares this trait with the ancient Far Eastern tongues of Doma and Hingashi, though those languages do not distinguish the letter "r" from the letter "l" and do not use the latter. 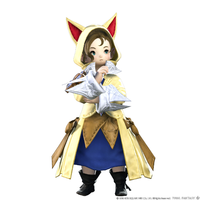