Having conquered the burning landscape of Pyros, the expedition pushes onward to a region ruled by water: Hydatos. Here rises the headquarters of the Students of Baldesion, their final destination, but aetheric anomalies and fearsome creatures conspire to ensure that entry will not be easily gained. Yet gain entry to the tower they must if they are to head off the threat of the primal Eureka and lay the isle's mysteries to rest once and for all...

The Forbidden Land, Eureka Hydatos is a level 70 adventuring foray introduced in patch 4.55 with Stormblood.

It is the final area in The Forbidden Land. 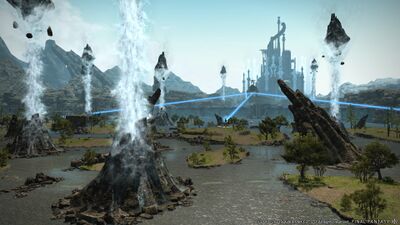 Complete the quest And We Shall Call It Hydatos

One additional logogram and six new logos actions have been added. 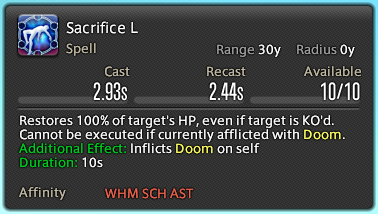 After fully augmenting a Eureka weapon in Pyros and proceeding to a certain point in the Hydatos story, you will be able to augment your Eureka weapon further by speaking to Gerolt in Hydatos (X:21.4 Y:13.6).

An upgrade to Hydatos weapons. Weapons will have a new model and swirling particle effects. This step grants the weapon's final appearance and maxes out its stats, excluding elemental stats that are effective in Eureka zones only. If you only care about the earning the glamour and don't care about the elemental stats, you can stop after completing this step.

An upgrade to Eureka weapons. Stats and appearances are identical to Eureka weapons, except that they have extra Elemental Bonus stats that increase the weapons' power in Eureka zones only (including

Eureka armor augmentation will be unlocked once 56 unique logos actions are registered in your log.

Hydatos is also home to many a happy bunny. As a reward for saving them from imminent peril, happy bunnies will help you find hidden treasure on the island. 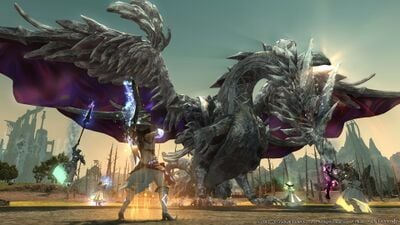 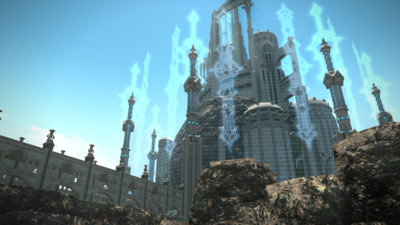 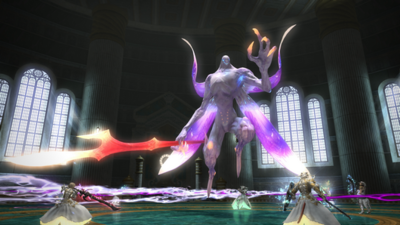 The entry requirements for this duty are extremely strict, as savage bosses, devious traps, and an effect that prevents resurrection by certain means all await you within.

Those who hope to challenge this dungeon should read all available information thoroughly, and properly understand the risks before entering.

Aetherial nodes throughout Hydatos can provide access to the Baldesion Arsenal.

To make use of these nodes, your elemental level must be 60. You will also require a particular status enhancement.

There are two varieties of aetherial nodes: unstable blue nodes, and stable red nodes. Regardless of type, each node will disappear once accessed by a player, or if a certain amount of time passes without its being accessed.

The appearance of aetherial nodes is related to the atmospheric condition umbral turbulence.

Stable nodes do not require the use of Aetheric Stabilizers. However, each will only appear after a certain amount of time has passed following the disappearance of an unstable node.

The detrimental status effect "Resurrection Restricted" will be applied upon entering the Baldesion Arsenal. While this status is active, you can only be resurrected via limit break or a specific logos action. For this reason, be aware that KO carries a heavy risk.

If you use choose the Return function from the menu, or accept the prompt to return to the starting point while KO'd in the Baldesion Arsenal, you will be removed from the dungeon and transported to the expedition camp in Eureka Hydatos. To re-enter the dungeon, you will once again need to access an aetherial node, so think carefully before returning.

Those who defeat the bosses within and clear the entirety of the Baldesion Arsenal will be richly rewarded. To do so will be no mean feat, however─you must communicate well with your fellow adventurers if any of you are to reach the prize.