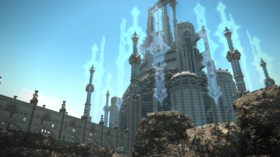 The Baldesion Arsenal is a level 70 duty introduced in patch 4.55 with Stormblood.

The Baldesion Arsenal is a challenging open-dungeon that can only be accessed by Disciples of War or Disciples of Magic who have completed the Eureka storyline and also sport an elemental level of 60.

Assuming you are up to date with the storyline and meet the above requirements, access to the dungeon is gained via portals around the map that can only be spawned by completing the Boss FATE:

I Don't Want to Believe. The FATE usually spawns during Umbral Turbulence weather and will provide a special notification to participants when it appears. The FATE can also be somewhat coaxed into spawning by repeatedly slaying Sprites that inhabit Sprite Island, though it may not spawn at all if there are players already inside The Baldesion Arsenal.

Once the FATE boss (Ovni) has been defeated, a large number of blue portals will appear throughout the zone, and all players who sufficiently participated in the FATE will be granted a special 10-minute buff (Aetherically Primed) that allows them to enter one of the blue portals immediately. If you wish to enter the dungeon but did not acquire the buff, don't worry - the portals will eventually turn red after 5 minutes of real-time, meaning that they can now be entered even without the buff. Keep in mind that portals can also be spawned by players inside the duty once they accomplish certain feats on the way to the third boss, Absolute Virtue, which will allow additional players to join the fray.

Prepare for the Worst

Before delving into the depths of the dungeon, be sure to rally your allies, stock up on appropriate Logos Actions and form a versatile team. As an open duty, parties are not role-restricted (i.e., you don't have to enter with 2 tanks, 2 healers and 4 damage-dealers), though it may be wise to form something similar for the upcoming challenges. Considering that various mechanics and raid-wide AoE's can easily slay an unprepared player and end their run, make sure you (and/or fellow teammates) are sporting enough defensive and utility-based actions. Your run will end if you accept a KO-Return, or leave the instance for any reason (such as teleporting out or losing your connection).

Unlike standard content, players cannot be raised by normal means. Should you fall for any reason, you can only be raised by someone carrying the

Sacrifice L (Logos Action) or a Healer-based Limit Break 3. As a result, all players (regardless of role) should be extra cautious whilst traveling through the dungeon. Not only will you face packs of dangerous enemies, but you will also encounter devastating Trap Tiles that can only be spotted by players with

Perception L (Logos Action). If you are not one of them, make sure to stay behind someone who does.

There are four boss encounters in total within The Baldesion Arsenal, all hiding behind a gauntlet full of dangers, including trash packs that can hit surprisingly hard, not to mention the trap-laden rooms and corridors. Seeing as being KO'd can end your run prematurely, it is wise to give tanks a little extra time to generate enmity before you attack, and never stray far from your designated Perception scouts even if you think the area is safe.

Lastly, the duty timer will start at 25 minutes, yet you will gain additional time whenever you successfully conquer a major room or boss encounter. Furthermore, this will also extend your Hydatos (outside) duty time, not just your in-dungeon time.

Before taking on your first boss encounter, participants will need to split up and head down one of two routes - one leading to Art, the Black Spear and the other to Owain, the White Spear. However, should a group reduce a boss to 1 HP, it will remain alive for as long as the other has more than 1 HP.

Below is a list of notable mechanics from both bosses:

The second boss, Raiden, awaits you within a circular arena atop his faithful steed. After some introductory mechanics, he will erect an electrified death-wall around the arena, so make sure you are not standing too close to the outer wall beforehand.

If Raiden is still active at this point, he will begin to execute previously used mechanics with some degree of overlap or variation - but nothing you haven't witnessed already.

The third boss, Absolute Virtue, has a super-buff that can only be removed by clearing out a total of six side-rooms, each of which contains a switch that will lock the door and spawn a wave of enemies.

The group should split up into six teams and head inside their chosen rooms. Much like the rest of the dungeon, players should also make an effort to scout for traps using Perception beforehand, just-in-case. Assuming all buttons are pressed, a new FATE (The Baldesion Arsenal: Expedition Support) will appear at the south side of Hydatos. If successfully cleared, Absolute Virtue will be respawned without the super-buff and an additional 8 portals will be created, allowing more players to join the fray.

Once you've regrouped, it's time to take on the boss - which is certainly more challenging than the previous two encounters.

Now that you have witnessed all of Absolute Virtue's mechanics, they will cycle with various overlap. However, if the boss isn't defeated in time, it will eventually Enrage, gaining a major damage boost.

Proto Ozma is a variation of the Final Fantasy IX super-boss who previously made an alternate appearance in The Weeping City of Mhach. Players who are familiar with the Weeping City version are in for a similar experience, yet infinitely more varied and deadly by comparison. Just like in the Weeping City, each group will need to position themselves on one of three platforms located around Ozma and be ready to react to its ever-shifting forms. Weeping City Ozma used to treat players with a quick trip to an alternate dimension mid-encounter, whereas Proto Ozma can eject you from the duty altogether if you fail to position properly during Black Hole.

However, unlike the previous version of Ozma, the Proto version has an additional Spiked form, bringing in new mechanics, not to mention the fact that Ozmashades (mini-clones of the boss) will be executing their own version of the bosses mechanics nearby for the entirety of the battle. All players will need to keep a close eye on which form Ozma (and the Ozmashades) are transforming into, then react accordingly to each, one after the other. Lastly, Ozma's auto-attacks will also differ depending on its current form, each one being its own mini-mechanic.

Ozma always begins in Sphere form and its first Formshift will always be into Spike form, then become entirely random from then on. Below is a list of all its forms and form shift mechanics.

Sphere - Form Shift: Whenever Ozma (or an Ozmashade) transforms back into a Sphere once again, it is usually to cast Black Hole - a mechanic that sucks up unfortunate victims and spits them out of the dungeon, ending their run. Before Black Hole goes off, 6 panels will light up around the arena. Each panel requires at least one player to stand in it to prevent all players from being sucked in. If there is at least one player on all panels, any player who is not standing on a panel by the time Black Hole goes off will be unceremoniously chucked out of the dungeon.

Sphere - Auto-Attack: Whenever Ozma is in Sphere form, the player with the highest enmity (from each group) will be frequently peppered with regular single-target auto-attacks with no additional components. However, Ozma may change targets and blast a squishy random if there are no targets present on the main platform.

Spiked - Form Shift: Whenever Ozma (or an Ozmashade) transforms into a Spiked form, a large point-blank AoE will soon be emitted from its current location. All players will need to move away from the boss (or shade) to avoid damage.

Spiked - Auto-Attack: Whenever Ozma is in Spike form, random players from each group/platform will be bombarded with shared-damage mini-AoEs. For best results, each group should remain as closely stacked as possible for the entire duration of Ozma's spiked form in order to reduce the overall damage intake.

Triangle - Form Shift: Whenever Ozma (or an Ozmashade) transform into a Triangle, it will eventually shoot a large column AoE down the platform. All players should be ready to move left or right onto the smaller walkways (off their main platform) to avoid the blast, then run back to their platform.

Triangle - Auto-Attack: Whenever Ozma is in Triangle form, Ozma's auto-attacks will hit a random faraway player with a Bleed DoT, shot in the form of a mini-AoE. If all players are in melee range or clustered too close together, the results can get very nasty seeing as the AoE component can overlap bleeds and damage onto multiple people. As such, it is wise to have one player (per platform) stand a little further away from Ozma than the rest so that the bleed-attack can be baited and easily cleansed.

Cube - Form Shift: Whenever Ozma (or an Ozmashade) transforms into a Cube, it will eventually emit a very tight donut AoE. Players will need to make sure that they move in very close to Ozma (or the Ozmashade) to avoid being blasted. Also, floating orbs will also be spawned that will slowly begin rotating around the small walkways. Off-tanks (with mitigation CD's) should make a point of popping these away from the rest of the raid before they float over to the main platforms.

Cube - Auto-Attack: Whenever Ozma is in Cube form, it will emit a straight-line AoE through the highest enmity member of each group - typically all three tanks. As a result, all other players should remain to the side of their respective tank for the duration of cube form to avoid being clipped by the frequent straight-line AoE's.

REMEMBER: Both the Ozmashades and Ozma itself will be executing shape-related mechanics one after the other throughout the encounter -- Ozmashades first, then Ozma itself. For example, if you notice an Ozmashade behind you that is transforming into a Cube, and Ozma itself begins to transform into a Triangle, this means that all members of the group should first run to the Ozmashade to avoid the (Cube) Donut AoE, then immediately run off the platform to avoid Ozma's (Triangle) straight-line AoE. There are numerous combos, as well as other mechanics that can overlap them, so just keep in mind that you will typically react to the Ozmashade version first, then the boss itself.

While dealing with Ozma + Ozmashade form-shift combinations, various other mechanics will overlap. These include:

Ozma will confuse and confound players will all manner of mechanical combinations from itself and its Ozmashades, but should you be successful, you will gain an achievement that automatically provides you with your very own