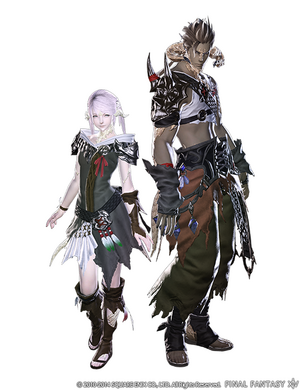 The Raen have assimilated into Far Eastern culture.

The Raen (レン族, "Ren Zoku," meaning "Ren Group") are said to be children of the Dawn Father Azim, the sun god of Auri creation.[1] Unlike their sister clan, the Xaela, the Raen have embraced a life of tranquility, long abandoning the nomadic lifestyle of their ancestors.[2]

Auri creation myth tells of a world formed by the Dawn Father Azim and the Dusk Mother Nhaama. These two deities came to quarrel over which should rule the new world, and created mortals to serve in their war by proxy. These were the first Au Ra—the Raen, children of the Dawn Father, and the Xaela, the chosen of the Dusk Mother.[1]

Though they waged a bitter struggle in the name of their creators, they eventually put aside their differences and learned to love one another, giving birth to a new generation. On seeing this, Azim and Nhaama returned to the heavens, leaving the world in the custody of their children.[1]

Believing themselves the children of the Dawn Father, the forebears of the Auri Raen left behind their homeland to settle across Othard. They were received with hatred and hostility in the early years, until a prominent warlord of Yanxia, impressed with their valor, forged an alliance with the strange race and took them on as retainers.[1]

No matter where they came to be, with their innate martial prowess, they readily found employment as soldiers and carved out places for themselves within spheres of authority. Before long, the Raen had assumed a prominent role as warriors in service of countless great warlords, and their members spread across the Far East, from the lands of Nagxia and beyond the Ruby Sea to the isles of Hingashi, where they earned a reputation as legendary swordsmen.[1][3]

Yet not all chose this life. Some embraced a life of tranquility and solitude, settling in the deep valleys of Othard's mountainous eastern reaches.[2] Others still desired to leave conflict behind completely, and availing themselves of Kojin wisdom, they created a great bubble of air at the bottom of the Ruby Sea, within which they built a village—Sui-no-Sato. To govern their fledgling society, they founded a system of hereditary rule led by the Ruby Princess, under whose guidance they live a life of seclusion, away from the turmoils of the surface.[3]

The Au Ra are unique among Eorzea's races in the extreme height disparity observed between genders. While male Au Ra can reach towering heights of over eighty ilms, females are short and slight, averaging no more than sixty.[1]

Their hardened skin and scaled tails, too, distinguish them clearly from other races.[1] The ancestors of the Raen believed their veins to run thick with the blood of Azim—their brilliant white scales and iron wills serving as proof of this divine lineage.[2] It is difficult for the tail or horns of an Au Ra to be removed, and they do not fall off periodically, instead growing continuously until they reach a certain size and length. If damaged, whether it be in a fall or in battle, the horns will regrow and repair themselves.[4]

The Au Ra take great pride in the majestic horns that protrude from the sides of their head, which also serve to enhance their hearing and sense of spatial perception.[1] This does not make their hearing better than a Lalafell, and their hearing is generally as good as the average Hyur, but they hear and process sound differently, through the vibration of the air within their horns.[4]

The Raen have fully assimilated into the cultures of Doma and Hingashi, and live faithfully according to the regions' traditions. Because they coexist peacefully with other races to ensure the safety of their own kind, they are generally viewed favorably compared to their Xaela cousins. Perhaps owing to the status they gained in the service of their warlords, they place particular importance on hierarchy and the master-servant relationship.[1]

As a result of their assimilation into the cultures of the Far East, the Auri Raen are very central to Doman and Hingan culture. While their numbers are relatively low, they make up a great deal of their hierarchies. Common clan names spoken of in Hingashi and Doma refer to predominantly Raen families. As such, much of what can be said of those cultures also applies to the Raen as a culture.[5]

Those Raen who have chosen solitude only rarely emerge from the valley mists to seek adventure in realms afar.[2] The Raen of Sui-no-Sato shun the world above, and almost never make contact with the surface.[3] Life beneath the waters of the Ruby Sea has given birth to an identity distinct from their land-dwelling kin, governed by the Ruby Princess who dwells apart from her subjects in Shisui of the Violet Tides.[6]

The Raen generally believe in the kami, a legion of divine spirits said to exist in all aspects of nature, from mountains and rivers to the crops they grow and consume. These kami feature in several creation myths, though the particulars of each tale differ from region to region. Though some of these divine beings can be likened to personifications of nature, enlightened sages and long-lived animals of legend may also be defined as kami.[7] It is rare, but possible for some Raen to maintain a belief in Azim.[2]

Though many of the Auri Raen occupy prominent roles in the Far East, they remain relatively uncommon compared to other races of the region. They make up only around ten percent of the population of Hingashi and Doma.[7]

They are also known to dwell in the dense jungles of Nagxia, and a select group of Raen has founded a civilization beneath the Ruby Sea in the village of Sui-no-Sato and the palace of Shisui of the Violet Tides.[3] A small population of Raen—those exiled or fleeing persecution—also dwell among the Malaguld tribe of Xaela.[8]

Surnames occupy a special position in Eastern culture—an honor afforded only to aristocrats, warlords, and the samurai class. Many are derived from the names of weapons or military ranks, as symbols of their martial prowess, with examples including "Buhen" ("fight valiantly in battle"), "Yatsurugi" ("eight blades"), and "Obinata" ("blades on waist"). Though not officially recognized, many members of the subordinate classes sport self-bestowed epithets which are often—but not always—derived from their profession or place of origin.[1] For example, a merchant may take on the name "Naeuri" ("seedling seller") and a farmer or hunter may use "Torioi" ("bird chaser") as a surname.[8]

Far Eastern given names are taken from the natural world, with male names generally inspired by strong, uncontrollable forces (mountains, seas, animals, or the elements) and female names chosen from plants, seasons, animals, and similarly beautiful and elegant things. For example, males may be named "Unzan" ("cloud mountain") or "Gyosei" ("the dawn star") while females may have names such as "Ajisai" ("Hydrangea") or "Koharu" ("small spring").[1][8]

Moreover, while there exists extended vowels in the Far Eastern tongue, these are not rendered in Eorzean writing. For example, the name "Hozan"—made up of the four phenomes "ho," "u," "za," "n"—omits the extraneous "u" from its spelling when rendered in Eorzean script. Similar fine points of pronunciation are ignored in names, such as hyphenation or apostrophes, but are present in compound words that consist of the first word ending and second word beginning with a vowel (such as "sune-ate," meaning "shin-guard").[8]

Additionally, the Raen of Sui-no-Sato universally use the surname "Sui" meaning "water" with the sole exception of the Ruby Princess who uses the name "Shisui" meaning "violet water."

These naming conventions also apply to the Hyur and Roegadyn of the Far East, such as Hien Rijin and Gosetsu Daito.

Far Eastern names such as those used by the Raen are based on named used in 17th century Japan.[8]