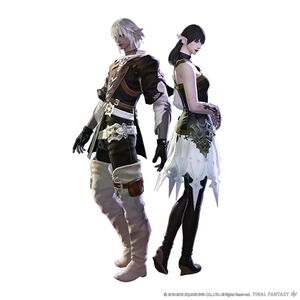 The Duskwight Elezen dwell in deep forest caves and caverns.

Centuries ago, a number of Elezen sought out a life of peace and seclusion in the depths of Eorzea's caves and caverns. Today, they are called the Duskwight (シェーダー族, "Shēdā Zoku," meaning "Shader Group"), though to their Wildwood cousins they are known simply as the "Greys," after their preference for darkness and stone.[1]

These cave-dwelling Elezen are the descendants of a branch that split from the main Wildwood clan during the founding of Gridania, choosing instead to remain in the stone-hewn chambers of Gelmorra or seek out new subterranean sanctums.[2] The Duskwight despise the "shackles" of urban life, and it is not uncommon for them to avoid the city-states altogether.[3]

Some even resort to brigandry to survive and, as a result, they are often looked upon with scorn by the citizens of Gridania. Those who have chosen to make their home in the city often suffer undue discrimination at the hands of their neighbors.[2]

Together, the Hyur and Elezen who dwelled in the Black Shroud put aside their differences and founded the subterranean city-state of Gelmorra, which lasted for over three centuries. However, when Jorin Lightheart used conjury as a means to communicate with the elementals of the forest, the people of Gelmorra decided to leave their city behind and found Gridania.[4]

However, for many of the Elezen, Gelmorra had become their home, and the ancestors of the Duskwight refused to leave the city they'd created and felt betrayed by the Hyur and their fellow Elezen. Prideful in their city and civilization, those who remained attempted to continue operating Gelmorra. The task proved impossible, as three-quarters of their population had left nearly overnight; the systems put in place to make Gelmorra inhabitable began to break down, and could not be repaired for they lacked those with the skill to do so. Their Mun-Tuy farms lacked the requisite numbers to tend to them, and so their food supply ran low.[5]

Over generations, they struggled and suffered in a vain attempt to maintain their beloved home.[5] These years spent in dank, shadowy caverns caused their skin to take on darker hues over time.[2] Ultimately, though they wished to remain, the Duskwight were forced to leave Gelmorra. Some among them still blame the plight of their lost civilization on their Wildwood cousins and the Hyur of Gridania, with particular spite directed towards the Wildwood. Many Wildwood, failing to understand this animosity, later came to see the Duskwight as undesirable due to their stereotypical connection with brigandry in the Twelveswood.[5]

Today, many Duskwight dwell within the sylvan city-state with some facing undue discrimination as a result of the terse relationship between their clan and other forestborn. Still, the reputation for brigandry persists, as the Redbelly Wasps, a group of Duskwight bandits, stalk the South Shroud from the ruins of Boughbury—now called Redbelly Hive.

Like their Wildwood cousins, Duskwight Elezen are slender of body and long of limb, with males and females often reaching heights of greater than eighty and seventy-seven ilms, respectively. They also share their elongated lifespans and slightly-delayed physical maturity.[2] While there are few differences between the genders, Duskwight males are often regarded as more stern and authoritative, while females are regarded as more passionate and unyielding.[6]

Generations of calling shadowy caverns home have caused their skin to generally take on darker hues. For this selfsame reason, they possess an evolved sense of hearing—their ability to ascertain the source of a sound with unerring accuracy, unaffected by echoes or reverberations, often likened to that of a bat.[2] This natural gift grants them an uncanny awareness, which many have put to exemplary use in the field of hand-to-hand combat.[6]

The customs of the subterranean city of Gelmorra are still practiced by the Duskwight to this day, from architectural advances developed to stake out comfortable residences in dank, humid caves to mystical wards that serve to stave off the wrath of the elementals. The Duskwight-fashioned pomanders—urns engraved with mystic glyphs of great power and filled with fragrant herbs - are an art without parallel in the realm. Duskwight cuisine is famous for its use of Mun-Tuy beans, a staple food in the subterranean depths, where they grow in abundance with no need for sunlight. That these dishes have come to be considered a Gridanian delicacy is an ironic twist, given the history between the two clans.[2]

Gridanians have long perceived the Duskwight as outcasts and brigands, as many of them resort to common theft and banditry to make ends meet. Some Duskwight still dream of restoring a measure of prosperity to the fallen city of Gelmorra, reestablishing it as a settlement for their people to remedy this situation.[7]

As the Duskwight Elezen generally shun civilization, they make up a very small percentage of any of the realm's city-states, if any at all. They are most populous in Gridania, where they make up approximately ten percent of its population.[8]

While the Elezen adopted the common tongue eras ago, remnants of their old tongue can be seen in the spelling and pronunciation of their names, which speaks to the importance they place on tradition.[2] While the structures and spellings of the names are extremely similar, and they follow the same phonetic rules, a Duskwight and a Wildwood Elezen will never have the same last name. Due to generations of bad blood between the two clans, the surnames once commonly used by both have been claimed by one side or the other.[9]

The spelling and phonetic rules are extremely similar to those of French, and while there are no set-in-stone guidelines for male or female names, there are some distinguishing features.[9] Male names are typically lengthy, often ending in the syllables "-oix" (pronounced "o-ah"), "-aux" (pronounced "oh"), or a silent "t" ("mont," pronounced "moan," and "geant," pronounced "john"). In contrast, female names are often shorter and regularly end in diminuitives such as "ne," "ette," "elle," and "ie".[2]

Upon close examination, similarities between Hyuran (Louis, Hilda) and Elezen (Louisoix, Hildie) given names can be observed. While some scholars attribute this to a common ancestry shared by the two races, such theories have been roundly dismissed by the proud Elezen.[2]