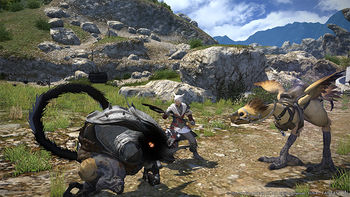 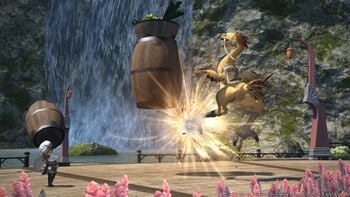 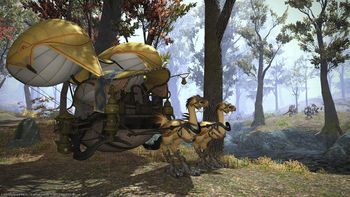 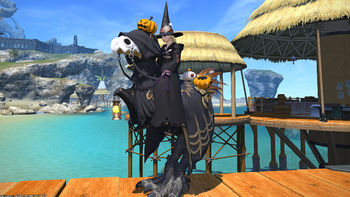 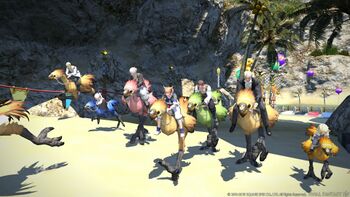 In A Realm Reborn, Chocobos serve not only as a form of transportation, but also as a companion that will fight alongside you. Players will acquire their own Chocobo Mount at level 20+ through the Main Scenario Quests. At level 30+ players will unlock their Chocobo Companion that will fight alongside the player. Players can customize the looks of their players chocobo by equipping Chocobo Barding or changing their Colors. Players can further improve and personalize their chocobos through Chocobo Raising. In Gold Saucer, players can partake in Chocobo Racing with special, race-bred birds.

To obtain your chocobo mount, you must be level 20+ and have progressed through the main story enough that you have joined a Grand Company. To unlock the mount, you need to complete the quest

My Little Chocobo. In the quest, you need to purchase a Chocobo Issuance from your Grand Company Quartermaster for

200 Company Seals. The game now gives you enough seals for the issuance directly.

Players can summon their mounts by dragging and activating the mount icon from Mounts Menu.

Companions are pets that will fight alongside you. Players will not only be able to level up his or her Chocobo companion but also customize their looks and abilities. Players can specialize their personal Chocobos into tanks, healers or damage dealers by allocating their skill points into the Defender, Attacker or Healer skill trees.

To unlock the Companion, players must have completed the level 30 quest

Chocobo Racing is a Gold Saucer mini-game introduced in patch 2.51, allowing you to breed, train and race your own chocobo against other players in return for Manderville Gold Saucer Points and other rewards.
Note that your Racing Chocobo is NOT the same as your Mount/Companion Chocobo.

Chocobo Raising allows the player to train, improve and customize their Mount/Companion Chocobo using a

Chocobo Stable. This primarily is a passive means for Companion experience and a way to set their favorite food.

Chocobo Coloring allows the player to change the colors of their Mount/Companion Chocobo while stabled.

Chocobo Bardings are customization items that can change the look of your chocobo. They do not give speed or stat bonuses.

Note that Chocobo Barding will change the looks of both your Mount/Companion Chocobo and your Racing Chocobo.

Known for their masks modeled after the ever-faithful chocobo, Chocobokeeps can be found at outposts across Eorzea offering adventurers use of their chocobo porter service.

Mounted on one of their specially bred chocobo's, travel swiftly and safely to one of several nearby stables. These chocobo have been trained to travel specific routes to their destinations, so relax, enjoy the view, and let these trustworthy taxis handle the rest.

The map icon for Chocobokeeps is

Despite the emergence of airships, chocobos have retained their place as a traveler's best friend. Be it as bearers of a merchant's wares, steeds for battle-bound soldiers, or an adventurer's means of locomotion; the long-legged avian creatures are still very much a common sight.

These flightless birds have sturdy legs with which to bear you across great distances swiftly.