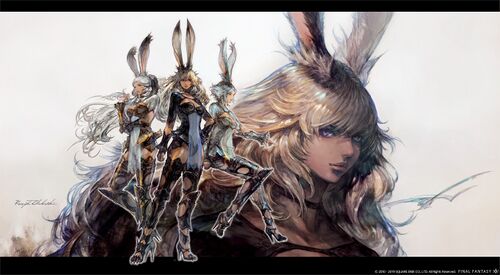 The Viera hail from southern Othard.

Of tall stature and frame, the Viera (ヴィエラ, "Viera") are similar in appearance to the Hyur and Elezen, save for their long, leporine ears.[1]

The word Viera means "people of the wood" and they are most commonly found in the forests of southern Othard, with the Rava clan making its home in the Golmore Jungle and the Veena making their home in the forests along the foothills of the southwestern Skatay Range.[2]

They are a strictly matriarchal people; Viera males are notoriously rare and reclusive, shunning contact even with their own kin. They are also known for their incredible longevity, as they can live to ages upward of two-hundred and forty years.[2]

On the First, this race is known as the Viis, and many remain in their ancestral homeland, The Rak'tika Greatwood.

For centuries, even since the age of Ivalice, many Viera tribes have remained hidden in the jungles, content with their self-imposed solitude.[3] Efforts by past kings to bring Viera lands under Dalmascan rule were all met either by indifference or violence, and the nation ultimately suffered the Viera their self-governance, with the promise their villages would not take up their bows against the throne.[2]

It was not until the past several generations that a Viera living outside of her homeland was unheard of, yet recently more and more of the leporine women have abandoned their ancestral homes for the comforts of the cities.[2] Those Viera who have done so tend to be held in high regard, their small numbers lending them an air of mystery with some members of the upper class paying large sums to be seen with one of their kind.[4]

Thirty years ago, when the Garlean Empire occupied Dalmasca, several imperial army units were sent into Golmore Jungle to round up Viera and bring them to Rabanastre. Though only a few of the soldiers returned, the few Viera with them appeared to have followed on their own volition.[4] However, while the Viera had long been treated as equals by the Dalmascans, like any not of the pureblood Garlean race, they have been relegated to life as second-, or even third-class citizens, a change that has proved especially difficult for the Viera who left their forests in pursuit of freedom.[5] 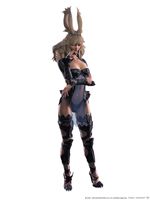 The Rava make their home in the Golmore Jungle. 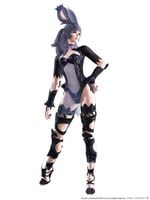 The Veena dwell in the southwestern foothills of the Skatay Range.

The Viera are roughly divided into two clans. The Rava live primarily in the lush, colorful Golmore Jungle, distinguished by their melonated skin,[6] while the Veena have paler skin, who reside in the mountains of the Skatay Range that rise above their forest home in its foothills.[7] Members of both clans have become more common in cities such as Rabanastre in the past few generations.[2]

Viera society is purely matriarchal,[2] and each tribe follows its own strict code and will meet swift punishment to any who would defy these laws. As such, many a Viera will spend her life bound to the territory of her ancestors, both unwilling and unable to venture beyond its borders. While the tribes are wholly independent, they have all agreed to uphold a single standard: shun all contact with the outside world unless it is to protect the jungle.[3] This code is known as the "Green Word," and those who break it face the threat of exile.[1][2] However, the past several generations have seen more and more Viera choose to break the Green Word and leave the forest for the cities.[2] At last count, the Viera made up approximately five percent of the nation of Dalmasca.[8]

Befitting the name of "people of the wood," Viera women live largely as hunters and gatherers, laboring not only to protect the wood, but to nurture them.[7] They clear undergrowth, plant seeds, and eradicate vermin.[2] To the Viera, their forest is sacred ground, and they will not suffer the desecration of their sovereign domains by outsiders. This is especially true of those who would dare hunt their lands.[3] Even the mere presence of outsiders can be taken as a grave offense.[9]

Viera live upward of two-hundred and forty years, and more than eight in ten Viera are born female. It is not until the thirteenth nameday—when the individual moves from adolescence into adulthood—that the individual's gender becomes apparent. For the next two centuries, the Viera maintain their physical youth, making it nigh impossible to discern their age simply from outward appearances.[2] Known for their unmatched beauty, their traditional attire seems to accentuate their bodies and—perplexingly to the eyes of outsiders—includes tall stiletto-heeled sandals that would typically make traversing the forest difficult.[10]

Though males are not typically found in villages, they play an important role in Viera society. When it is revealed a Viera kit is male, they are given to the care of another, that he may learn the ways of the Wood-warder—protectors of the forest. Similar to Miqo'te Keepers of the Moon, Viera males are, for the most part, reclusive, shunning contact with even their own kin. Every three to five summers, they return to the village of their birth, sowing their seed and taking any recently discovered jacks as their wards and teaching them how to survive without the crutch of companionship. Only following countless seasons of training and strict adherence to the Word of the Wood will the students earn the title of master, and be allowed to seek solitude. More than a few perish in this brutal rite of passage, further thinning the tribe's males until only the strongest remain.[2]

Without a supportive community the males must constantly struggle to survive. Food, clothing, weapons, medicines—all must be procured or crafted by the individual and without the aid of another. The male lives and dies alone, and this has gone unchanged for countless generations. The duty of a Wood-warder is to see their tribe's demesne remain untouched by the destructive whims of outsiders. They do so from the shadows, oft choosing to shoot first and not bother with questions. Females are more open in their relationship with the wood, albeit in a loose sense. If asked whether the segregation of sexes was awkward, a Viera might answer that "The value of coexistence will not be found 'neath a loincloth. Long has our kind endured understanding that the distance 'twixt two bodies does not dictate the distance 'twixt two souls." Those who enter the wood seeking a male Viera will be met with either disappointment or death.[2]

Despite the might of their males, the martial prowess of Viera females is as formidable as their counterparts', they merely choose to devote their attention to the protection of their hearth and young.[2]

The Rava and Veena clans share many traditions, naming practices among them. Thus, a Viera's forename is not indicative of the clan to which she belongs─rather, it is the lifestyle she leads that determines whether she bears a “forest” or “city” forename. Traditional Viera forenames given at birth are also referred to as “forest names,” as they are used by those Viera still residing in their homeland─which is the Golmore Jungle, in the case of the Rava, or the forest skirting the Skatay Range for the Veena. Forest names resemble real-world Icelandic names and are pronounced similarly─in the names “Theja,” and “Nojra,” for instance, the “j” sounds more like an English “i.”

In practice, however, one will rarely encounter a Viera using her forest name, as those who choose to leave their homes and strike out into the wider world will generally choose new “city names” for themselves to mark their parting from the traditional Viera way of life. These chosen names are often inspired by the names of other races they encounter, or simply things that they like, such as “Cherry” or “Morning Glory,” and so vary widely between individuals. Incidentally, “Fran” is one such name.

In the Viera's forest homeland, surnames are taken from the name of the village of one's birth. As such, the most common surnames are the names of the largest Viera villages. However, as with forenames, surnames are generally discarded or replaced once one chooses to venture into the wider world.

Of tall stature and slender frame, the Viera's physical appearance is strikingly similar to that of the Hyur and Elezen, save for their distinctive long ears. Adhering to a strict code known as the Green Word, they are prohibited from contact with the outside world under threat of exile. Their society is purely matriarchal, and males of age are seldom, if ever, found within the bounds of any village. They instead serve as protectors of the wood from the shadows, that no evil may ever encroach on their sacred lands.