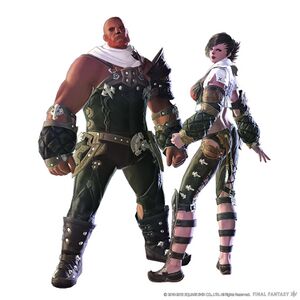 The Hellsguard clan are known for producing skilled mercenaries.

The Hellsguard (ローエンガルデ族, "Rōengarude Zoku," meaning "Roenguard Group") are a small clan of Roegadyn that have carved out a home in the north of Abalathia's Spine. It is clan tradition to enter the mercenary trade; thus the Hellsguard took to giving themselves easily remembered names made up of words in the common tongue. They are a common sight on the streets of Ul'dah, earning a living as sellswords or bodyguards.[1]

Hailing from Aerslaent in the Northern Empty, a group of Roegadyn left many, many years prior to the Sea Wolves arriving on Vylbrand aboard the Galadion. Crossing over to the continent of Aldenard, they settled in the mountains, where their descendants—the Hellsguard—reside to this day.[2] For centuries, their clan has stood vigil over the fiery peaks amidst which they founded their village—mountains of flame which they believe to be the gates to the underworld itself.[2][3]

At the turn of the eleventh century, the city-state of Ul'dah first enlisted the aid of Hellsguard sellswords to aid in their ongoing war against Sil'dih.[4] As the city-states of Eorzea found themselves embroiled in an discord and strife, Hellsguard warriors became highly sought after as mercenary conscripts. Ultimately, their esteem was tarnished by incidents in which these warriors turned on friend and foe alike. As the realm gradually shifted to peace, this warrior tradition all but disappeared from the realm beyond their mountain village.[5]

Still today, descendants of the Hellsguard are a common sight in the city-state of Ul'dah, where they work a variety of trades ranging from mercenaries to weavers to miners.

The Hellsguard possess bodies and minds tempered by the unforgiving heat of the volcanic regions they inhabit.[3] Blessed with the same bulk and brute strength as their Sea Wolf cousins, they can be distinguished by the color of their skin, which often takes on reddish hues akin to molten rock. Hellsguard males average eighty-four to ninety ilms, and women reach an imposing seventy-five to eighty-ilms. Their bodies are thick with muscle and sinew, and their hair is thick and hard, with some showing a natural wave. They take pride in their locks, and have developed a tradition of unique braids and weaves.[2]

The Hellsguard derive their name from the fiery peaks amidst which they founded their village—mountains of flame which they believe to be the gates to the underworld itself. For centuries they have stood vigil to prevent the passage of souls back to the realm of the living.[2][3]

With vegetation scarce in their mountain home, the Hellsguard believe in letting nothing edible go to waste, and have traditionally shown little interest in culinary developments and delicacies. Their preferred attire shows a similar propensity for rugged functionality, and consists predominantly of unadorned clothing fashioned from animal skins. The influence of the unforgiving climes they call home on their culture is readily apparent, as they value reticence and perseverance above all virtues.[2]

As the harsh environs of their homelands produce little sustenance, the second- and third-born are often sent forth from their mountain villages, with many and more making their way to the great cities. It is there that their sheer girth and steely demeanors place them in high demand as soldiers and sellswords, allowing the young of even the largest families to surpass their elder siblings in prosperity.[3]

Among the fearsome mercenaries they produced were greataxe-wielding warriors capable of harnessing their inner beasts and translating that power into unbridled savagery on the battlefield. Though their fighting style has become largely obscure since peace came to the realm, and their art has all but faded from the world.[5] Hidden upon Abalathia's Spine, however, there is a Hellsguard village where the art of the warrior still thrives.[6]

Hellsguard warriors' traditional armor and axes are similarly rare. As part of an ancient code, when warriors betook themselves to gentler pursuits, their axes would be beaten into ploughshare and their armor bound to the land where they experienced their heroes' journeys. Hellsguard armor and Bravura axes are forged in their homeland using secret techniques to work the metal of fallen stars in living crucibles of molten rock. They also made use of ancient enchantments upon their armor to incite their inner beasts.[5] The Hellsguard believe both the lava and the iron are imbued with Hydaelyn's life force, and are therefore capable of enhancing vitality when worn on one's person. Pelts are incorporated not only as a show of respect for lives taken, but also to heighten a warrior's ability to draw upon the beast within.[6]

Many Hellsguard partake in ascetic firewalking, training from a young age to bring out their latent mystical talents. It is doubtless due to this age-old tradition that the Hellsguard have produced so many great mages, in addition to the fearsome sword and axe-wielding warriors for which their kind are best known.[2] Despite this, most Hellsguard have no patience for alchemy, regarding the trade as dark and sacrilegious sorcery that spurns the Twelve.[7]

Hellsguard can also often be found working as bodyguards, smithies, and miners.[8][9] They're particularly famous for the unique blacksmithing techniques honed in their homeland. It was the Hellsguard who invented the halberd, their marauders using them to repel mounted units and pull riders from their saddles.[10]

While relatively few in number compared to the Sea Wolves, the Hellsguard are generally more widespread owing to their mercenary tradition. They account for approximately ten percent of the population in both Ul'dah and Ala Mhigo, but can mostly be found along Abalathia's Spine in regions such as the Farreach.[12][13]

The Roegadyn of the Far East, such as Gosetsu Daito, and the Roegadyn of Ilsabard, such as Grynewaht, resemble the Hellsguard heavily, but are considered their own, distinct clans.

In contrast to the Sea Wolves, the Hellsguard are more prone to adapt to their surroundings and often adopt "translated" names rooted in the common tongue, that they might be more easily remembered and addressed by other races, in particular the masters they serve as sellswords.[14]

Names consist of two words, with male names typically derived from the natural world, whether it be vegetable or animal, inanimate or animate, abstract or concrete ("Tall Mountain"). Female names follow the same rules as male names with none of the restrictions on the second word found in Sea Wolf names, often taken from flora ("Blue Lily"). There are many female names that do not derive from trees and flowers, however, and nor is the use of flora exclusive to female names, as many male names also incorporate them.[2][14]

Highly independent in nature, most Hellsguard despise being defined by the actions of anyone but themselves, and therefore those who leave their mountain homes for the city-states of Eorzea will often completely drop their family names, choosing only to be referred to by their first.[14] Though few in number, there remain some who still speak the old tongue.[2]