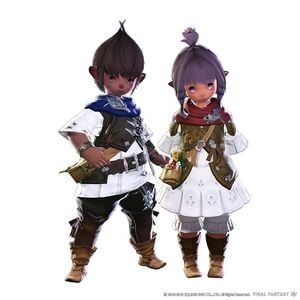 The Dunesfolk reside in arid deserts.

The Dunesfolk (デューンフォーク族, "Dyūnfōku Zoku," meaning "Dunefolk Group") can be found on the scorching sands of Thanalan and other such arid areas.[1] It was the Dunesfolk who founded the great civilization of Belah'dia, which would later splinter into Sil'dih and Ul'dah, the latter of which prospers still today. Famous for their obsession with commerce, practical by nature, and swift to put ideas into action, their temperament is well-suited to seizing business opportunities, and it is little surprise that they played such a great role in building Ul'dah into the bustling center of commerce it is today.[2]

Like all Lalafell, the Dunesfolk trace their ancestral heritage to the south sea isles, where they lived an agrarian lifestyle. Eventually, they migrated over to Eorzea in pursuit of trade.[2]

When the icy winds of the Fifth Umbral Calamity abated, the lands of Yafaem transformed into a fertile landscape. Near the five-hundredth year of the Fifth Astral Era, the region's people came together to establish the city of Mhach. At the time of its foundation, it was merely among the twelve undistinguished city-states struggling to survive. However, around the year 800, a Lalafellin sorceress named Shatotto invented a form of magic drawn from ambient aether—black magic. Using this power, they bolstered their army and rose to become a substantial military power.[3]

In the autumn years of the Fifth Astral Era, the Mhachi began to perfect voidmagicks. In mastering this power, they began to believe in the supremacy of their nation. By the middle of the thirteenth century, political and military posturing between Mhach and its rival Amdapor led the entirety of Eorzea to become entangled in an inescapable web of strife, starting the War of the Magi that continued for three centuries. After the Battle of Amdapor ended in an Amdapori victory, the toll of black and white magic upon the land resulted in the coming of the Sixth Umbral Calamity.[3]

While many of the Mhachi put their efforts into creating the "Ark," a vessel designed to transport their people from their doomed home of Yafaem to the floating island of Dun Scaith, these ill-fated souls would never see their safe haven. Several survivors fled to higher ground, but returned to Yafaem to learn they were the inheritors to a wasteland of salt-clogged swamps where even the hardiest of reeds refused to take root, let alone crops that might sustain a family.[3]

The dawn of the Sixth Astral Era saw a great suffering of magi, with all even remotely proficient in spellcraft facing persecution. Those who used sorcery to protect themselves from the stones of fearful peasantry were often subject to greater retribution.[4] The sons of fallen Mhach concealed themselves in the remote outlands for a time, living a nomadic existence in the sandy wastes, they came to be called by the name they bear today.[2] 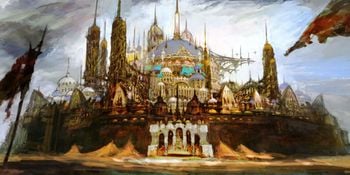 The Dunesfolk founded the merchant city of Ul'dah.

As time passed, bitter memories became history, and history legend. After several centuries, the realm forgot its fear of magic, and instead desired it as a means of military might. The Dunesfolk, transformed by their generations in the desert outskirts, sought to reclaim the rightful place of magi. Banding together, they ventured into the wilds of Thanalan in caravans propped on the backs of great beasts of burden, and there used the arts of their forebears to find water flowing beneath the parched lands. What began as a well became a town, and grew into the nation of Belah'dia by the year 737.[2][4]

For two hundred years, Belah'dian civilization flourished in relative peace, but a war of succession between the last sultan's twin sons tore the nation in two. The followers of King Sasawefu founded Sil'dih, and those loyal to Sasagan Ul Sisigan I founded Ul'dah. The two would come to conflict during the War of the Sisters, which ultimately saw Sil'dih destroyed by the necromantic powder known as Traders' Spurn and purged of the undead by the Immortal Flames.[4]

The first Ul Dynasty of Dunesfolk sultans ended not long after; Sasagan Ul Sisigan III was overthrown by Baldurf Thorne in 1224. However, the Thorne Dynasty ultimately abdicated once their duty to the nation was complete, leading to the restoration of the second Ul Dynasty in 1355. The creation of the Syndicate lost much of the royal house's power, and the current sultana Nanamo Ul Namo is considered by many to be little more than a mouthpiece for the Syndicate.[4][5]

The Lalafell average about thirty-five ilms in height and are by far the smallest of Eorzea's races. What they lack in physical strength they make up for in swiftness of reflexes and sharpness of mind. Underestimating a Lalafell has been a costly mistake for more than a few men.[2]

The degree to which the Dunesfolk have adapted to their surroundings can be seen in their tanned skin, able to withstand the harsh rays of the sun that beat down on Thanalan, and their luminous eyes, clear as glass with pupils covered by a thin, glossy membrane to keep out the sand and glaring sunlight. [2]

Many are blessed with an aptitude for magic, with Dunesfolk accounting for numerous accomplished thaumaturges as well as high-ranking members of the Order of Nald'thal clergy. Dunesfolk miners also rival the Roegadyn in their numbers and accomplishments, making up for their lack of brute strength with resourcefulness and the ability to delve into the narrowest tunnels.[2]

Many Dunesfolk attach a small, traditional gemstone to their forehead, a symbol of their guardian deity. This is a practice that dates back to and serves to honor their ancestors, the sorcerers of Mhach. Dunesfolk are also known to feed their children cups of herbal tea infused with minuscule portions of diluted snake and scorpion venom. As such, Dunesfolk raised in traditional households often display a remarkable resistance to certain poisons.[2]

The Dunesfolk are adamant about scholasticism and place the advancement of knowledge before all else.[6] Other races tend to perceive male Dunesfolk as introverts who care more for books, business, and the prosperity of Ul'dah than the goings on of the realm, and tend to see female Dunesfolk as gentle souls with a love for fortune-telling and divination.[7]

Ul'dahn thaumaturgy is descended from the practices of Belah'dia, which were originally created to integrate the black magicks of their Mhachi forebears into their worship of the sun goddess Azeyma.[8] This form of magic was not as potent yet also less dangerous to the realm, as it does not use ambient aether from the land, only the living aether of the body. The priests of the Order of Nald'thal have cultivated and passed on this knowledge of the arcane into the current day.[9]

Unlike many of the realm's other races, the two clans of Lalafell harbor no particular resentment for one another. Inter-clan marriages are commonplace, with many Lalafell today possessing both Plainsfolk and Dunesfolk blood—such as Mirage Trust chairman Teledji Adeledji.[2][10]

In Dunesfolk culture, the insatiable aldgoat is a symbol of wealth and prosperity, and aldgoat fetishes are presented to families with newborn children.[11] Early Dunesfolk tribes also considered the albino scorpion to be an ill omen. Tales of the alligator garfish are often used by Dunesfolk mothers to frighten children who do not listen to their elders, go to bed early, or chew with their mouths closed.

The pretzel is a staple of Dunesfolk cuisine, a traditional bread twisted into the shape of a knot and sprinkled generously with coarse-ground salt before being baked to a deep brown resembling the twilight over Thanalan.[12]

Lalafell are one of the most well-established races in the realm of Eorzea, and can be found in great numbers in nearly every city. The Dunesfolk clan makes up the majority population of Ul'dah, where they account for forty percent of its total population.[13] It appears that there is a population of Dunesfolk on the desert island of Thavnair—home to the city of Radz-at-Han—as well.[14] Papalymo Totolymo is also said to be of the Dunesfolk, though he lacks their distinctive luminescent eyes.[15]

Lalafellin names are made up of a given name and a "courtesy name" bestowed upon reaching adulthood. The latter is not a family name, but rather unique to the individual. Lalafellin names trace their origins to the old tongue, and are ruled by rhyme, rhythm, and repetition. Dunesfolk names are, at a glance, similar to those of their Plainsfolk cousins, but closer examination reveals subtle-but-sure differences in their rhyming schemes. Male Dunesfolk follow an "AAB-CCB" pattern, as seen in "Lolorito Nanarito," while female Dunesfolk, such as "Momodi Modi," conform to an "AAB-AB" scheme.[2]

These phonemes are usually limited to one or two syllables each. As these rules are different from those of the Plainsfolk, one can discern a Lalafell's clan and gender by simply looking at a name. There are rare cases when the B phoneme will seemingly have one syllable such as Zozonan or Nanalai. The "n" and "i" here are, in fact, the remnants of sounds that were once paired with a Lalafellin vowel that, over time, has disappeared from speech, and therefore become silent in names.[16]

As a whole, Lalafellin names are notably different in both spelling and pronunciation from those of other races, owing in part to the old Lalafellin tongue—used by the clans before they arrived in Eorzea—containing only five distinct vowels: a ("ah" as in "arm"), e ("eh" as in "bet"), i ("ee" as in "beet"), o ("oh" as in "home"), and u ("ooh" as in "dude").[2][16] Perhaps coincidentally, the language shares this trait with the ancient Far Eastern tongues of Doma and Hingashi, though those languages do not distinguish the letter "r" from the letter "l" and do not use the latter. 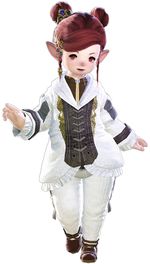 Momodi Modi is a senior member of the Adventurers' Guild.