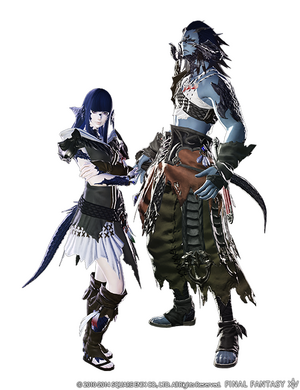 The Xaela tribes live a nomadic life on and around the western steppes of Othard.

The Xaela (ゼラ族, "Zēra Zoku," meaning "Zela Group") are said to be the children of the Dusk Mother Nhaama, the moon goddess of Auri creation.[1] Unlike their sister clan, the Raen, the Xaela are free spirits who roam the vast western steppe of Othard in close-knit tribes hunting, gathering, and warring as their ancestors have for countless generations.[2]

Auri creation myth tells of a world formed by the Dawn Father Azim and the Dusk Mother Nhaama. These two deities came to quarrel over which should rule the new world, and created mortals to serve in their war by proxy. These were the first Au Ra—the Raen, children of the Dawn Father, and the Xaela, the chosen of the Dusk Mother.[1]

Though they waged a bitter struggle in the name of their creators, they eventually put aside their differences and learned to love one another, giving birth to a new generation. On seeing this, Azim and Nhaama returned to the heavens, leaving the world in the custody of their children.[1]

Among the peoples of the Far East, it is believed that the Au Ra of the Azim Steppe were the first to keep livestock. They initially tamed horses to serve as mounts, and it was this achievement which led to the Au Ra's decisive rise to dominance over the plains. When the Raen subsequently departed their ancestral home, they took with them the knowledge of rearing and riding horses to the lands beyond the Steppe. After the horse, the Au Ra turned their hand to taming the yol, and these new mounts saw them expand their dominion to the skies above the Steppe.[3]

The Xaela have to this day not abandoned their ancestral home, living a nomadic life as hunters and gatherers on the vast Azim Steppe. With suitable grazing land sparse, conflict between individual tribes is common, with tribes forming, disbanding, and dying off in a ceaseless cycle of war and bloodshed.[1]

At last observation, Xaela tribes numbered fifty-one, though there is a high likelihood that recently splintered or merged tribes have rendered that count outdated.[1] Of late, rumors swirl of a swelling of tribes who pledge spiritual allegiance to the Dusk Mother, and the abductions that have followed.[4]

Not all Xaela dwell upon the steppes, however. In 1557 of the Sixth Astral Era, some among the Xaela who lived in frontier towns of Othard fell under subjugation of the Garlean Empire. When they arrived at last in Eorzea in the year 1562, they found themselves drawn to the plains of Coerthas, and hoped to adopt the nomadic ways of their ancestors, only to be masssacred by the people of Ishgard.[5]

The Au Ra are unique among Eorzea's races in the extreme height disparity observed between genders. While male Au Ra can reach towering heights of over eighty ilms, females are short and slight, averaging no more than sixty. While their size and stature is almost identical to that of the Raen, their physical strength, hardened by generations of war and conflict, far outstrips that of other races.[1]

Their hardened skin and scaled tails, too, distinguish them clearly from other races.[1] The ancestors of the Xaela believed their veins to run thick with the blood of Nhaama—their lustrous black scales and fiery wills serving as proof of this divine lineage.[2] It is difficult for the tail or horns of an Au Ra to be removed, and they do not fall off periodically, instead growing continuously until they reach a certain size and length. If damaged, whether it be in a fall or in battle, the horns will regrow and repair themselves.[6]

The Au Ra take great pride in the majestic horns that protrude from the sides of their head, which also serve to enhance their hearing and sense of spatial perception.[1] This does not make their hearing better than a Lalafell, and their hearing is generally as good as the average Hyur, but they hear and process sound differently, through the vibration of the air within their horns.[6]

As nomads, a Xaela tribe is only as wealthy or prosperous as the size of its herd. From horses to dzo to the great winged yol, preferred breeds of livestock vary from tribe to tribe, but nonetheless the herd—both its quality and scope—symbolizes the strength and status of the tribe as a whole.[1][3]

Meat, fur, skin, bones—the Xaela let no part of any beast go to waste. In this way, the herd provides not only food and clothing, but even shelter from the elements in the form of the tents that serve as temporary housing.[1]

The Xaela are known to consume not only the flesh of their animals, but their innards and blood as well. They are also known for their dairy products, including an alcoholic beverage made from beasts' milk known as kumis. Those who have partaken of this drink beneath the yurt of a Xaela can take pride in knowing they have been accepted as a friend—at least for the moment.[1]

The fiercely tribal Xaela cling tenaciously to their nomadic way of life and largely shun relations with other races, even viewing strangers of their own kind as potential enemies. As such, they are typically regarded with suspicion and hostility. On the steppes which they call home, the Xaela speak the old Auri tongue to this day.[1]

On the final day of Tsagaan Sar—the Xaela lunar new year—the Xaela hold an annual ceremonial battle known as the Naadam to decide who will claim dominion over the vast steppe for the coming year.[7] This often also involves reigning on high from the Dawn Throne, though the victorious tribe is allowed to waive this right should they choose to.[8]

To even qualify for participation in the Naadam, young Xaela must undertake a rite of passage at Bardam's Mettle, running a gauntlet of fearsome foes to reach an ancient altar, the oldest in the land, and tame a yol, a giant cloudkin. In so doing, one earns recognition as a warrior of the steppe and the chance to emerge from the battle as khagan.[9]

Xaela names are relatively unorthodox, composed of a given name and tribal name. They are unique, however, in that they were passed down as sounds instead of letters, as the Xaela did not develop a written language until comparatively recent times. As such, upon coming in contact with lettered cultures, individual Xaela are forced to come up with spellings of their own devising, leading many to perceive their names as needlessly confusing and nigh unpronounceable.[1]

The Xaela, being nomadic, live lives that are one part solitary—when traveling as a clan—and one part community—when they interact with other clans they come across in their migrations. Because of this, similar names are used throughout the Azim Steppe, but they often feature slightly different spellings due to evolving separately in isolated clans. The male names "Jagadai," "Chaghadai," and "Tsagaday" are all, essentially, the same name. However, in Othard, they are considered unique.[10]

Xaela names are based on Mongolian words and names used around the 15th century.[10]