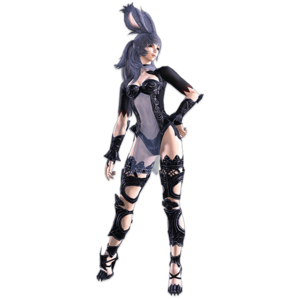 A Viera of the Veena tribe, native to the Skatay Range.

The Veena clan (ヴィーナ氏族, "Vu-ina shizoku" meaning "Veena Group") are native to the forests at the foothills of the Skatay Range and live as a hunter-gatherer society. While male Veena stand guard over the forests they inhabit, the females guard their homes and children.[1]

The Veena preside in the forests surrounding the Skatay Range. After the Empire took over Dalmasca and divided the land into two regions, even though the forces of the Empire were stronger, they had a very difficult time taking the whole of Nagxia, as the smaller groups used the forests around the Skatay Range to their advantage. While the Veena turned people away, they did still take some in and offer them refuge. However, in recent times, the fires of war have led to some of the Veena breaking the Green Word and leaving their ancestral homeland for the cities of Eorzea.[2]

Due to their strict adherence to the Green Word, Most Viera have had little to no interaction with the outside world, with very few willing to suffer exile. However, in more recent times, the Viera can be seen living in outside cities and are often held in high regard and seen as "mysterious". However, under Garlean rule, like many other peoples, Viera are treated like all others who aren’t pureblood Garlean; as lower-class citizens. This is made all the more difficult for the Viera considering they forsake their homes in search of freedom.[3]

Most Viera for both the Veena and Rava clan are born female, roughly 80%. From birth, male and female Viera children are physically identical and are referred to as Kits. Once kits reach the age of maturity, around their thirteenth nameday, their gender becomes more apparent. From this point on, the Viera will move into adulthood, where they will keep their physical youth for centuries. Where a Hyur might live to see eighty summers, Viera are said to live to see 12 score or more. [2]

The Veena, like the Rava, are tall and slender. They have large leporine ears and fair, pale skin, often compared to the caps of the mountains surrounding their home. The tallest Veena females can reach up to 75 ilms, while the males stand slightly shorter at 73 ilms.[4]

The Veena tribe is a solely matriarchal society. Following a set of laws known as The Green Word, the Viera are forbidden contact with the outside world, as well as leaving their homeland under threat of exile. This code also keeps of-age male Veena from living in the villages, instead taking up the mantle of "Wood-Warder" and protecting the settlements from any and all intruders, while the females hunt and gather for the village, and are charged with protecting their homes and young.

When the Empire invaded Dalmasca, several units were sent into the forests and jungles to round up the Viera. From this, only a few soldiers returned, and the Viera with them came of their own volition.[3]

The word "Viera" means "People of the Wood", and the people of the Veena live up to this, taking care to not only safeguard the forests from evil and invasion, but to nourish and care for the woods as well. [2]

Though the Veena have lived by the Green Word for centuries and very few used to venture beyond the land they were born to, in recent years following the wars waged by Dalmasca and the Empire, more and more Veena have been abandoning the Green Word and their ancestral birthplace in favor of setting out for cities, currently making up around 5% of the population of Dalmasca.[2]

Under the Green Word, male Veena are not permitted to live in the villages, nor hold positions of rule or power. Once a Veena is determined to be male, he will be taught the ways of the Wood-Warder. Males return to the villages infrequently, roughly every three to five summers, only to mate and take any males who have come of age to train them to protect and care for the woods, as well as how to live in the wilds. This training takes many years and is incredbily brutal, more often than not resulting in the death of the young jack. Once the jack obtains the title of master, he may then live on his own.[2]

Male Veena Viera live in extreme solitude with no community. Everything, from food to weapons to clothing must be obtained by themselves without others helping. They often live and die alone, protecting the forests in which they dwell.[2]

The Rava and Veena both share naming conventions, meaning that a Viera's name will not be indicative of what clan they are from. Generally, forenames are split into two ideologies, a "forest" name and a "city" name. A forest name is given to a Viera at birth and is used by any Viera who live in their ancestral homeland These names generally resemble and follow the grammatical structure of real-world Icelandic names. However, once a Viera leaves their homeland and sets out to explore the world, they will drop their "forest" name as a mark of breaking from the traditional Viera way of life. The Viera will then choose a name for themselves, or a "city" name. These names can be anything and have no notable markers.