Keepers of the Moon 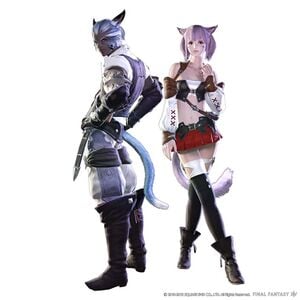 The Keepers of the Moon hunt in the dark of night.

The nocturnal among the Miqo'te have dubbed themselves the Keepers of the Moon (ムーンキーパー族, "Mūn Kīpā Zoku," meaning "Moon Keeper Group"). Shying from the garish light of day, they revel in the shroud of night, with most offering their piety to Menphina the Lover, goddess of the moon. Their tradition of hunting in the thick woodlands of the Black Shroud have for years thrown them into conflict with the forestfolk of Gridania, who condemn them as poachers. Of late, however, many Keepers of the Moon have found some small peace with the Gridanians, and taken to living within the city.[1]

Not long after their return to the realm, the Miqo'te learned of the new Eorzean alphabet.[2] During the Sixth Astral Era, the Keepers of the Moon came to reside in the Black Shroud, where they came into conflict with the people of Gridania, who saw them as little more than poachers. In recent years, the Keepers were able to reconcile their differences with the forestborn and, today, many Keepers hunt in accordance with rules set by the Trappers' League.[3]

Roughly a head shorter and smaller of body than the average Hyur, the Keepers of the Moon are distinguishable from their diurnal cousins by their fur, dark as fog, and rounder eyes with large pupils.[3] They also have larger ears, more pronounced canines, and longer, skinnier tails.[4]

Though lacking the physical stamina of the Seekers, they make up for this with a fierce strength of will and unerring instincts. With their keen intuition, Keeper hunters have been known to easily snare even targets concealed in the gloom of night.[3] Keepers are known for their reticent and brooding personalities, but are also respected and sometimes feared for their tenacity.[5]

In contrast to the Seekers of the Sun with their male-dominated tribes and harems, the fundamental unit of Keeper of the Moon society is the family, centered around a strong mother figure and her children. Keepers are known to form small communities composed of two or three families who hunt together.[3]

The ritual application of war paint to the face is still regularly practiced before going on the hunt, a tradition symbolizing their readiness to stain their hands with blood, as well as sending a message to their gods that they are prepared to serve them as warriors in the afterlife should they fall.[3] It is believed the vivid colors grant lunar powers.[4]

The men of the Keepers of the moon live a wanderer's life, and the women generally believe that men are at their best in small doses. Keepers of the Moon are not raised with a father, and so women and children keep the hearth, ply various trades, and accept game and visits from the menfolk.[6][7]

While the Keepers of the Moon have a reputation as poachers who lay waste to the natural environment as they see fit, this accounts for a minority among their people. Many Keepers today respect and abide by Trappers' League guidelines, bartering the furs and meats they procure for agricultural goods and essential commodities.[3]

As might be surmised from their self-chosen name, the majority of the Keepers of the Moon are devout followers of Menphina.[3]

The Miqo'te are uncommon in Eorzea overall, as their numbers are not great. The Keepers of the Moon are almost entirely located within the Black Shroud, and those who choose to live within Gridania account for a mere ten percent of its overall population.[3][8] There are, however, some Keeper families who remained in Ilsabard, or emigrated to lands other than Eorzea.[9]

The Keepers of the Moon are a highly matriarchal society, with family names passed down from the mother, not the father. It is said that some of these surnames have survived since the First Astral Era.[10] The more prominent families crossed the frozen seas into Eorzea in search of prey during the Fifth Umbral Era, but there are some families who have chosen to live more secluded lives, remained in their homeland, or emigrated to lands other than Eorzea, whose surnames are not commonly seen in the realm.[9]

Matriarchal strength is further displayed by the short, one- to two-syllable given names of Keeper women that closely resemble those of male Seekers of the Sun. Because they lead more solitary lives than the Seekers of the Sun, a tribal letter is not assigned to the names. Unpronounced aitches—representing a slight hissing or spitting sound that is made when the name is pronounced by the feline Miqo'te—are also present in the names.[10]

The importance of the mother to the Keepers of the Moon can also be seen in male names. In addition to taking the mother's surname, males also take the mother's forename, adding a suffix indicating the order in which they were born ('a for the first son, 'to for the second, 'li, 'sae, 'ra, 'ir, 'wo, 'ya, 'zi, and 'tan for the tenth). Though these suffixes number ten, rarely are more than two or three sons born to even the largest Keeper families. This is not by choice; nature merely sees to it that more females are born to this race.[3][10]

Notable Keepers of the Moon