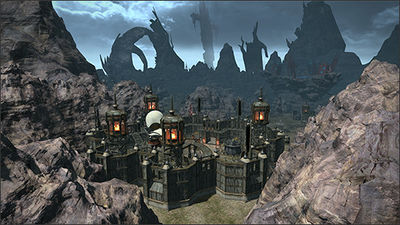 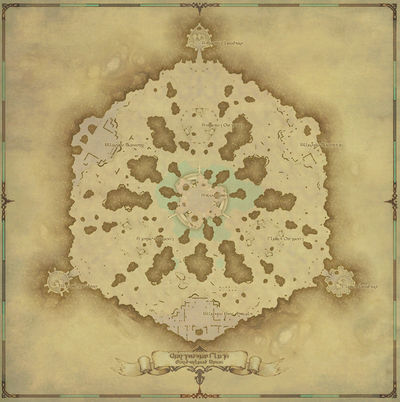 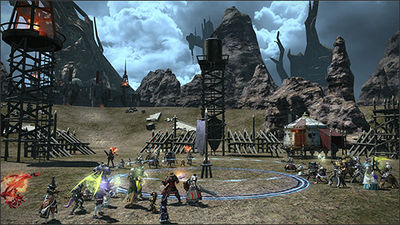 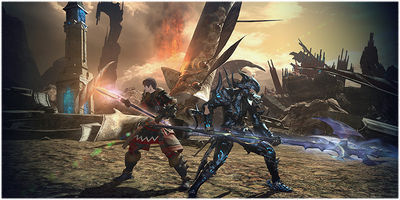 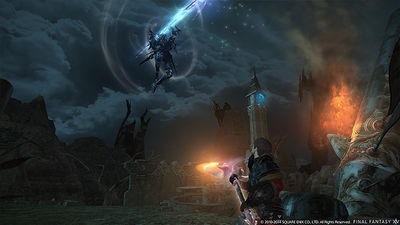 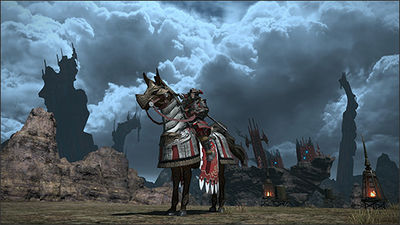 Frontline or Borderland Ruins (Secure) is a large PvP battleground featuring 3 opposing forces composed of the members of 3 Grand Companies. Up to 72 players will be able to battle for supremacy. Each of the 3 teams can have up to a full raid of 24 players. It is located in Carteneau Flats near Mor Dhona. Frontline was released in patch 2.3.

The Order of the Twin Adder: complete level 30 quest Like Civilized Men and Women (Twin Adder) by talking to Scarlet in New Gridania (x9,y11)

Players can queue to enter Frontline alone, or in a party of up to 8 players.

Players will be tasked with defending outposts established by their respective Grand Companies, as well as locating and laying claim to key Allagan ruins, holding them safe from opposing teams.

Each team will be awarded points upon completing various objectives including occupying locations of interest, defeating players from opposing teams, and defeating enemies that spawn on the field.

Occupying Locations of Interest: Locations of interest such as outposts and Allagan ruins can be identified by flags, indicating the Grand Company that currently controls them. By remaining in close proximity to these flags, players can occupy these locations to earn points for their team.

Teams will receive a fixed number of points upon claiming locations of interest, and will also accrue points over time for every location that remains occupied by their Grand Company.

Each points is marked with a flag and a circle on the ground.

Occupying locations of interest will prove key to victory, as this yields points in great quantities.

Incapacitated players will be returned to their Grand Company's landing, where they will be allowed to rejoin combat after a short delay. Returning to your landing after being incapacitated will not incur a weakness penalty, but the delay before you can rejoin the battle will lengthen each time you fall.

Players are free to use mounts on the Frontline. However, players taking damage while mounted will be inflicted with the Heavy status effect.

There is no role restriction in Frontline. Teams can have as many or few of the tank, DPS and healer classes and jobs. Players can also change their classes or jobs when they are in their team's Outpost.

You start in your Grand Company's staging area. You'll have 2 minutes to prepare before the match begins.

You can change roles in your staging area (without cooldown if it's the preparation time). Once you leave the staging area, you can't come back, unless you die.

Stand in the circles to take control of the flags and defend them.

If the flag is not controlled, the team with the most people in the circle will start capturing it. Capture speed becomes faster if the player difference is large. The player count is maxed at 4. If there are 4 people from one team and 8 from another team in the circle, it will count as if both teams have the same number of players

If a flag is controlled by your team and your enemy team has more players in the circle, the enemy team will start neutralizing it, resetting it to a non-controlled state.

Players will earn their team 5 points for every enemy player kill.

While many will remember the Calamity for the destruction it wrought upon the realm of Eorzea, that destruction was not without its blessings─one of those being the uncovering of ancient Allagan ruins hidden underneath the war-scarred Carteneau Flats and heretofore unseen for several Astral Eras. When an attempt by the Grand Companies of Eorzea to determine the control of these ruins, and more importantly the secrets they contain, through peaceful negotiations ended in failure, the city-states instead elected to solve the issue of dominion using a form of civilized warfare dubbed Frontline.


Do Not Sell My Personal Information
Retrieved from "https://ffxiv.consolegameswiki.com/mediawiki/index.php?title=Frontline&oldid=334549"
Categories: