Developed by Amajina & Sons Mineral Concern at great cost, the mine at Hidden Gorge proved to be a flash in the pan, its veins running dry within a matter of years. For a time afterwards, the site in Thanalan lay abandoned, but now it has been revived as a training ground for adventurers. In tracks of steel the battle lines have been drawn, and Falcons and Ravens will lock beaks once more in a struggle for territorial supremacy!

Hidden Gorge is a level 30 pvp introduced in patch 4.55 with Stormblood. It is a Rival Wings mode. During a Hidden Gorge campaign, teams vie for control of supplies delivered by ceruleum engines. 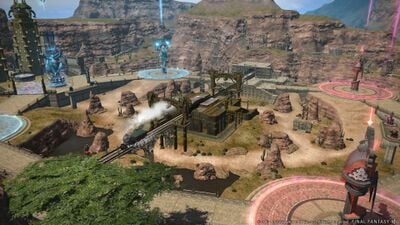 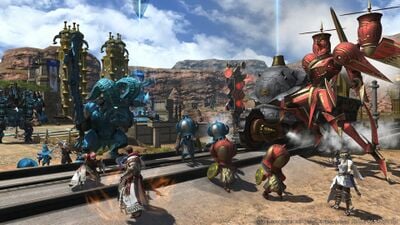 Players who abandon a Rival Wings campaign (not including players who join a match in progress or are vote kicked) will receive a penalty and be unable to register for duties for 30 minutes. Any players inactive for a period of two minutes will automatically be removed from play.

Rival Wings participants will be placed on one of two teams: the Falcons or the Ravens. Players will then begin the match at their teams' respective landing points. Matches will begin after a 45-second countdown once all players are loaded in.

Players are free to use mounts during Rival Wings campaigns. However, players taking damage while mounted will be inflicted with the Limp debuff, drastically slowing movement for 10 seconds. This status can be cured with Purify.

Using Return will teleport players back to their landing point. Moreover, this action has no recast time during Rival Wings campaigns. However, casting will be interrupted by attacks.

The first team to destroy the core located on the opponent's base will be declared the winner. In the event neither team destroys a core, victory will be decided based on each team's remaining core HP, number of towers, and tower HP, in that order.

Each team has a core located at its base, and the chief objective is to destroy the enemy's core. The core is protected by a magitek field emanating from two towers. Attempting to enter the enemy's base with both towers active will result in an instant KO, so before you can strike at the core, you must first destroy at least one of the towers. With one tower destroyed, your team can begin to damage the core; however, damage will be significantly mitigated by the remainder of the magitek field until the second tower is eliminated. 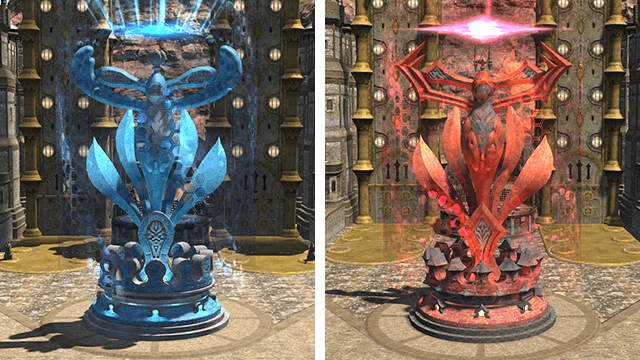 Each team has two towers that serve to protect their core. Each tower is also enveloped in a defensive field that mitigates damage taken by team members and gradually restores their HP by 4,000 per tick. Players can take advantage of the additional protection when hard-pressed by the opposing team, though machina attacks ignore the increased damage resistance. Destroying the enemy team's towers will remove the defensive fields, allow the core to be damaged, and grant ceruleum and Soaring stacks to all parties on your team. 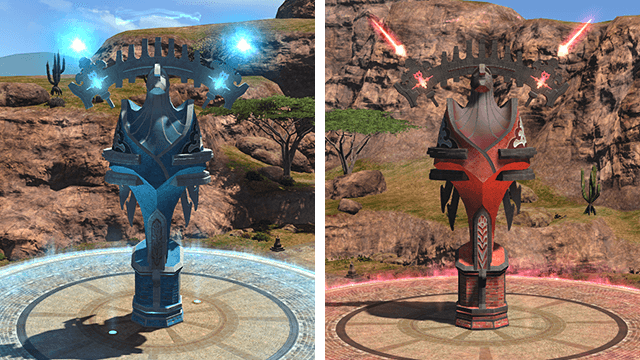 Display of Core and Tower HP

A unique UI is used to display the HP of cores and towers. Because each team's core cannot be damaged until one or more of their towers are destroyed, only the HP of towers will be displayed at the start of a match. Once the core is exposed by the destruction of at least one tower, however, its HP will also be displayed.

While cores and towers can be damaged by players directly, their high HP makes this unconventional outside of concentrated attacks from large groups.

Players can deploy three types of powerful machina in battle. 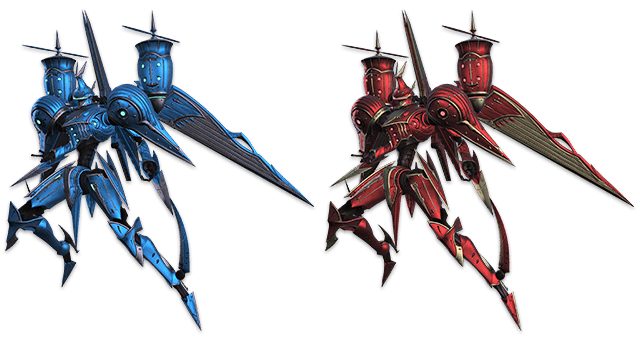 A next-generation machina ideal for combat against enemy players and machina.

A hulking machina engineered for siege warfare, it excels at wreaking havoc upon structures. 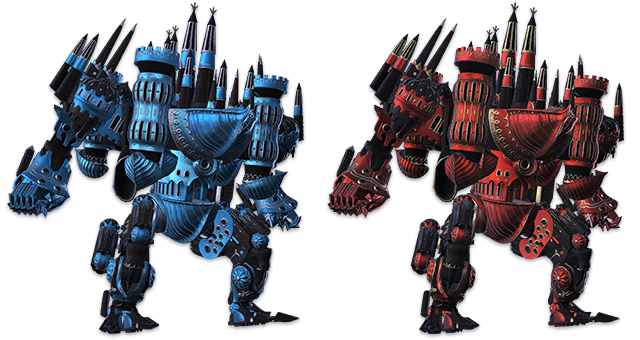 Boasting unrivaled power, Brute Justice dominates opposing players and machina on the battlefield, while also laying waste to structures with its lethal armaments.

Hangar terminals are located near the starting area for each team, from which machina can be deployed. 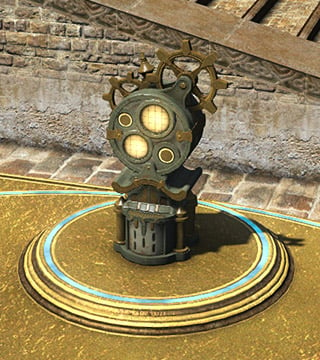 Accessing a terminal will display a unique UI containing information on available machina. 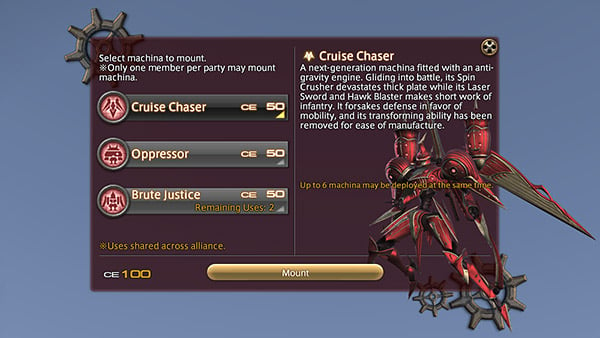 Ceruleum (CE) is required to operate machina. Players can build up ceruleum stores for their party by collecting tanks in the field or defeating enemy players and mammets up to a maximum of 100 units.

Only one machina may be operated per party at any given time, regardless of type. In the case of the Oppressor, however, the limit is two per team. Two Brute Justices can be deployed by each team per match, one becoming available for each tower you lose.

When deploying a machina, its HP will be displayed in place of the player. Its HP cannot be restored by curative actions of teammates, nor will it restore automatically when out of combat. Machina actions will expend EP, a resource that can only be restored by using the Ceruleum Refill action. Be advised that use of this action will deplete your party's ceruleum stores.

Two steam cannons are erected near each team's core. While they cannot be moved, they are powerful weapons which may prove useful in deterring enemy forces. Each cannon can be manned by one person at a time, though they are also susceptible to attack, and will receive the Limp debuff if so. 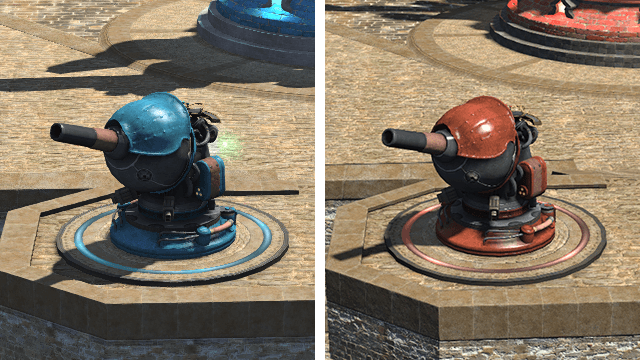 Mammets are clockwork soldiers programmed to seek out and destroy towers and cores while ignoring players. They emerge from their own core at regular intervals before striking out on a set route, and will remain in battle for a set duration. Upon detecting an enemy mammet, they will engage and attack until either side is destroyed. Mammets that arrive at an enemy tower or core will perform a powerful self-sacrificing attack, dealing 400,000 damage. Mammets receive 50% less healing when targeted by players.

These mammets boast high HP and specialize in fighting at close quarters. 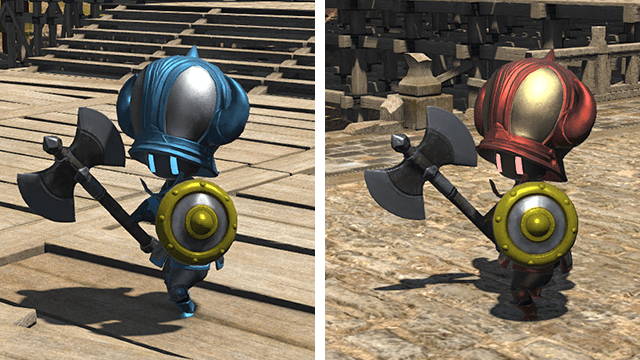 These mammets specialize in long range combat with magic-based attacks. 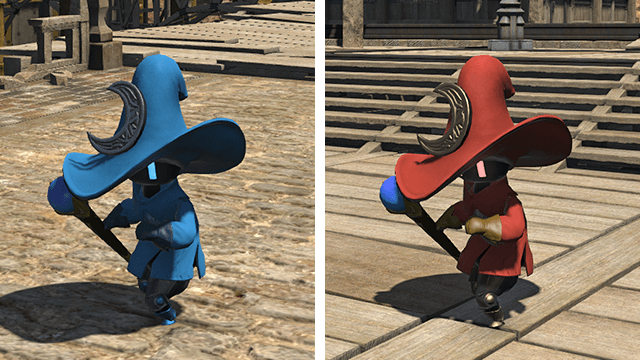 Parties can gain up to twenty units of ceruleum upon defeating an enemy mammet. These units will be distributed to all parties that engage with the mammet based on the amount of damage inflicted. Ceruleum cannot be gained from damage inflicted by other mammets. 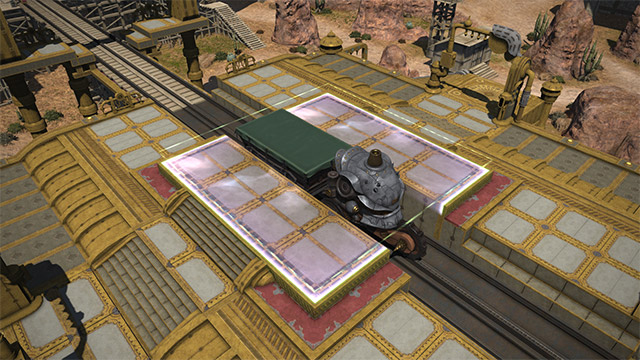 If you come into contact with a ceruleum engine while it is moving, you will incur potentially lethal damage.

A warning will sound to indicate the approach of a ceruleum engine. 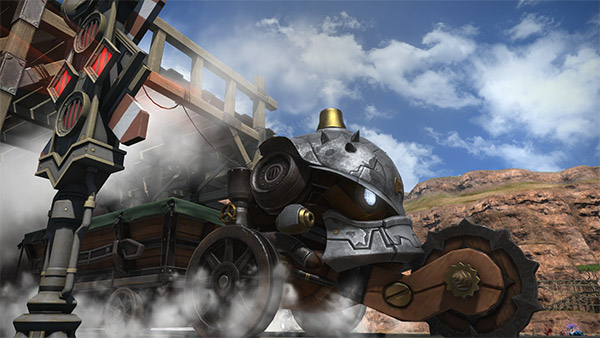 When a ceruleum engine arrives at a station, standing in the area next to the engine will cause a gauge to fill. Once it is full, your team will occupy that station. The gauge fills more quickly when you have a higher number of team members near the engine than the opponent. The greater the difference in players, the quicker the gauge fills. However, only the first four players from each team are counted. Those standing near the engine will also gain the Sheer Will status, which greatly increases damage dealt. Making use of this status will help to reduce the number of enemies and occupy the station more quickly.

Once a loading station has been occupied, a new gauge will appear indicating your control over the station. When filled, the station will be under your team's control, allowing you to claim its supplies. This gauge will only fill when your team has a number of members equal to or higher than the opponent in that area. When the supplies have been claimed, the ceruleum engine will leave the station and the gauges will be reset.

When a Ceruleum Engine is at a Loading Station

The UI displays information on when a ceruleum engine will arrive, the supplies it carries, and which team occupies the loading station.

There are four types of supplies. For the first half of the match, the ceruleum engine will deliver main ceruleum tanks, gobbiejuice, and gobtank keys at random. In the second half of the match, they will only deliver gobcrates. Each type grants its own benefits and increases the Soaring stacks of the whole team. 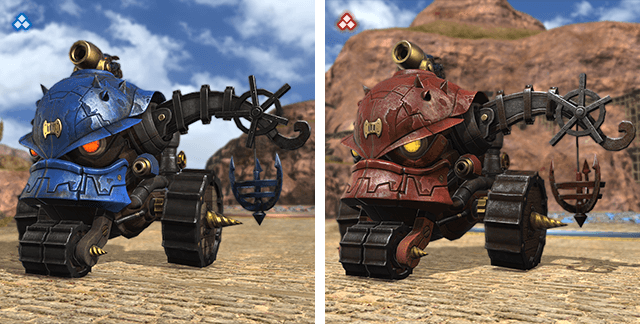 After a certain amount of time has passed, goblin mercenaries will randomly appear from the north and south mercenary bases. Initially, they will not side with either team, and will attack any player that approaches. However, it is possible to have them ally with your team. 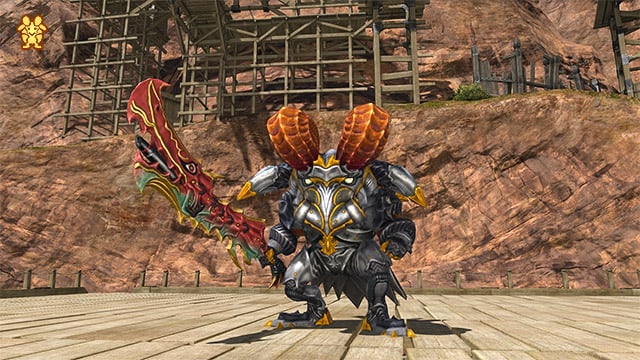 If the damage your team deals to a goblin mercenary surpasses that of the opposing team by a certain amount, it will join your side. If the mercenary's HP reaches zero before this condition has been fulfilled, it will form an alliance with whichever team dealt the most damage to it. A gauge above the goblin mercenary shows the difference in damage dealt by each team. Falcons are shown in blue and Ravens are shown in red. 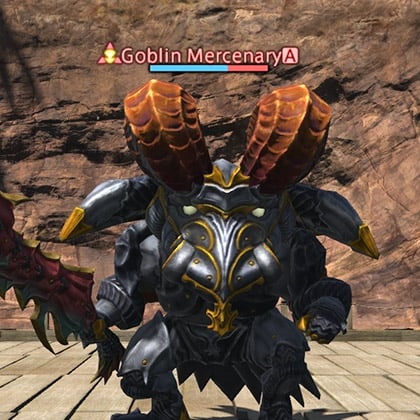 Once you have formed an alliance with a mercenary, it will appear at your team's core and will attempt to destroy the enemy's towers and core, much like a mammet would. Forming an alliance with a mercenary that appeared from the north mercenary base will cause it to travel along the northern route, with the same being true of the south mercenary base and southern route. Mercenaries are also governed by the Contractual Obligation status, and they will leave the field of battle once the status counts down to zero. After a certain amount of time passes, they will reappear from their respective base and will no longer be allied with either team. 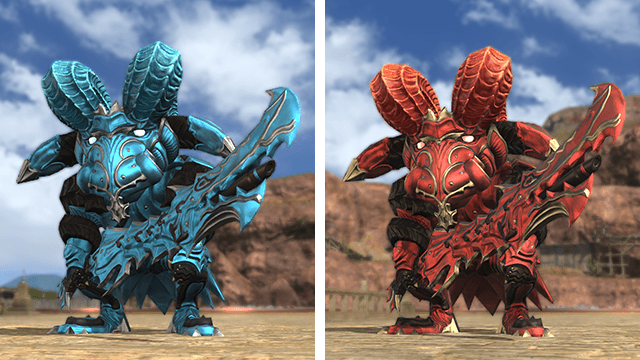 When you defeat an enemy team member, your party receives the Soaring enhancing effect. When destroying an enemy tower, your party and all parties on your team will receive the Soaring enhancing effect. This effect can stack up to twenty times, increasing all party members' damage dealt and HP restored via healing magic, while also reducing damage taken. At twenty stacks, Soaring will be replaced with the Flying High effect, which confers even greater benefits, including an increase to the rate at which the adrenaline gauge fills. However, the effects of Soaring and Flying High are stopped when riding machina. 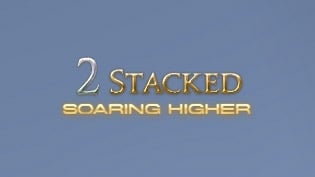 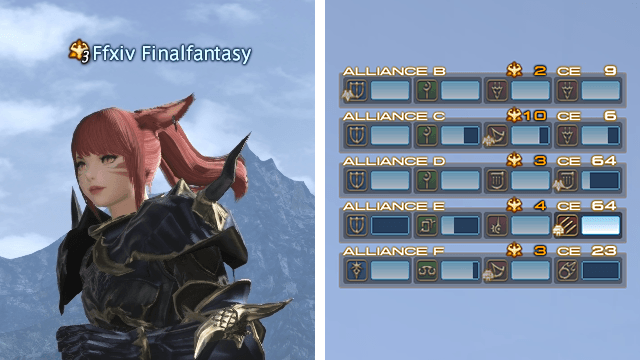 An icon will also be displayed next to the name of players under the effects of Soaring.

The Soaring effect of other parties on your team can be confirmed via the alliance list.

All players engaged in combat, including those experiencing battle high or battle fever will appear on the map and minimap when nearby.

Rival Wings makes use of a unique UI to display match information such as the deployment of machina by allies or enemy players and the units of ceruleum stored by your party. This UI also displays the number of stacks of Soaring accumulated by your party. 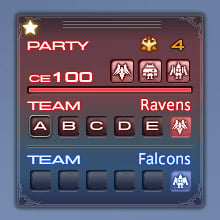 The position of these UI elements can be changed via the Duty section in HUD Layout interface under System in the main menu.

The duty list will not be displayed while participating in Rival Wings.