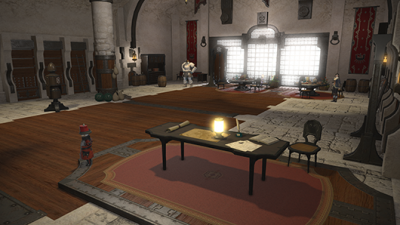 Adventurer Squadrons allow players to take command of soldiers in their respective Grand Companies. After assembling a sufficient number of NPC recruits, players can deploy a squadron of soldiers on special missions, reaping rich rewards upon their successful return.

If you change your Grand Company you will still keep your current Adventurer Squadron members but will need to obtain Second Lieutenant rank with the new Grand Company before being able to do any actions with them.

Order of the Twin Adder 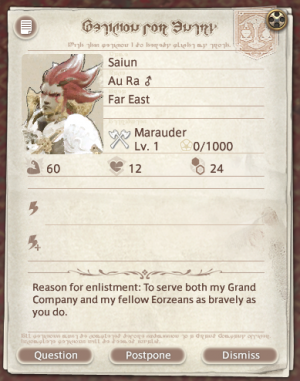 A squadron cannot be formed until you have at least four members. This can be accomplished by completing objectives in your Challenge Log, which will attract new recruits to join your squadron.

When a potential recruit piques your interest, select Question when viewing their enlistment papers to call them into the barracks and view their profile. If they are to your satisfaction, you can then recruit them to join your squadron.

The barracks has room for eight soldiers. If you have reached this limit and wish to enlist new recruits, you must first discharge one of the existing squadron members.

You may also choose to postpone a potential recruit's enlistment or dismiss them when reviewing their papers. Please note that if you postpone enlistment, you cannot review the next application until you choose to accept or dismiss the current applicant. 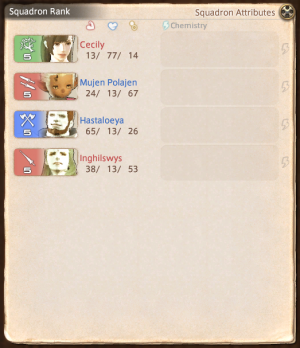 After assembling your first squadron, they must undertake the introductory mission "City Patrol." After successfully completing this mission, they may undertake training courses posted on the regimen board. Training courses will provide increases to the squadron's overall physical, mental, and tactical abilities. The focus on which attribute is improved varies from course to course, and you are free to concentrate on the areas in which you wish your squadron to excel. The training consists of A) one stat to gain 40 while sacrificing 20 of the other two stats, B) two stats gaining 20 while sacrificing 40 of the last, or C) No stat bonuses (used for leveling your units without impacting their stats).

Each training course takes 1 hour to complete (Earth time). When a training course is complete, all recruits present in the barracks will receive experience points, and the squadron's overall attributes will increase.

When your squadron is amply prepared, speak with the squadron sergeant to deploy them on a mission. Be advised that deploying your squadron requires an expenditure of company seals, with costs increasing as mission difficulty increases.

Furthermore, each mission has a minimum level requirement. At least one member of the squadron must meet this requirement to proceed. The normal 1 Tank, 1 Healer, 2 DPS composition isn't required.

There are also Command Missions, where you deploy yourself with 3 squad members. You must meet the normal role requirements for a dungeon when doing so.

4. Wait for Your Squadron to Return

Missions require 18 hours (Earth time) to complete. The time remaining until a mission is completed can be viewed by opening the Timers interface located under Duty in the main menu.

When the squadron returns from a mission, you can speak with the squadron sergeant to review a mission debriefing outlining squadron performance.

The mission is a success

The mission ends in failure

Squadron members will receive half the basic reward experience points.

Squadron EXP, which will increase the level of your recruits. You may train your recruits three times daily, though you may not train recruits currently deployed on missions. Keep this in mind before using daily training charges. Each training session lasts one hour. The sessions that re-allocate stats grant

2,000 EXP. However, you may do a comprehensive training course that does NOT re-allocate stats and instead grants

Recruits each have their own respective stat pools, which vary based on their class. For example, a Conjurer will have an incredibly high mental stat, but low physical and tactical stats. Each level seems to grant two stat points, allocated between the three stats depending on the NPC. You may check your recruit's experience points by clicking on them when they are in your barracks. Upon reaching First Lieutenant, you may purchase books to change the classes of your recruits.

You may have a squad of four recruits go out on missions. Each member added to the mission will increase the mission's statistics based on their personal allocation.

Missions each have a required stat pool in order to increase your chance of success. You have a greater chance to fail if you are below these amounts. As such, you can train your base stat pool and then supplement it with a variety of squadron members to play to whatever strengths you need. This makes it possible to math out your best odds of success on a mission with proper training and variety in recruits. Note that "Flagged" missions (ones that give rank up upon successful completion) will always fail if all three stats are not met.

Chemistry can be randomly gained after missions. Note that it must assigned (blue lightning icon) to a party member before it applies. Unassigned chemistry is lost once the next mission is commenced. Chemistry gives stat boosts or extra rewards for missions, and typically depend on race or class composition.

The first Squadron Rank up mission is available when a recruit reaches level 20. Recruits can be leveled up to 60, but this is capped by your highest level. Your squad cannot be higher leveled than your highest Job.

Your recruit's equipment will change in appearance as they level up.

Command Missions is a new feature released in patch 4.1 of Stormblood. It allows the player to enter certain dungeons alongside three of their squadron NPCs.

The introduction of the Duty Support System has put the future of the entire Adventurer Squadrons feature into doubt. Comments by YoshiP during PLLs has indicated the feature will be retired once development of Duty Support is complete.

Note: For "Flagged Missions" you must meet all three stat requirements or the mission is guaranteed to fail.

This requires a glamour prism.

Providing you have the necessary gear and glamour prism, speak with a squadron member and select Outfit from the enlistment papers. The glamour prism will be consumed upon use, but no gear will be lost in the process.

There a few restrictions when glamouring squad members. 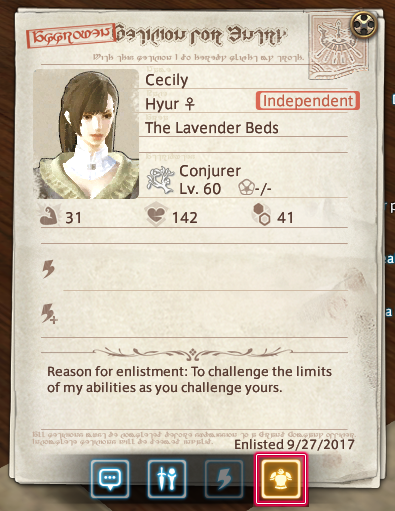 Selecting Apply Glamours after speaking with the Squadron Outfitter will start the process. 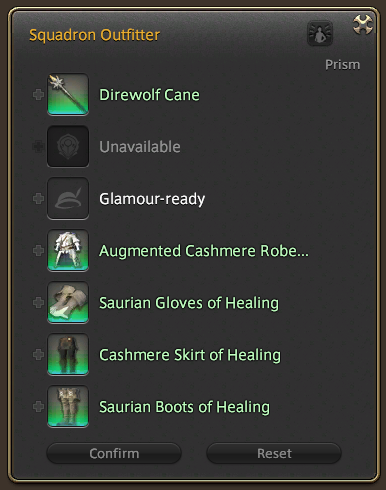 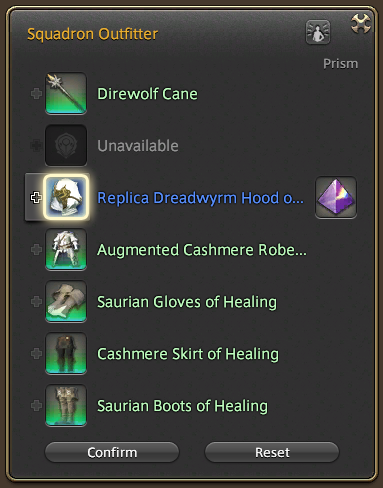