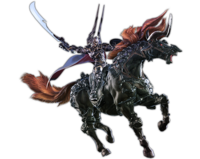 Odin is a boss found in Urth's Fount. He is a level 50 Primal found in The Black Shroud, and is part of both a FATE (Steel Reign) and a Trial (Urth's Fount).

Please note, Odin can spawn in any of the shrouds, East, North, South or Central.

Odin is also a server in the European Light Data Center.

The origin of this primal is steeped in mystery, though it is believed to have come from the time of the Allagans. Wandering around the Black Shroud, Odin has many a dark deed to its name, the most foul being the assumed murder of Lady Urth. Many refer to the Dark Divinity as a demonic villain, and Odin does little to dispel the name, cutting down any who dares approach. Some claim however, that it is the search for Lady Urth that drives Odin in endless hunt.

A study by O-App-Pesi the Seedseer has revealed that the blade itself, the Zantetsuken, is the actual body of the primal, and any who would fell the dark knight and take up the blade are immediately enthralled, allowing for Odin to be reborn over and over again. There are those who believe that the blade is a primal formed from the followers of Urth, a weapon imbued with godly might that could break free from Allagan tyranny.