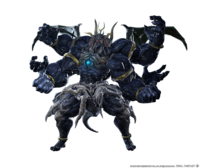 Sephirot is a boss found in Containment Bay S1T7.

Sephirot was revealed in The Gears of Change. He is one of the Warring Triad, imprisoned by the Allag.

Sephirot is also a server in the Oceanian Materia Data Center.

Sephirot, the Fiend, was a deity once worshipped by a tree-like race native to Meracydia. Brought into being for the sole purpose of repelling the Allagan invasion, Sephirot inflicted ruinous losses upon the imperial army before finally being subdued and imprisoned in the central facility of Azys Lla. And now, millennia later, this immensely powerful entity threatens to awaken, his vengeful dreams disturbed by the careless ambitions of Archbishop Thordan VII. Topple the first pillar of the Warring Triad, or wheresoever his colossal shadow falls shall be visited by unthinkable catastrophe!

"I am the end and the beginning! By my touch shall your wretched lives be blessed!"

Sephirot was summoned by a race of treelike beings native to the continent of Meracydia. Believed to be the world's first tree ascended to divinity, he is said to command the wellspring of life. Allagan records substantiate this claim, attributing the eikon with the ability to induce spontaneous growth in living organisms through the manipulation of ambient aetheric energy. Sephirot often enlarged his own form to colossal size to wreak devastation upon his enemies, earning him the title of the "Fiend" from the battered armies of Allag.

After the defeat of King Thordan and the end of the Dragonsong War, the Warrior of Light was approached by a strange masked figure named Unukalhai. He said that he was sent to seek the help of the Warrior after the machinations of Thordan had weakened the seal on the Warring Triad, who had been locked away there by the Allagan Empire long ago. Unukalhai says they need to obtain jewels from the now resummoned primals Ravana and Bismarck, as they are somehow linked to the Triad.

After obtaining the jewels, Unukalhai takes the Warrior and the Scions of the Seventh Dawn to Azys Lla to find it is being closely guarded by the Garlean Empire. The Scions make to distract the guards, while the Warrior and Unukalhai head to the chamber where Sephirot is being held, and awaken him.

They narrowly manage to defeat him, then head back to the Rising Stones to discuss their next move. On the way, they are approached by Regula van Hydrus, who admits to trying to control the power of the Eikons for the Empire. Unukalhai criticizes this decision, but Regula simply ignores this warning, threatening them to stay out of their way, and leaves them.