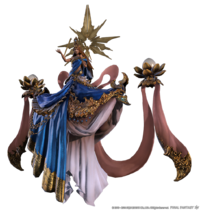 Lakshmi is a boss found in Emanation. Known as the Lady of Bliss, she is the Primal summoned by the Beastmen The Ananta.

The Lady of Bliss, beloved deity of the serpentine Ananta tribe.

Legends tell of a beauty without equal, a benevolent goddess whose coming brings the promise of halcyon days and bountiful harvests. Some believe she has imparted her life-bestowing powers to her most fervent followers─the Ananta. Lakshmi, in her infinite mercy, would shelter them from harm, granting them succor with her alluring embrace.

At the beginning of creation, the world and all who inhabited it were a form of chaos. All beings dealt only harm to one another as frenzied, wild animals, struggling to survive. Seeing this, Sri Lakshmi molded a being in her image from clay and breathed into it life and will, bringing forth the first Ananta. From her beauty emerged beauty, and by her providence was a command over earth imparted.

Lakshmi also blessed her creations with limitless fertility, allowing for birth and motherhood without a male counterpart. From this immaculate conception were born children of unlimited vitality as a blessing of the goddess.

After taking Castellum Velodyna, the Warrior of Light and the Scions of the Seventh Dawn received a message from a resistance officer who informed them that the retreating Skulls ran into the Qalyana broodmother, who had come with her warriors to free her daughter, whom the Skulls had taken hostage. However, Fordola of the Skulls cut her daughter down in front of her mothers eyes.

Outraged and grief stricken, the Qalyana called for her patron deity, and Sri Lakshmi was summoned. While the Skulls managed to flee, the Qalyana demanded that those who remained in the stronghold to come pay tribute to her goddess.

The Scions and the Warrior of Light then had to infiltrate the Qalayan stronghold to reach Lakshmi. Upon entering her chambers, they overheard the goddess saying that while they could bring the broodmother's daughter to life, her soul was gone forever. Angered by this, Alisaie decried the goddess, saying that primals only hold empty promises. The goddess fired a warning shot, telling the invaders to leave her and her people alone. Alisaie attacked regardless, needing the Warrior of Light to intervene before it was too late. With the Scions evacuating, the Warrior engaged the Lady of Bliss in battle, and laid her low.