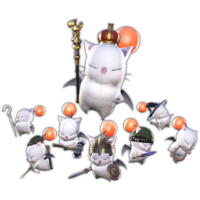 Good King Moggle Mog XII is a boss found in Thornmarch (Hard). He is revered by the Moogles of the Twelveswood.

Depicted in legends as the last king of mooglekind, the story of Good King Moggle Mog XII tells of how he helped his people flee to the world below, while he alone remained in the heavens. Long believed to be the invention of faerie tales, his all-too-real manifestation in answer to the fervent prayers of the Mogglesguard sent ripples of confusion through the halls of academia. In the face of such undeniable evidence, however, Good King Moggle Mog XII—may his royal appetite for aether lead us not unto oblivion—became the first recorded case of a non-deific entity summoned in the manner of a primal.

The mythology of the moogles holds that, in the age of gods, their ancestors dwelled peacefully in the heavens above. ...Until, that is, an incident involving a divinity's spilled cup of wine escalated into a full-scale war, the vault of the sky shuddering from the fury of the deific free-for-all. Struck by an errant goblet from an angrily flipped table, Good King Moggle Mog XII was heard to mutter "These gods must be crazy, kupo!" before resolving to lead his people to the relative safety of the world below.The difference between the heavens and the ground was so great, however, that the moogles and their tiny wings risked exhaustion ere they ever reached the surface. Thus did the wise and benevolent potentate lower a miraculously long rope from the clouds, holding fast to one end while his subjects clambered down at a more manageable pace—a solution that ultimately granted the moogles salvation but stranded their ruler up above...Over the generations, the moogles have refused to appoint a new king, intent in their belief that Good King Moggle Mog XII—may his noble sacrifice never be forgotten—will one day return to lead his people.