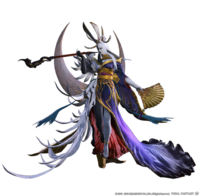 Tsukuyomi is a boss found in Castrum Fluminis. She is known as the goddess of the moon and the divinity of night. Yotsuyu Naeuri and Asahi sas Brutus summoned this primal under Zenos Yae Galvus's plan to cause Doma to violate the peace treaty with Garlemald. Yotsuyu, The Acting Viceroy of Doma, becomes the host of Tsukuyomi and battles with the Warrior of Light.

Tsukuyomi, divinity of night and the moon, was a Primal summoned by Yotsuyu goe Brutus, acting viceroy of Doma. Although Tsukuyomi is never attributed a gender in myth, in literature and art it is almost always associated with a male figure. However, as she offered herself as a vessel, the deity Yotsuyu called forth became a female.

It is believed that Tsukuyomi was born from the mirrored surface of the Maso Kagami, a relic of the time of the first gods. Because of this, Tsukuyomi was given dominion over the night and the moon. This deity also was charged with leading the souls of the dead to the underworld, a task they performed in "gentle quietude". It is believed that this calm nature was born of necesseity to balance the natures of Amaterasu and Susano, also born at the beginning of creation.

After the Warrior of Light defeated Zenos yae Galvus and freed Ala Mhigo, Yotsuyu (or as she was referred to, Tsuyu) turned up in Kugane with Gosetsu bearing no memory of who she once was. At the time, Hien was content to let her stay in Doma as a citizen, however the Garlean Empire sent an envoy of peace made up of the populares seemingly wanting peace between the two nations. The leader of this mission and acting emissary from the Empire, Asahi sought to do a prisoner exchange, citizens of Doma in exchange for Yotsuyu, who he revealed was also his adopted sister. Hien and the [Scions of the Seventh Dawn]] deliberated and came to the agreement that if he could return her memories to her, she would be released as a citizen of Doma and could return to the Empire. If he could not however, she would remain where she was. Asahi agreed to this and left, but not before uttering threats to the Warrior of Light for his part in Zenos' downfall.

Asahi visited twice after that, once speaking to Tsuyu privately and giving her a mirror, and the next bringing their adoptive parents to see her. Seeing her abusive parents, as well as an unfortunate interaction with some villagers, Yotsuyu recovered her memories. She escaped her room and intended to end her own life, but her parents found her and goaded her into being the monster everyone believed her to be. Conceding to this fate, she killed her parents where they stood. Asahi, seeing this, promised her a revenge beyond her wildest dreams, and brought her back to the Empire.

On the day of the prisoner exchange, Yotsuyu appeared, claiming she would be the ruler of Doma once more. With fury in her heart and clutching the mirror her brother gave her, which turned out to be a Kojin relic capable of summoning, several boxes full of crystals sprung open at the press of a switch in Asahi's hand, and Yotsuyu began channeling a primal, offering her body as a vessel for Tsukuyomi. Hien and the Scions evacuated the area, leaving the primal in the care of the Warrior of Light. Loathe though they were to do it, the Warrior slayed the deity.

With Yotsuyu laying at the Warrior's feet and barely clinging to life, Asahi entered the scene, claiming that by her summoning, the peace treaty had been undone. He then proceeded to shoot Yotsuyu, ranting and raving madly while pummeling her barely conscious body.

In a final act of vengeance, She managed to summon the last of her strength as a primal and ran her brother through, telling him that he was the first she swore to kill. With her revenge finally complete, she closed her eyes to rest a final time.