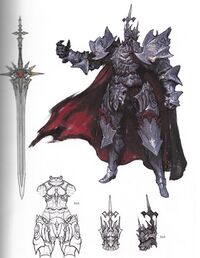 "By my blessing shall all men be sanctified, and an endless era of peace begin."

After years of nurturing the deification of Ishgard's founding father, Archbishop Thordan VII succeeded in infusing his own form with the soul of King Thordan.The ritual used to imbue the archbishop's mortal vessel with the divine essence of his ancestor followed the same principle as that employed by Ysayle and her summoning of Saint Shiva—a rite previously perfected with the Heavens' Ward and their primal incarnations of the legendary knights twelve.Drawing upon the incalculable might of one of Nidhogg's eyes and bolstered by a thousand years of unquestioning faith, the manifestation of King Thordan far exceeded the power of any existing primal. But driven by his monumental ambitions, the archbishop sought to absorb the infinite energies of the Warring Triad and thus ascend to true divinity. As an eternal god-king, Thordan meant to convert all to his cause, be they man or dragon, and "bless" the world with an unending age of harmony.

King Thordan is a boss found in The Singularity Reactor.

King Thordan reigned over the Elezen people who moved to Abalathia's Spine hundreds of years prior. Jealous and untrusting of the power of the dragons they shared the land with, Thordan sought to oppress them and take their magic power for himself. Under the guidance of an Ascian, he and his knights twelve found the secret to their power: Thier eyes. Tricking a dragon into a peace talk, he and his knights trapped and killed a dragon, stealing her eyes and absorbing their power, far exceeding the power of any mortal. This was the start of the Dragonsong War, and the beginning of Nidhogg's rampage against the people who would eventually build and inhabit Ishgard.

After betraying the dragons and confirming the worst fears and suspicions of Nidhogg, the great wyrm attacked Thordan and his knights, killing him and most of the knights in a greusome battle. However, the few that survived were able to suppress the dragon and steal his eyes, sending him fleeing. Desperate to cover up the truth of what happened, the surviving knights and the people who would eventually go on to form the Church of Ishgard fabricated a lie and retold history as they saw fit to create a narrative wherein Thordan and his knights bravely battled against the dragons to protect the people of Ishgard, and erased three hundred years of peace and prosperity between man and dragon. In doing so, Thordan became a central figure in their religion, and the people worshipped his name. They would pray to him and his knights in times of hardship, so much so that they eventually became true dieties, able to be summoned as primals into the bodies of Thordan VII and his knights twelve, in order to attempt to destroy the dragons in the climax of the Dragonsong War.

At the height of the Dragonsong War, the Scions of the Seventh Dawn and the Warrior of Light learned the truth of Thordan's deeds and sought to confront the current Bishop, Thordan VII about what he knew. However, Thordan incited panic in the streets, causing riots to allow him and his knights to escape to the floating Allagan city, Azys Lla. Not to be deterred, however, The Scions and the Warrior fought their way past the barrier and into the city to confront Thordan. After doing battle with the Ascians who stood between them and the bishop, Thordan showed himself, revealing that he and his knights had gained the power to summon King Thordan and his knights twelve into their bodies, much in the way Ysayle did with Shiva, and slayed the remaining Ascian and absorbed his Aether. Then, using the power of Nidhogg's Eye, he summoned his weapon and told the Warrior of Light he would not stand for this corruption of his city and their religion, that he would put an end to the dragons with Thordan's power, and if they took umbrage with this, they would feel the sting of his sword.

The Warrior of Light refused to back down, however, and took Thordan up on his challenge. Facing him and his holy knights twelve in battle, The Warrior finally managed to lay them all low, saving both the Ishgardians and the dragons in the process.