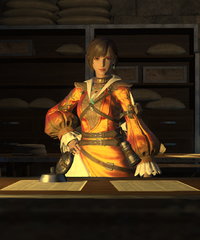 Once a weapons merchant in Ul'dah, Rowena worked to make friends in all the right places, and was soon able to shift her focus to antiquities. Though this brought her great fortune, she remains entirely single-minded in her pursuit of wealth. In this regard, she sees little difference between people and goods, and has lured many a brilliant tradesman and merchant into her service with the irresistible promise of coin. There are rumors that the Midlander woman wishes to one day make a foray into the world of Ul'dahn politics-though Rowena herself has not made these intentions clear.
At some point in the past, she seems to have been married to Gerolt, the realm's foremost weaponsmith. However, she is unwed at present, and means to stay so. As to her age, one can only guess, as a lady never tells. The same can be said of her surname-a secret she, for some unfathomable reason, keeps tight to her bosom.

Rowena is a Hyur found in Mor Dhona.

In patch 3.0, The Splendors Exchange was introduced. It allows players to craft or gather collectable items to be exchanged for

Rowena is an industrious woman who deals in rare and invaluable historical items. Starting out as a humble traveling weapons merchant, she struck her fortune when an Ishgardian noble took a keen interest in her collection, noting its quality, and hired her to help him barter for ancient relics and treasures. She soon made a name for herself as a shrewd merchant and an artisan, coming into contact with Gerolt Blackthorn, a master blacksmith, and Heidolf, the one who trained him. She became a patron of their goods, and eventually fell in love with Gerolt. When it turned out that Heidolf was selling shoddy wares under Gerolt's name to make a quick profit, Rowena discovered what he was doing and threatened to cut ties with him unless he stopped. Gerolt found out about Heidolf's plan to have her assassinated, he got into a fist fight with his master for her honor, but was badly beaten. He fled the city, and Rowena, having fallen in love with him, left with him, marrying him sometime later.

Unfortunately, upon fleeing with Gerolt, she stole a massive sum of funds and treasure from her clients, and was being hunted. Not wanting his love to suffer for him, he "borrowed" the money from her under the ruse to open a shop, and disappeared, paying back her debt. She remained unaware that he had done this, finding him as a drunkard years later and hired him as a blacksmith to help the Warrior of Light forge an ancient Relic weapon in order to help repay his debt to her.

She has helped fund the building of Mor Dhona and reconstruction of Idyllshire, and was given a large storehouse in both areas as a way of thanks. Naming the buildings the House of Splendors, she has hired several workers to help gather and peddle her ancient wares, trading in various currencies, such as the ancient various Tomestones of Eras past, or Collectables crafted by artisans all across Eorzea. She has many vendors across all of the Three Great Continents.