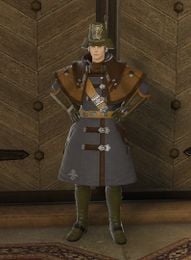 We Immortal Flames fight to protect Ul'Dah from all who would threaten her. Ever do we swear to uphold our oath: for coin and country!

Swift is a Hyur found in Ul'dah - Steps of Nald.

The second son of a Midlander merchant family, Swift Ryder wanted for nothing as a child. Indeed, his passion for Chocobo racing stems from his affluent youth. Nonetheless, he chose to become an adventurer, and follow in the footsteps of his older brother Jakys. The two had both learned how to defend themselves with a sword as boys, and these skills lent themselves well to success. Swift distinguished himself against the Amalj'aa, and soon stood above others of the same profession. He joined the Immortal Flames at his brother's behest. When Jakys perished at the Battle of Carteneau, Swift was wrought with grief, for the two had rarely been parted. Eventually, he recovered, and has sworn two oaths that he holds close to his heart even at the age of twenty eight: one to serve as commander of the Free Brigade, and another to avenge his brother's death.