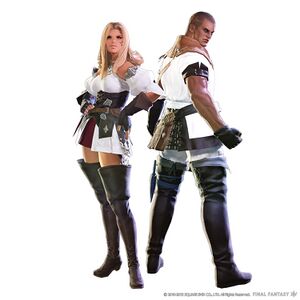 The Highlanders claim the high mountains of Eorzea as home.

Said to be the first Hyur to reach Eorzea in the Sixth Astral Era, the Highlanders (ハイランダー族, "Hairandā Zoku," meaning "Highlander Group") descend from a people who followed the stars to the mountains of Gyr Abania in the wake of the Sixth Umbral Calamity and their name derives from their history of dominion over the barren, mountainous region. Compared to their Midlander brethren, the Highlanders are noticeably larger in build and musculature.[1]

The Highlanders founded the city-state of Ala Mhigo, a bastion of military might until its fall to the Garlean invasion in 1557 of the Sixth Astral Era. Following the fall of their homeland, they became a relatively rare sight in Eorzea, though many have sought refuge in the bustling mercantile nation of Ul'dah and the settlement of Little Ala Mhigo in southern Thanalan.[2] 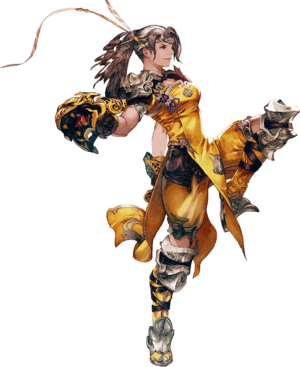 As the Fifth Astral Era drew to its calamitous end, many and more of Eorzea's people fled their homes, forced into wandering with no clear destination in mind beyond higher ground to escape the ever-rising waters.[3] The ancestors of the Highlander clan followed the stars to safety during the floods of the Sixth Umbral Calamity. According to their legends, Rhalgr cast a great beacon into the sky to lead His people to safety, and it was this burning comet in the night sky that led a number of errant souls to Gyr Abania in the eastern reaches of Abalathia's Spine.[2]

While they found salvation from the floods, the Highlanders were one among many different races and nations newly come to a land largely bereft of natural resources. Life among the peaks proved harsh and unforgiving and, before long, the survivors fractured into factions, fighting bitterly over what little resources there were to be had. These feuds continued for many long years. On occasion, one clan of Highlanders would win a string of victories, and grow larger by absorbing their defeated foes into their ranks—only to be encircled by an alliance of the remaining tribes and defeated in turn. The loose alliance would dissolve after the victory for lack of a common enemy, and the pattern would repeat again.[3]

In 1100 of the Sixth Astral Era, a man of powerful lineage named Anshelm Cotter set out to subjugate the other clans once and for all. Using his incomparable tactical genius, he scattered his enemies before the march of his forces and united the lands of Gyr Abania for the first time in history. Wary of having his lands swept from the north, he built a citadel on the shores of the Loch Seld atop a steep cliff. With its completion in 1135, the fortress city-state of Ala Mhigo was born.[3]

For centuries, Ala Mhigo stood as the bulwark between Ilsabard and Aldenard, preventing incursion from Hyuran nomads from the east. Highlander mercenaries gained renown for their strength and valor, and were employed to aid the city-states of Ul'dah and the fledgling colony of Sharlayan. However, the popularity of trading on the high seas caused a decline in travel through Ala Mhigo's toll roads. In 1468, King Manfred of Ala Mhigo attempted to take the East Shroud as his own, but his forces were pushed back a year after the Autumn War began.[3]

The decline of the royal house caused the Fist of Rhalgr, an order of martial monastics founded in Gyr Abania, to increase in power and status. This was misliked by Ala Mhigo's last ruler, King Theodoric, who purged the monks and any who he deemed a threat to his rule. While the Ala Mhigan Resistance successfully ended the King of Ruin's regime in 1557 of the Sixth Astral Era, the XIVth Imperial Legion of the Garlean Empire quickly swept the city-state.[3]

Ala Mhigo became the domain of imperial viceroy and XIVth Legion legatus Gaius van Baelsar. Those Highlanders who remained behind Baelsar's Wall languished under imperial tyranny, while others sought refuge in the Black Shroud and Thanalan. Because of the elementals' capricious will, many and more were turned away from Gridania, and were forced to petition Ul'dah for aid.

Most Highlanders outside of Gyr Abania live in the settlement of Little Ala Mhigo in southern Thanalan, but they are also a common sight in the city-state proper. A group of Ala Mhigans also fled westward across Abalathia's Spine to the hinterlands of Dravania, where they were permitted to join in the exodus of Sharlayan and cross the Northern Empty to the scholars' motherland in Old Sharlayan.[4]

Though Ala Mhigans account for the majority of the Highlander population in Eorzea, they also make up a minority population of Ul'dah (not counting refugees) with some even holding positions of high status as Ul'dahn nobility. These Highlanders do not appear to maintain any meaningful kinship with their Ala Mhigan counterparts, and make up about ten percent of the overall Ul'dahn population.[5]

Highlanders are noticeably taller and more muscular than Midlanders, with full-grown men reaching towering heights of nigh eighty ilms. Some posit that the impressive Highlander physique is the fruit of countless generations spent residing in harsh, unforgiving mountain climes, where the air is thin and each day a struggle for survival. Though some discount this theory, none can deny that the physical prowess of the Highlanders greatly outstrips that of their Midlander cousins.[2]

The Highlander clan founded the city-state of Ala Mhigo.

With a spiritual tradition dating back to times of yore, Highlanders are known to sport wood-carved talismans woven into their underclothes, and votive tattoos adorning their bodies.[2] Ancient Highlander practices such as tooth filing are very much alive today.[6] They are also known to shave their eyebrows, give themselves scars, and pull out their teeth to look more imposing.[7] While some find Highlander aesthetic sensibilities crude, one cannot deny their uniqueness and the manner in which they evoke unadulterated strength of nature.[2]

Such ruggedness can also been seen in their preferred fare—Highlanders often dine on simple yet impressive dishes such as massive aldgoat steaks, seared perfectly to seal the natural juices. Overcooking is taboo in Highlander kitchens, to the degree that some consider them raw meat eaters.[2]

Highlanders are a very violent people, their clan having a long history of war amongst each other and against the Midlanders.[7] Both Highlander men and women are trained in the arts of combat from childhood.[8]

The clan also has a long history of mercenary work, and Highlanders today often put their considerable martial talents to use as sellswords and gladiators.[2]

The Highlander clan accounts for the majority population of Ala Mhigo, making up about sixty percent of its total population.[9] They also dwell in the city-state of Ul'dah, where they make up about ten percent of the populace (though refugees are not included in this number).[10] As a few Ala Mhigans were permitted to dwell within the Black Shroud, there exists a minority population of Highlander refugees within the sylvan city-state.[2]

Like Midlanders, Highlander names have their origins in words of the common tongue. One difference of note is the prevalence of violent-sounding surnames, rooted in epithets and monikers earned on the battlefields of war-torn Gyr Abania. Given names display the influence of Northern dialects, often bearing more than a passing resemblance to those of the Roegadyn Sea Wolf clan. "Bastard son of a Sea Wolf" is an insult often hurled at Highlanders in tavern brawls, not infrequently with painful consequences for the fool who uttered it.[2] Highlander first names are remarkably similar to medieval European names that have Germanic or Normandic roots.[11] 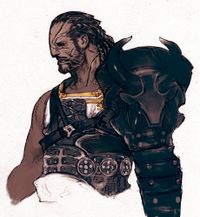