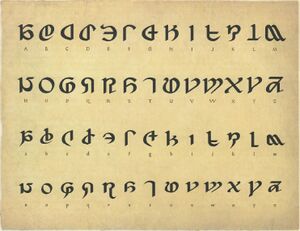 The Eorzean Alphabet, modernized from both Allagan letters, as well as the letters of the clergy from the Fourth Astral Era.

In the Third Astral Era, the people of Allag were all well learned and well written. Following the Fourth Umbral Calamity, these letters and learnings were seen as a sin, and were rejected by the people. Only the clergy were taught their letters, in an effort to keep the people uneducated and maintain the status quo. Though based on the letters of Allag, they were altered and changed so only those within the church knew how to fully read and write. By the end of the Fourth Astral Era, almost the entire population was illiterate and the alphabet had evolved significantly. In the Fifth Astral Era, the education of letters became more widespread, and the modern Eorzean Alphabet began to take shape.

There was still much confusion about the origins of the language and the language used by the Allagans, until audio recordings from the Allagan Empire were discovered, shedding light on the similarities between the two languages,and it was hypothesized that during The Forgotten Age, all knowledge of written language was forgotten.

In modern times, the Eorzean Alphabet consists of twenty-six letters, and are written in both upper and lower case. The way some letters are written, as well as the shape of them have given rise to the theory that the language used to read from right to left instead of left to right. Currently, it is estimated that just over half of the population is literate, however there is little to no consensus as to how things should be spelled, capitalized, or punctuated, leading to a wide variance in written material.